Our Formula 1 columnist Alice Powell didn’t just return to racing last weekend as W Series returned on the Styrian Grand Prix support bill – she won from pole! Here’s her take on her victory and how W Series’ relaunch was received.

Winning from pole – having also topped practice – in W Series’ first race as a Formula 1 support class came as a little bit of a surprise to me.

The Anglesey pre-season test went well, but it’s a totally different track to the Red Bull Ring and all the other circuits we’ll be driving on this season.

I didn’t really have any expectations, which sounds bizarre. But I didn’t know what everyone else’s pace was and I’d only driven the circuit on a simulator.

Free practice was good but, again, I was cautious because I thought people might get up to speed in qualifying. And then qualifying went really well. I knew our race pace was OK and I just needed to get a good launch off the line. Once I did that I was able to have a comfortable race.

I had built up such a good gap that I can’t write what I said in my head when the safety car came out at the end of the race! But I planned the restart through, felt confident and just controlled the race to the end.

This was a very big weekend for W Series, after nearly two years without any racing and making its debut on the F1 bill. But, in the car, it didn’t feel different to any other race weekend, to be honest.

Of course, you acknowledge that you’re at an F1 weekend, but I was just determined to treat it exactly like any other race. And I’ll take the same approach for the rest of the season – starting with round two in Austria this Saturday – though, obviously, the British Grand Prix round with the packed grandstands will feel extra special for me and my fellow Brits on the grid. 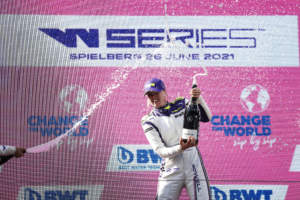 The most important thing is to stay consistent and keep bringing home decent points. I know some areas I need to work on myself after the first weekend and maybe I’ll learn something else when I get chance to watch the TV coverage of the race back as well. I heard it was quite chaotic behind me – I didn’t see any of that but it’s great that the race was really exciting. The reception it’s had has been really good.

I totally understand that becoming an F1 support series moves people’s perceptions of W Series up another notch and maybe changes expectations on the drivers and where their careers will go, especially as it offers FIA superlicence points now and F1 is so supportive of W Series’ mission to inspire young girls and bring more women into the sport.

Having had many years out of racing, I try to just keep my mind open about what happens next. That’s really important. Obviously, I’d love to have an opportunity to drive a Formula 1 car – anyone would snap a team’s hand off for that opportunity. But there are so many other things that you can look at, such as sportscar racing or Formula E. Formula 1 is obviously at the very top but there are so many great series out there. I’m not sat here calculating my superlicence points, I’m just being open-minded and keeping my feet on the ground.

People will sometimes make comments that aren’t positive, but you just have to brush them off and focus on yourself. There were some references to the fact I’m now 28 years old and Sarah Moore – who finished second – is 27.

The conversation shouldn’t really be about how old drivers are, but what led to the situations where they’re only getting their career opportunities at those ages.

We know how expensive motorsport is and changes on that front need to take place from karting upwards. When you get to Formula 2 and Formula 3 budgets it can be crazy money.

I missed out on some great years of racing from the age of 21 until W Series came along when I was 26. Those were vital years I lost, and that was due to budget.

Alongside my own racing, I’m working with Abbi Pulling and Ella Stevens as they get started in their careers. Ella’s learning in karting and Abbi is doing great things in British F4.

I often say to them “if only W Series was around when I was your age!”. Things are getting better and the likes of Ella and Abbi are going to have great opportunities because of the work W Series is doing, with Abbi already part of W Series’ reserve driver line-up.

But I always make clear to people that W Series is not Abbi and Ella’s end goal. Their end goal is to reach the very top, and that is Formula 1.

Of the 30 drivers on Ella’s grid there are usually only two or three girls, so the number is still small but it’s going in the right direction. Certainly, when I go to kart circuits now I see a lot more female karters about and it’s definitely a big difference from when I was karting.

On the British Touring Car Championship bill where F4 has its races you see more female drivers, mechanics and engineers, and obviously here at W Series there are plenty of females on the team as well as us driving the cars.

We were all racing last weekend. Ella had some really bad luck in her final, but her pace was there to be in the top 10 in a tough championship. Abbi had a great weekend in British F4 with two third-placed finishes and I won! So, it was a very proud weekend for Alice Powell Racing.

Watch round two of the 2021 W Series season from the Red Bull Ring, Austria, live and free-to-air on Channel 4 from 3pm UK time on Saturday 3 July