Giuliano Alesi – a Ferrari Formula 1 junior – made his Formula 2 debut with Trident last year and scored a best finish of fifth and finished 15th, having spent three seasons in GP3 before where he took four wins, all in reversed-grid races.

The French driver has now switched to HWA for the team’s first season in the category, with the squad taking over Arden’s entry which was on course for a strong top 10 finish with Anthoine Hubert last year before he passed away at Spa following injuries related to a crash at Raidillon.

Alesi was highly critical that Formula 2 doesn’t have a cost cap as Formula 1 has introduced.

Ferrari F40s are worth around €1 million on the used car market, while a budget in Formula 2 can be as much as €1.8 million.

“First of all in F2 this year It’s going to be a nightmare because of all these races together,” Alesi told Sky Sports F1.

“We talk about the budget cap but nothing was for Formula 2, they didn’t change the price of the fee of anything.

“So I’m sure a lot of drivers will not finish the season and that will be a disastrous season for the Formula 2 and Formula 3 drivers.

“So I hope in this big mess something will change and will give the opportunity of these drivers who make a big investment not only on the money side but also in the life side because they quit school, they quit university because they dream to be a racer and nobody is looking after them.

“I’m very very sad about that because I’m an ex-Formula 1 driver, I have connections but I had to sell my Ferrari F40 to give the budget of my son to race in Formula 2. 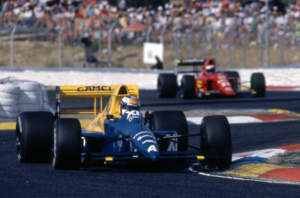 “And why? Because it’s almost mission impossible to find sponsorship.

“And in the meantime, in front of you you have just the prices of the tools – too expensive, and nobody wants to change it. So that will not stay forever.

Jean was given the Ferrari F40 by the manufacturer as part of his original contract when he raced with the team from 1991-1995. He scored the drive after two seasons with Tyrrell, and won for the Scuderia in Canada in 1995 before leaving to join Benetton.

He added: “In the family, we do things with a passion and to have a Ferrari F40 in the garage or to see my son racing is no comparison.

59 mins ago NASCAR No Comments