Who would have won the IndyCar iRacing title?

May 4 2020
By Valentin Khorounzhiy
No Comments
Share this article

The IndyCar iRacing Challenge concluded this Saturday in a haze of controversy and general disappointment over some drivers’ conduct in the Indianapolis oval finale, yet almost every previous step suggested a real-deal series, imbued with a veneer of professionalism by both the TV coverage and the effort put in by the participants.

It was legitimate enough, in fact, to make it a surprise in hindsight that IndyCar had opted to crown no champion and award no points – although whether a championship format would’ve made some of Sunday’s offending drivers take the event more seriously or just made for a bigger letdown is up for debate.

At The Race, we’ve assembled a table of what the 2020 IndyCar iRacing Challenge standings would’ve looked like had it used the current IndyCar points system. 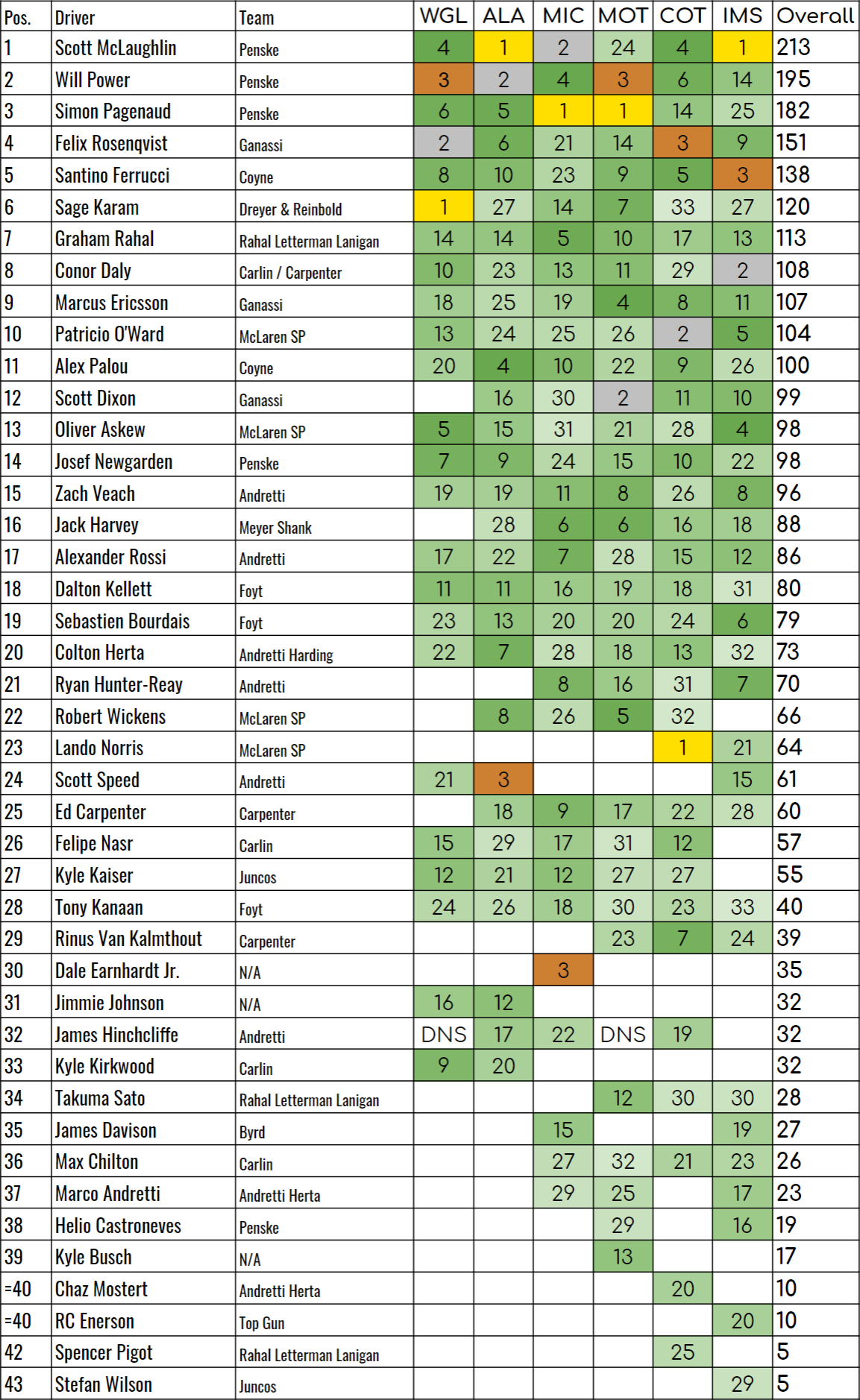 Two-time Supercars regular Scott McLaughlin was in sensational form during his virtual foray into American open-wheel racing, and would’ve emerged as champion ahead of his two IndyCar-regular team-mates Will Power and Simon Pagenaud.

The latter two would’ve entered the IMS finale level on points, but with both caught up in incidents McLaughlin would’ve been on course for the title even before the regrettable late-race events paved the way for his second win.

Sage Karam led the most laps of anyone in the INDYCAR Challenge. Only Karam and Will Power led over 30 laps.
–#WIXFilters #DrivenByDRR pic.twitter.com/x8mbPllvcs

Every other driver in the top 10 has at least one proper IndyCar campaign (or half-campaign, in Patricio O’Ward’s case) under their belt. Aided by Oliver Askew’s IMS heartbreak, Dale Coyne Racing’s Alex Palou would’ve taken top rookie honours.

Being that this is single-make iRacing competition, the battle between Chevrolet and Honda was purely nominal, fought along the lines of the respective virtual prowess of its driver rosters rather than any engineering capability.

In any case, Chevrolet-badged entries won the first four of the six races and it would’ve handily outscored the Honda camp if there was a title race run to the real-life series’ manufacturer championship ruleset. The two top drivers would’ve scored for each camp – with the full-season entry requirement waived by us in this case due to the distinction being unclear.

It is worth noting that a number of drivers ran in entries that were representing neither Honda nor Chevrolet, presumably due to contractual and sponsorship considerations. This included McLaughlin, but only from the third round onwards, and Norris, albeit his virtual car did actually carry the Chevy bowtie.

The road course honours would’ve gone to McLaughlin, who finished no lower than fourth in each of the three races. Meanwhile, Rosenqvist’s close third place shows that, much like in his 2019 debut real-life season, he was a road-course standout but came nowhere near that form on ovals.

Pagenaud’s two oval wins would’ve taken care of the ovals’ title race, especially as no driver managed to place even in the top 10 in all three contests.

The real-life IndyCar season finale pays double points, as does the calendar equivalent of the mini-series’ IMS oval race – the Indy 500.

Switching that to double points would’ve obviously made no difference to the championship here, given McLaughlin won the race, or indeed the top five, but the likes of Daly, O’Ward and Askew would’ve been elevated into the top eight.

Using the F1 points system, McLaughlin would’ve been an even more comfortable champion, with 92 points to Power’s 69 and Pagenaud’s 68. Norris’ sole win would’ve taken him into eighth place.

Under NASCAR’s points, however, ignoring the play-offs and stages, it would’ve been very close between McLaughlin and Power, with bonuses for laps led swinging it in favour of the latter, 221 to 218.

More on the fallout from IndyCar's Indianapolis crashfest
Thank you for your feedback!

17 mins ago IndyCar No Comments