Brandon Traino successfully defended his 2019 iRacing Indy 500 title by winning the 2020 iteration of the virtual race.

Traino thus became the first driver to win the top split portion of the event more than once.

He started the race from second on the grid and spent much of the race up at the front and fighting for first place with Michele Constantini.

With only six laps to go, Constantini crashed out after losing control of the rear of the car while rounding Turn 1.

The race went green again with one lap of flat-out racing still to run. Tanner Watkins had moved his way into first by carrying out an alternate pitstop strategy compared to the leaders.

But Traino was able to take the lead back into Turn 3, and stayed ahead of the pack to win by 0.319s.

It was Jeff Drake who finished as the runner-up, as Watkins pushed Jason Brophy into the wall on the final straight, which meant both crossed the line in a rather dramatic fashion.

Joao Valverde took the final spot on the podium, with Brophy fourth, Zac Campbell fifth and Watkins in sixth.

Despite there being no caution periods during the first 100 laps, the yellow flags flew eight times in the second half.

One of those was for a crash involving real world Australian Supercars champion and two-time iRacing IndyCar Challenge race winner Scott McLaughlin. 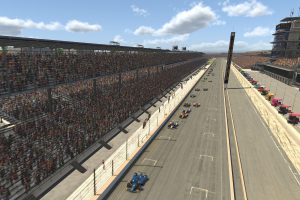 McLaughlin held the lead of the race briefly and with only 40 laps to go he was running in fifth and in contention for the win.

However two cars came together in front of him, with one of them spearing off and up the banking and into the side of McLaughlin’s car, taking him out of the race.

“I honestly never thought we had it in the bag,” Traino said after the race.

“We pitted off-sequence because Adam Blocker and Henry Bennett and the rest of those guys were trying to save fuel, so we didn’t want them to be in our draft and hopefully make it.

“So we just pitted off-sequence, ran as fast as we possibly could in clean air and McLaughlin went out in the end and threw everything up in the air once more.

“Honestly even with that one-lap shoot-out I didn’t think I had it.”