The team that won this year’s Indianapolis 500 and has established itself as a force at the Brickyard is very familiar with the limelight.

However, in the background, there’s an “undercover man” vital to the success, and who scored his first Indy 500 win in his team ownership role this year.

In the post-race press conference was global superstar talkshow host David Letterman, back in the limelight thanks to a new Netflix show that’s delivered interviews with Barack Obama, Kanye West and Lewis Hamilton to name a few.

“When we won it in 2004, honest to God, it was like I’d been hooked up to some powerful electric generator,” Letterman said of the team’s first 500 success when it was just owned by him and Bobby Rahal.

“I thought that I will never experience this again in my life. For me, just a goon, it was a life-changing experience.

“No here we are in 2020, I get to go through this again all because of the kindness and the generosity and hard work of Bobby and his team.”

Alongside Letterman was team co-owner Rahal, the three-time IndyCar champion and 1986 Indy 500 winner. A household name in motorsport for his achievements as a driver and team owner. He’s done and seen it all at every level and across multiple disciplines.

Absent was the third partner in the team equation, the “undercover man” Mike Lanigan. Despite his relative obscurity in comparison to his fellow team bosses, his story is all the more interesting and one The Race has a chance to tell having secured a rare interview with the man behind the scenes.

“Quite frankly, I like being the undercover man,” Lanigan tells The Race.

“I get to have my cake and eat it too, which is not being annoyed by people – most people don’t know who I am, which is fine with me!

“Bob and Dave are the guys that quite frankly have to be on the television and in the papers, and I’m fine with that.

“I like exactly where I’m at. Although [after the Indy 500 win] that’s changed in the last month or two…”

There’s no doubt the Indy 500 is where Lanigan’s heart is. Chicago born and raised, Lanigan was a fan of the area’s Bettenhausen family famous for its Brickyard antics, and by 1973 he’d attended his first Indy 500 and moved to Indiana to get closer to the action.

Based in Illinois, the Mi-Jack company was founded by the Lanigan family in 1954 in a south-suburb of Chicago and has grown into a building supply conglomerate known in the industry for rubber-gantry cranes.

As Lanigan helped to build the business his dream of becoming more involved in IndyCar grew, and in the 1990s he was able to sponsor a number of Indy 500 entries including Alessandro Zampedri in 1994 and 1995 (above).

It scored one podium with Laurent Redon at Fontana (below, #34) in its maiden Indy Racing League season before switching to Champ Car for 2003, where Conquest gave Justin Wilson his US break in 2004. That led to its most competitive performances of the era, though its first Champ Car podium came with Canadian teenager Andrew Ranger the following year.

But the Mi-Jack cars still hadn’t won. Still, if a lack of wins was your issue in Champ Car in this period, joining Newman/Haas was a good way to fix that.

Lanigan got involved with the team in 2007, when Sebastien Bourdais won his fourth title in a row with the squad and had rookie Graham Rahal – son of Bobby – as his team-mate. This helped lay the foundations for a future Lanigan tie-up with the Rahal family.

It also gave Lanigan more preparation for the future in dealing with celebrity co-owners. The late Paul Newman (below, centre) was a brilliant driver as well as legendary actor, and working with him would prove a pleasure for Lanigan as it did with Letterman later.

Asked about picking a career highlight, he says: “Probably the most important thing to me is that we have created a lot of great friends in the racing world.

“I feel honoured to have called David and Paul friends of mine, and without racing I never would have met them or worked with them. It’s a very small community in the racing community.

“The people in the racing community know who I am and I think they have the same respect for me as I have for them. It’s a situation that has created another life for me.

“I’ve been fortunate in my racing career, I was partners with Paul for a number of years and Paul and David both have the same passion for winning. As Bobby and I do, they have a full time career doing other things. But David’s from Indianapolis born and raised in Indianapolis, and he had the same passion that Bob and I have, in being competitive and winning.”

You can see Lanigan’s message: a business entrepreneur – albeit a very, very successful one – rubbing shoulders with one of the most famous actors and then one of the best known talkshow hosts of his generation, all while taking part in his favourite hobby. It’s a dream scenario.

With what had briefly been Newman/Haas/Lanigan in decline – it disbanded in 2013 – Lanigan joined Rahal Letterman in 2010. The team had won the 2004 Indy 500 with Buddy Rice, but by the end of that decade sponsorship issues meant it was only running part-seasons.

It went full-time again in 2012 amid a steady rebuilding phase, initially with Sato as its driver. He came close to winning Indy that year, crashing on the last lap when trying a move on leader Dario Franchitti.

Sato left to explore other teams, the prodigal son Graham returned for 2013 and bagged the outfit’s first win as RLLR at Fontana in 2015 (above) on the way to the team’s best championship result of the decade – fourth.

After signed Sato back from Andretti in 2018, he took third in the 2019 Indy 500 and then won this year’s race – ironically as the Mi-Jack sponsored third car of Spencer Pigot had a heavy crash to bring out a safety car that effectively finished the race and handed Sato a certain win.

While it was the team’s only win of the year, it’s one of the biggest events in motorsport and for someone who’s been to “46 or 47 500s in a row” and the last 28 as a team owner and/or sponsor, it was a mega achievement for Lanigan.

“Well, it’s like having your first child, it’s hard to describe frankly,” says Lanigan, asked about the emotion felt in winning the blue riband event.

“But, you anticipate it, you think you know how you would feel about it but once it happens, it actually takes a couple days to set in. I’ve been waiting so long, my brothers and I have been anticipating it for so many years and came close a number of times.

“It’s still with me, and I look forward to the next months because we’ll be the defending champions up until May.

“And we celebrated quite a bit. We had a big family party at my house then a couple of days later we had a big luncheon with all our sponsors in Chicago, and we also had the car and the trophy and Takuma at our factory to celebrate with our employees also.

“So we took full advantage of a unique situation [with the coronavirus, celebrating safely].” 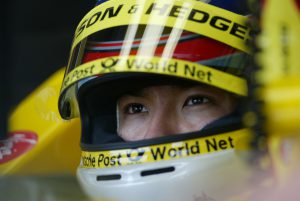 Why didn’t F1 work out for Sato?
Read more

Sato is a mercurial character and extremely unpredictable when it comes to other races, but at the 500, something clicks and in the last two years the ex-F1 driver looked incredibly quick at the Speedway.

Re-signing him – and a new engineer in the experienced Matthew Greasley from Carlin – alongside Graham Rahal was the first task for 2021 to ensure the team continues to trend upwards.

Since 2009 RLLR has been BMW affiliated in the top American sportscar series – now IMSA – and in 2024 the two programmes will come under the same roof in a brand new $20million factory in Zionsville, Indiana, creating over 70 new jobs.

For Lanigan the people are the important pieces of the puzzle, and the team’s steady growth – not too fast – will be the key to its assured future success.

“The more success you get in this business, the more you want,” Lanigan adds.

“And there’s some big teams that are involved with IndyCar and a lot of great people that we compete against and of course you get some of the best drivers in the world that can win almost every Sunday. So that feeling and motivation will never stop.

“It takes a while to really get your foot dug in on this type of business because you need all of the right pieces because it is a team effort. You could have the greatest driver in the world, if you don’t have the engineers and the mechanics and the pit crew all going in the same direction, it never works.

“And over the years we’ve continued to improve ourselves with the right people in the right slots. And it’s all been coming together the last couple of years. And we’re going to continue to improve.

“One of the things is the new facility that we’re building – it’s a new hundred thousand square foot facility, state of the art. And we’re going to move our IMSA team from Ohio to Zionsville where the plant is going to be.

There’s work to do to challenge those top teams Lanigan mentions over the course of a whole season. But RLLR’s recent success has come about from steady growth, not biting off more than it can chew and improving elements of the team year on year.

That’s not always enough when you’re in a championship as competitive as IndyCar. But a love affair that has lasted over 50 years shows no sign of waning for Lanigan. His motivation to get a second, third, fourth Indy 500 win is as high as ever.

He may be the “undercover man” in the background, but that’s where he gets the crucial work done.