History will be made at this Sunday’s Indianapolis 500, as a female-dominated pit crew trained in just four months will work on Simona De Silvestro’s Paretta Autosport entry.

Since January when the Penske-affiliated team – supported by IndyCar and the Indianapolis Motor Speedway’s ‘Race for Equality & Change’ initiative – was launched, the squad have been up as early as 0330hrs to arrive at Penske by 5am for pitstop practice.

Under the guidance of ace pitstop coach Sean Rinaman – who trains Penske’s series leading pit crews – an all-female group in training lowered stationary 17 second stops down to a 5.5 second average with a moving car.

IndyCar rules only allow seven people in an over-the-wall pit crew to service the car in stops, and of those training to make the team, four have made it through to Sunday’s race line-up.

Madison Conrad – left rear
Former short oval racer who started in Roush Fenway NASCAR team in the parts department, is a marketing specialist and has assisted with tear-down and post-race engine inspection

Caitlyn Brown – left front
Assembly team member of Team Penske since 2019, one of many graduates of the NASCAR technical institute

You can read full bios on the team members here

The team was founded with the intention of inspiring women and young girls to compete and progress in a male-dominated industry like motorsport, and the pit crew is just one area where Paretta has excelled.

Four may seem like a small number when you’re used to seeing an Formula 1 pit crew at work, but with seven the maximum in IndyCar and Paretta has assembled a line-up that’s just over 50% female – and not just that, they’re women who didn’t have pit crew backgrounds and some of whom haven’t even come from a history in motorsport.

This is important, because if team owner Beth Paretta wanted, she could have gone out and poached enough women competitors from across the motorsport world to have an all-female team. There’s two women going over the wall in other teams at the 500 this year and there are myriad engineers and plenty of other roles out there who would be capable.

But that isn’t the intention of this team. Yes, professionals have been gathered from around motorsport, but if the aim of this team were to be put all the females in motorsport in one place, where would the new blood coming into the sport come from? 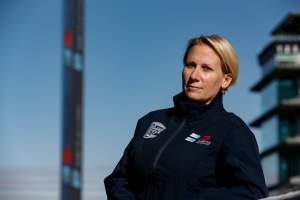 Plus, regardless of gender, a forced all-women team stuck together in four months would lack the depth of advice, experience and learning that working with men who have long histories in motorsport can provide, and could be essential to those entering with no motorsport background.

The way the team is currently set up, it provides the role of showing women and young girls that this is possible, that women can compete on an even playing field in motorsport, while allowing fresh faces to come in and learn the ropes at a very high level. It’s hopefully a much-needed conveyor belt introducing new women into motorsport which is much needed, and could eventually lead to an all-women team which has all the tools it needs in the future.

No doubt the pitcrew has caused plenty of talking in the paddock too, and The Race’s Podcast host JR Hildebrand joked that he wanted his AJ Foyt team to sign some of the female pit crew members.

“If you’re at Indianapolis and you’re a dad with a young daughter, walk by their pit area and make sure you get a good look at those ladies jumping over the wall because they look on-point,” said Hildebrand.

“You walk by them in the pitlane and it puts a smile on my face.

“Those ladies are killing it here and it’s really cool to see.

“They’re here because they think it’s badass and they’re good at it. It’s cool to see that attitude coming through. I’ve been sat here, like, I want some of our team to hire some of those [women]!”

There are many more fantastic women working behind the scenes in the Paretta team too. Lauren Sullivan – nicknamed Sassy – is the team’s performance engineer, her day job is in Penske’s NASCAR windtunnel regime so coming to Indy – especially this year with a new aero package – is a dream come true. Many of the marketing, PR and events personnel are female and mechanics too, like Andra Buzatu who is adapting to civilian life after serving in the military through motorsport.

Linda Conti is one of the most experienced people in the team and she’s another person who will have a key role as De Silvestro’s spotter. She’s a bit of a legend in IndyCar and has worked in just about every role, from the mechanical side to becoming the first female team manager in the Indy 500’s history as part of co-owning a team with her husband Dave Conti. 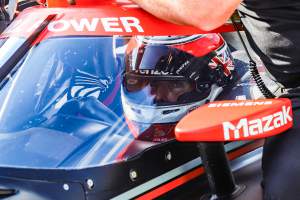 The great news for Conti and the team is that it looks like the squad will be competing again at a yet to be disclosed race later this year depending on De Silvestro’s Porsche commitments. So the three females who missed out on the pitcrew have another few months to prepare to make the squad again. Seeing what they have achieved in this short space of time, the sky is the limit.

If you’d suggested to me that you could train people to do sub five-second stops in less than four months for the Indy 500 – male or female – I’d have said it was bordering on impossible. Happily, I’ve been proven wrong four times over.

On track the Penske-affiliated team has had a rollercoaster month of May with strong practice pace – which De Silvestro is confident can help her move forwards from 33nd on the grid – but Penske as a team struggled massively when the boost was turned up in qualifying. Will Power – one of IndyCar’s best ever qualifiers and who hasn’t started out of the top 10 at the Indy 500 since 2008 – was in bump day qualifying with De Silvestro at the back of the pack.

A rookie of the year in 2010, De Silvestro is by every means the right person to lead this team forwards though, and is expected to be a strong threat in the race.

She’ll need a strong pitcrew like every team does in the Indy 500, and it will be the ultimate test for its latest stars.

May 27 : Beast: The Indy 500 engine that shocked the world, with Al Unser Jr
Thank you for your feedback!

How the biggest move of the IndyCar driver market happened

Romain Grosjean joining Andretti Autosport is the most attention-grabbing IndyCar driver move for 2022, but Meyer Shank getting Simon Pagenaud might be the biggest coup