Team Penske’s Scott McLaughlin bagged his second IndyCar pole position of the 2022 season with a brilliant late lap in Nashville to beat Andretti Autosport driver Romain Grosjean, as many of the title challengers hit problems earlier on.

IndyCar’s habit of having red flags totally shake up the qualifying order on street courses – an especially bad problem this season – struck again after a rain delay before the session began for thunderstorms washed away any surface rubber and made the track slippery initially.

With two red flags in the first 10 minute group, some drivers didn’t get a flying lap on the soft tyre. Last year’s pole winner Colton Herta (starting 21st) crashed late in the group.

Here’s another look at what happened to Colton Herta.

Herta says it “was a little too ambitious. I just overdid it.” #INDYCAR pic.twitter.com/rb5pEaSCUN

That ruined opportunities for Meyer Shank’s Simon Pagenaud (starting 13th), Arrow McLaren SP’s Felix Rosenqvist (starting 15th) who had been in the top six in both practices, and Herta’s Andretti team-mate Alexander Rossi (starting 17th) who all ran out of time to improve.

“A lot of guys don’t belong up there up front. It’s very frustrating to see these rules not change.”@simonpagenaud could only put one lap in before the red flag came out for Colton Herta’s crash to end the qualifying session. #INDYCAR

Dalton Kellett graduated to Q2 from this group for AJ Foyt Racing for the first time in his career, but the time that put him sixth in the heavily interrupted first group was actually slower than the time that put Jimmie Johnson last by 2.8 seconds in the second group.

Group two ran much smoother. The big hitters missing out included Scott Dixon, who will start 14th, having started on the front row last year. The best points scorer on street circuits this year missed out on graduating by 0.0796s.

Championship contender and last year’s winner Marcus Ericsson, Dixon’s Ganassi team-mate, starts 18th, coincidentally where he won from last year. He faces an uphill task with points leader Will Power qualifying inside the top 10 and Ericsson himself struggling with lacking the feeling he wants from the car. 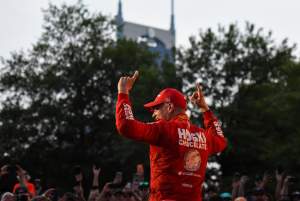 In an epic Q2 of 12 cars that gets narrowed down to the final six-car fight for pole, Alex Palou, McLaughlin, Grosjean, Christian Lundgaard, Josef Newgarden and Pato O’Ward made it through to the Fast Six.

The controversy here centred around Power, who lost his best lap for going into a run off and affecting a competitor’s lap which dropped him from graduating to the Fast Six to an eighth place start as he chases tying Mario Andretti’s series pole record.

In the Fast Six, hometown hero Newgarden caused intrigue by running a fresh set of hard tyres instead of the used softs his rivals used, but ultimately the strategy backfired as his rivals were able to improve.

Lundgaard – who locked up on his first flier – and Grosjean jumped to the top, but McLaughlin delivered a top notch lap at the last on the twisty circuit, to go top by 0.1420.

Grosjean qualifies inside the top five for the first time with Andretti in what has been a disappointing season where he lies 14th in the championship, but is in a good position for the race and avenged the misfortune and mistakes of his team-mates.

Lundgaard gets his best IndyCar start and his second consecutive Fast Six appearance for Rahal Letterman Lanigan, ahead of Palou, O’Ward and Newgarden. 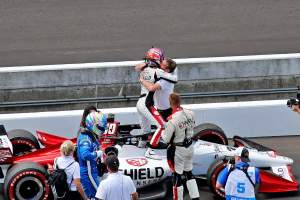 David Malukas was the first driver to miss out on the Fast Six as he continues his strong form as a rookie for Dale Coyne Racing with HMD, 0.0243s behind O’Ward.

Behind Power, Graham Rahal takes ninth, with Rinus VeeKay – fresh off taking himself out of the driver market by signing a new Ed Carpenter Racing deal this week – rounding out the top 10.

Jack Harvey took 11th for Rahal Letterman Lanigan ahead of a best start for Kellett, bettering his 14th – also on a street circuit – at St Petersburg earlier this season.