IndyCar season opener postponed for second year in a row

The Grand Prix of St Petersburg which was set to open the 2021 IndyCar Series season has been postponed for the second year in a row due to the coronavirus pandemic.

The Florida event will move back to an April 25 slot having originally been due to have taken place on March 7.

It means Barber Motorsports Park in Alabama is now the de-facto season opener on April 11, while the event which was due to follow it, Long Beach, has already been delayed as the first pandemic-induced change on the 2021 calendar. 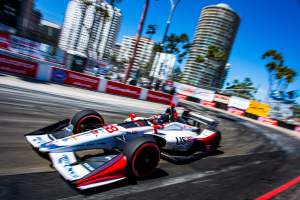 “It’s not surprising that an event of this magnitude, scheduled for the first week of March, is still subject to the implications of the pandemic,” Penske Entertainment Corporation president and CEO Mark Miles said.

“We’re delighted we were able to work with Mayor Rick Kriseman’s administration and Green Savoree Racing Promotions to find a more suitable date, which helps consolidate the beginning of our schedule and allows us to stay on NBC network television.”

This is a great decision by @IndyCar. Plus it gives me another month to get ready. https://t.co/n6GjkEvD09

“We are grateful to keep the Firestone Grand Prix of St. Petersburg in the springtime window and also maintain the live national broadcast coverage of the race on NBC.”

St Pete actually kicked off its 2020 event in March last year with support series action on the weekend it was due to host IndyCar, but made the late decision to cancel.

The season eventually got underway at Texas in June and St Petersburg successfully went ahead in October as the season finale. Josef Newgarden won the race while Scott Dixon won the title.

The first change in the 2021 calendar, Long Beach, means that event has become the season finale on September 26 in a three-race run of events on the west coast.

As well as the IndyCar Series, its feeder series Indy Lights will make the same move and start its season at Barber in April also.

The spring training testing event for all three Road to Indy series – Indy Lights, Indy Pro 2000 and USF2000 – will move from its February 22-24 date to “late March/early April” at Homestead-Miami, series organisers have confirmed.

A specific date is yet to be announced.