Spectators will be allowed to attend this year’s Indianapolis 500, with the venue announcing it will be open to 50% of its capacity amid the coronavirus pandemic.

IndyCar has had to reschedule its calendar on multiple occasions through the Covid-19 outbreak. The series’ blue-riband event, the Indy 500, was forced to move from its usual date at the end of May to August 23, with qualifying the weekend before.

Roger Penske – new owner of Indianapolis and IndyCar – said it would be unlikely the event would run without fans, and on Friday the speedway’s president Doug Boles confirmed it would be able to do so with limited attendance “to approximately 50% of venue capacity” and “additional carefully considered health and safety measures”. 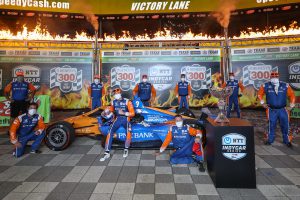 The rescheduled IndyCar season began at Texas earlier this month – the race won by Chip Ganassi Racing’s Scott Dixon – and returns at Indianapolis on its road course alongside NASCAR on the Independence Day weekend, IndyCar racing on July 4.

A number of venues including Road America and Iowa are running double-headers to supplement the calendar after rounds at Long Beach, Detroit, Toronto, Richmond, Barber and Austin were all cancelled.

Road America follows the Indianapolis road course event and will allow fans as confirmed by IndyCar on Thursday, while Iowa – the next event – is also allowing a number of spectators.

Indianapolis has promised more details on how the event will take shape in “coming weeks”.