Romain Grosjean has apologised for his Turn 1 mistake in the Portland IndyCar race, having been criticised for his role in a first-corner pile-up.

It was an incident packed Turn 1 on the first lap as ahead the leading four cars went off-track – triggered by Felix Rosenqvist clipping Scott Dixon, also forcing Alex Palou and Alexander Rossi in to the run-off.

The green flag is out at @Portland, but the tricky Turn 1 strikes again.@PatricioOWard is your leader.

It caused a concertina effect, but Grosjean arrived at Turn 1 way too quickly and he hit Sebastien Bourdais lightly first then careered into James Hinchcliffe who was on the outside.

Grosjean had only been that far back after a hefty penalty for blocking Scott McLaughlin in qualifying. He consequently went from just missing out on graduating to the second round of qualifying in the top 12 by 0.089s and starting 13th, to losing his two best laps and falling to 21st.

“Portland was definitely not the weekend that we were hoping for,” said Grosjean.

“Qualifying was not easy and I made a mistake going into Turn 1 at the start.

“I’m sorry to everyone that was involved.”

Grosjean rejoined 15 laps down after repairs, calling the Dale Coyne team’s effort there “an amazing job”, and was classified 21st, but also set the race’s fastest lap.

“It’s too bad because we had really good pace, but we lost too much time at the beginning,” he said.

“Hopefully we do better next week at Laguna Seca.”

Hinchcliffe is on a string of poor results where bad luck has also intervened, and he looks set to lose his Andretti seat at the end of the season. 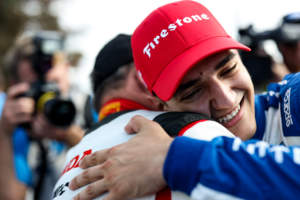 By a turn of fate he had taken over the 13th starting spot Grosjean should have had but his race was over after the contact.

“I got into Turn 1 pretty clean, locked up a little bit and managed to avoid Bourdais, but then as I was trying to make the corner I absolutely got cleaned out from Grosjean.

“The rate at which he hit, he wasn’t going to make the corner if there weren’t any cars there, so I’m not sure what he was thinking.

“I’m sure he is just as bummed. It sucks to be out in the first corner like that.

“I just can’t believe this happened for the third year in a row here at Portland and I haven’t made it past the first two corners. It’s devastating.

“The car was actually pretty well-suited for these conditions. I think we were actually going to be in a strong place and had some good strategy options with the distance of the race.

Elsewhere in the melee, Oliver Askew – making his debut with Rahal Letterman Lanigan – carried too much speed in and spun. He likely would have taken third or fourth on the restart had he kept it on the road.

He clipped the rear of McLaughlin’s car and then flicked left into Indianapolis 500 winner Helio Castroneves, who in turn hit Will Power. While the two Penske drivers continued, Castroneves also had a long stop for repairs and finished 19 laps down in 23rd.

“I saw somebody coming in like a torpedo at the start and the experienced guys started backing off, I don’t know who it was but he came in and started hitting everybody,” said Castroneves, who is preparing for a full-time IndyCar season in 2022 for the first time in four years.

“I guess the guy from the right side got hit, he hit me, I hit somebody on the left and bent the suspension.

“Shortlived but good news is we were able to get back out on track to make the most of the race. The car was pretty great around Portland.

“We used the session to keep it going, stick it out, and keep working on those little bugs. We tried a lot of things when we did the pitstop. Those things are preparation for us.

“It’s not what we wanted but we have to take it as it comes and hopefully, Laguna will be a better performance.”

Ilott suffered an electrical issue that forced him to grind to a halt in a disappointing end to Juncos Hollinger’s return to IndyCar and its first road course event since 2018.

The package looked set to at least be able to fight for a top 15 which is no mean feat on debut.

Ilott had schedule clashes but has worked those out and will contest the last two races for the team as he evaluates a possible switch to the series full-time next year.