Romain Grosjean says it could have been a “great story” if his former Formula 1 boss Gene Haas had sponsored him in IndyCar, but called Haas’s decision to withdraw proposed backing “fully understandable”.

Grosjean had planned to race full-time in the IndyCar Series this year with Dale Coyne Racing before his huge F1 crash in Bahrain led year led him to reconsider the oval rounds.

He eventually decided to just contest the road and street courses with Coyne.

Haas had expressed an interest in sponsoring Grosjean’s IndyCar programme, but last month he revealed to Racer that he changed his mind after Grosjean’s Bahrain accident. 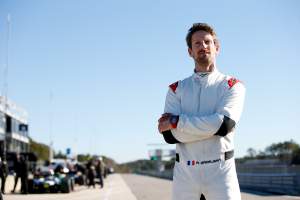 “He has a wife and three kids, and I just told him I couldn’t see giving him money to go out and kill himself,” Haas said.

But he acknowledged the talks had ended and suggested there was no ill feeling.

“We definitely had discussions before and after the crash with Haas to sponsor the project,” said Grosjean, who had raced for Haas in F1 since the team’s debut in 2016 before he and Kevin Magnussen were replaced for the 2021 season by an all new line-up of Nikita Mazepin and Mick Schumacher.

“It felt like it could be a great story, racing for Haas in Formula 1 since the beginning, then carrying on and bringing the colour to IndyCar.

“I guess they had their reason and their choice. Fully understandable.”

Earlier in IndyCar’s media day it was announced that Pietro Fittipaldi – who stood in Grosjean at Haas in the remaining two F1 races after his accident last year – will return to Dale Coyne Racing to share Grosjean’s car, racing it at the oval events.