Double Australian Supercars champion Scott McLaughlin scored his first IndyCar win before making his real-life series debut, as the Penske driver won the second round of the IndyCar iRacing Challenge.

McLaughlin, who was due to make his IndyCar racing debut at the Indianapolis road course race before it was postponed from May to July, got up at 2am in his native New Zealand to take part in the Barber Motorsports Park race.

He was one of the only drivers to pit early on lap 12 of 45 before the mandatory caution period on lap 15. 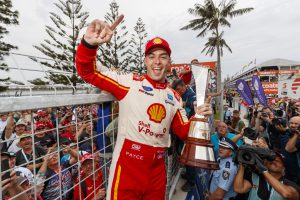 The time is right for McLaughlin’s IndyCar leap
Read more

After most drivers pitted around lap 25, McLaughlin cycled to the lead, but he would surely run out of fuel.

However the Kiwi was given a huge boost when the leading contenders collided.

Like round one at Watkins Glen, Sage Karam – the eventual winner of that race – Felix Rosenqvist and Will Power were the stars of the show at the latest round, Karam rendering the competition caution irrelevant as he built the same amount of lead after it as he had before it.

But he complained of traffic on his in-lap, which meant he and Rosenqvist got close on track after their respective stops.

Rosenqvist appeared to carry too much speed into the Turn 11 and 12 complex, going slightly offline, opening the door for Karam.

But as Rosenqvist came back onto the racing line, Karam clipped his rear right tyre and spun the pair out.

Karam had a pitlane speeding penalty to compound his woe and dropped out of the race, while a spin shortly after the Karam contact rendered Rosenqvist’s chances of victory over.

Shortly after this collision, McLaughlin put the hammer down in clean air and extended a gap at the front of the field – essential to his victory strategy as many caught traffic – before pitting and returning to third. 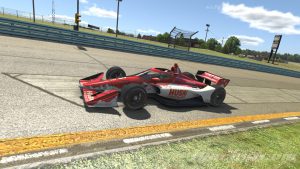 He made short work of scything the lead margin apart until he passed leader Scott Speed with six laps remaining.

McLaughlin looked clear, but his Penske team-mate Power closed in during the last five laps.

On the final tour, Power loomed in his countryman’s mirrors and McLaughlin locked up into the final corner of the final tour. But he just held on to his margin to secure victory ahead of his team-mate.

Ex-Toro Rosso Formula 1 driver Speed had been in contention for a podium last week at Watkins Glen but spun while fighting Power. He found redemption by rounding out the top three with an assured if unorthodox strategy to make it to the end.

Alex Palou qualified fourth and spent most of the race outside of the top quartet but returned late on as many drivers ran out of or had to save fuel depending on their individual race strategy, in the same way they would in real life.

Reigning Indy 500 winner Simon Pagenaud made it three Penske cars in the top five, ahead of a recovering Rosenqvist who was left to rue his incident with Karam.

Colton Herta took seventh, ahead of a storybook eighth for Robert Wickens who pitted at the same time as McLaughlin late on.

Wickens hasn’t competed since a huge crash at Pocono in 2018 put his racing career on hold. A mere day after his sim set-up arrived, complete with an unfamiliar hand-control set-up, the result was a phenomenal comeback befitting an inspirational human being.

"It felt like the real thing."@RobertWickens scored a top-10 finish in his virtual return to @IndyCar racing. We caught up with him after the @iRacing #INDYCARChallenge. pic.twitter.com/OOhECTHvQw

Reigning IndyCar champion Josef Newgarden’s iRacing baptism of fire continued – though he still ensured the Team Penske drivers were all in the top nine – ahead of a brilliant comeback drive from near the back of the grid for Dale Coyne’s Santino Ferrucci.

Rosenqvist’s Chip Ganassi Racing team-mate Scott Dixon had missed the Watkins Glen opener, but the five-time series champion was back for Barber and ran in the top 10 for most of the race before he slipped to 16th after a spin.

The next round of the series will be a ‘drivers’ choice’ track next Saturday, with more details on how that will be decided to come later in the week.

A champion will not be named at the end of the series and IndyCar is set to donate money to charity.