The race featured nine cautions covering 33 of its 80 laps, was twice red-flagged and took nearly four hours from the start of pre-race ceremonies to the chequered flag.

REPLAY: The incident involving multiple drivers that brought out the red flag in Nashville.

After four early cautions and a red flag for shunts, which polesitter Colton Herta comfortably led through, Rinus VeeKay changed the shape of the race when he crashed at Turn 1 on lap 31 of 80.

Herta needed to pit and risked being undercut by a number of earlier pit stoppers from across those early cautions.

However, as Herta pitted the pace car slowed to pick up the new leader as the rest of the initial top six pitted, and then the pace car had to slow again for VeeKay’s crash at Turn 1.

That meant the pace car went so slow that Herta could pit and come out in fourth place.

Ericsson took the lead – despite leaping over the back of Sebastien Bourdais’s car on lap four, for which he earned a penalty – but the fuel he took on after that penalty and more cautions allowed him to jump into a prime position at the head of the field in a move that reflected the topsy turvy order of the race.

That incident between Ericsson and Bourdais just before the restart 😮pic.twitter.com/dlcpANvmmx

When the race resumed Herta and his Andretti team-mate Alexander Rossi made quick work of team-mates James Hinchcliffe and Ryan Hunter-Reay on consecutive laps with Herta pressuring new leader Ericsson before another caution.

Ericsson and Rossi pitted hoping for another caution to be able make the end of the race with no more stops, while Herta and Romain Grosjean stayed out.

A puddle of running water forming at Turn 3 extended the caution, playing into the advantage of those who pitted during the yellow and the race didn’t restart until lap 50/80.

On the restart, Arrow McLaren SP’s Patricio O’Ward locked up and hit Rossi at Turn 4, taking second place in the championship O’Ward out of contention via a penalty for unavoidable contact, and ruined the strategies of Herta and Grosjean in the process by triggering another yellow just as they needed to try to make a break. 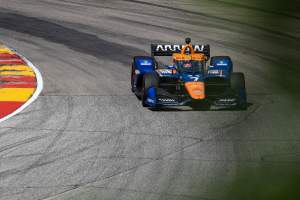 Herta pitted while Grosjean stayed out, but then another caution on lap 55 for the spinning Cody Ware sent Grosjean into the pits, cycling Ericsson back to the lead with Herta in fifth.

Following the restart, Herta passed Hunter-Reay at Turn 8 and Hinchcliffe and Dixon at Turn 9 in quick succession to then battle Ericsson for the lead.

Ericsson had better straightline speed and more push to pass, which made him more difficult to pass than Herta’s other rivals.

With 12 laps to go Herta finally appeared to have a run on Ericsson and dived at Turn 9 following the bridge, but couldn’t make the move and almost hit the wall on the exit. 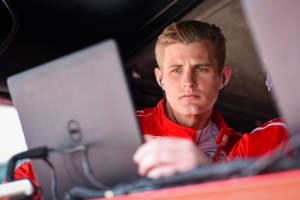 Is Ericsson unfairly ‘under the radar’ in IndyCar?
Read more

As he closed back in towards Ericsson, with five laps to go Herta crashed into the outside of the wall at that Turn 9 corner. Herta appeared to have hurt his thumb in the incident but was cleared in the medical centre afterwards.

Another red flag was called to ensure the race could finish under green, with a final two-lap sprint to decide it.

Ericsson kept Dixon at arm’s length to claim one of the most unusual wins in recent IndyCar memory, and his second of the year.

Behind Dixon, Hinchcliffe held on for a podium ahead of Andretti team-mate Hunter-Reay, both of whom are fighting for their seats next year. They scored their best results of the season from 10th and 14th on the grid respectively.

REPLAY: Incident involving @smclaughlin93 and @Dalton_Kellett that brought out the yellow flag earlier in Nashville.

Graham Rahal was fifth, ahead of Ed Jones – who caused an early caution by punting Scott McLaughlin off at Turn 4 and took a stop-go like Ericsson for it – for his best result of the year.

McLaughlin was also pushed off again later on by his Penske team-mate Will Power, in Power’s second intra-team collision of the race after earlier helping Simon Pagenaud into the wall in a clash that caused a traffic jam and red flag.

Palou pitted before VeeKay’s crash early in the race and that pinned him way down the order, but the points leader never panicked and picked off cars when it was possible and did the rest of his moving with strategy under cautions.

Jones and Palou jumped Felix Rosenqvist on the penultimate lap after Jones opened the door at Turn 9, but eighth was still Rosenqvist’s best result of his Arrow McLaren SP career so far.

Helio Castroneves – in his first race after winning a fourth Indianapolis 500 with Meyer Shank Racing – took ninth, ahead of Josef Newgarden who did the whole race with bent steering after being involved in two accidents, one with Rahal causing his damage.