The revelation that the scholarship prize fund for winning Indy Lights has been more than halved has far-reaching consequences – and not just for runaway 2022 champion Linus Lundqvist and his hopes of graduating to IndyCar.

It’s also an unwelcome distraction at a time where Indy Lights, which from 2022 has been promoted by the Penske Corporation after it succeeded Andersen Promotions, is next year expecting to have its biggest full-time grid for well over a decade. 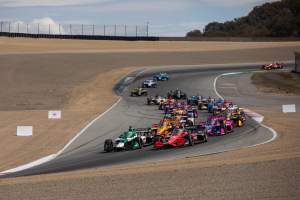 The Race’s sources and IndyCar itself have confirmed reports that the prize fund for the championship winner has dropped from $1.2million to $500,000 for 2022, while the guarantees of an entry for the Indianapolis 500 and two other races – all of which was arranged by IndyCar – and IndyCar test for the top-three finishers are gone, too.

The outstanding $700,000-plus – previously provided by Andersen, though a substantial amount of that was footed by tyre supplier Cooper Tires, which will be replaced in Indy Lights by Firestone next year – has not disappeared. But instead, this is being distributed in the form of payments to the first four finishers at each Indy Lights race.

That would immediately reduce the pooled amount available to the series winner, but there’s a bigger problem: the drivers are unlikely to see any of that money. Directly, at least. 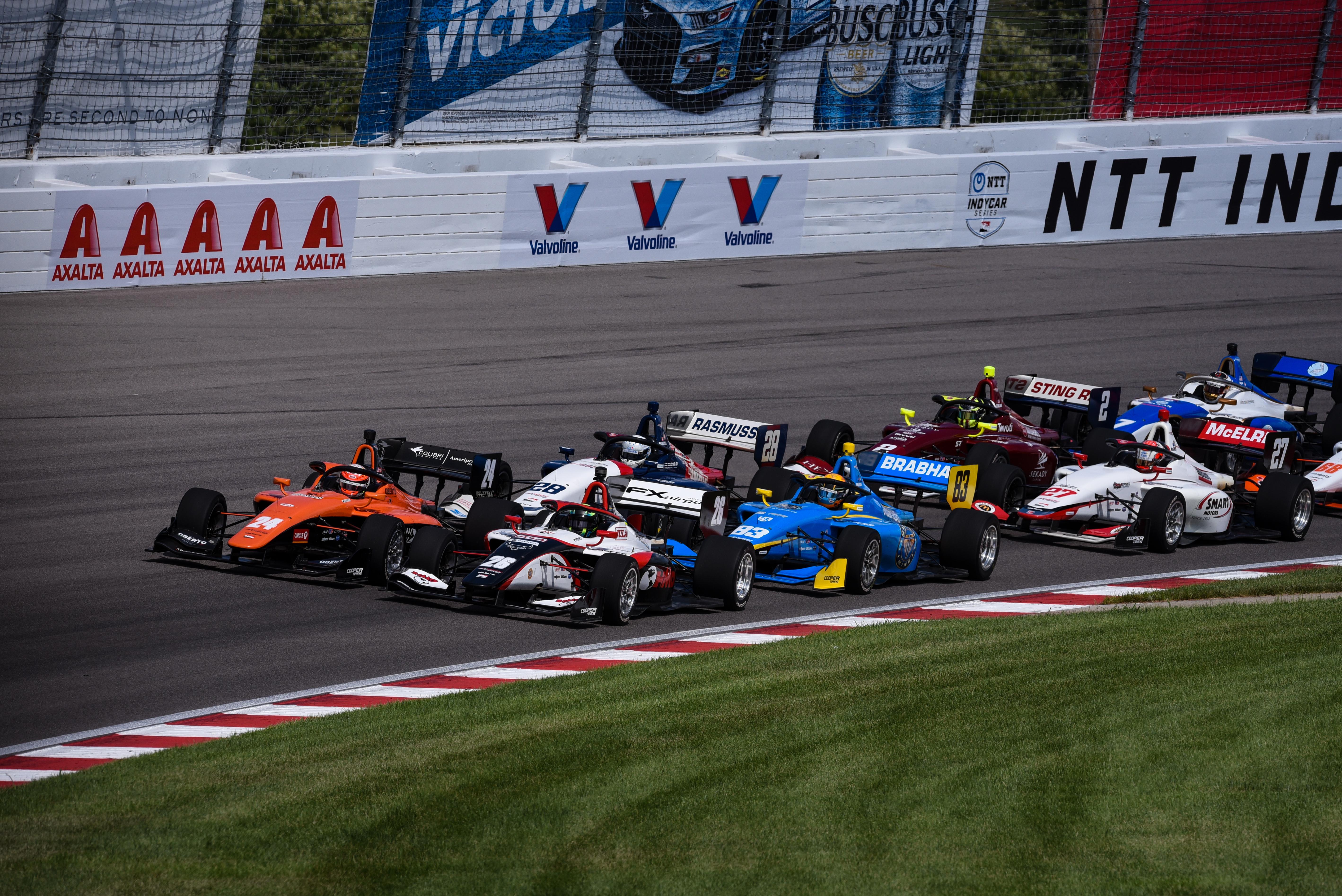 Under this distribution system, that money goes to the teams. If the drivers do benefit from it, it’s much more likely that an anticipated return on prize money for top-four results will have been taken off their budget requirement for the season (though this is not always the case).

For Lundqvist, who without the $600,000 and Honda-backed scholarship he earned for winning the Formula Regional Americas series in 2020 would have struggled to raise the budget for his first Indy Lights campaign last year, such a reduction would have been of short-term benefit. But it’s made the search for an IndyCar seat, which last month seemed close to his grasp, a much, much tougher prospect.

Graduating with the Dale Coyne with HMD squad that ran him to this year’s title still seems his best bet, and the Lundqvist camp remains upbeat and insists it has options for next year – with IndyCar teams still interested in finding a seat for another Swede on the 2023 grid. It’s not too late for the series to step in to help him, either.

But the bottom line is the budget needs to be found, and that task is an unenviable one. Not only is more than half of the previous fund and the guarantee of three entries gone, but so too is the tailor-made package of such negotiations by IndyCar to help Lundqvist’s team out. It’s his camp having to scout the market, which is a break from tradition for the Indy Lights champion even though it’s the done thing up and down the pitlane. 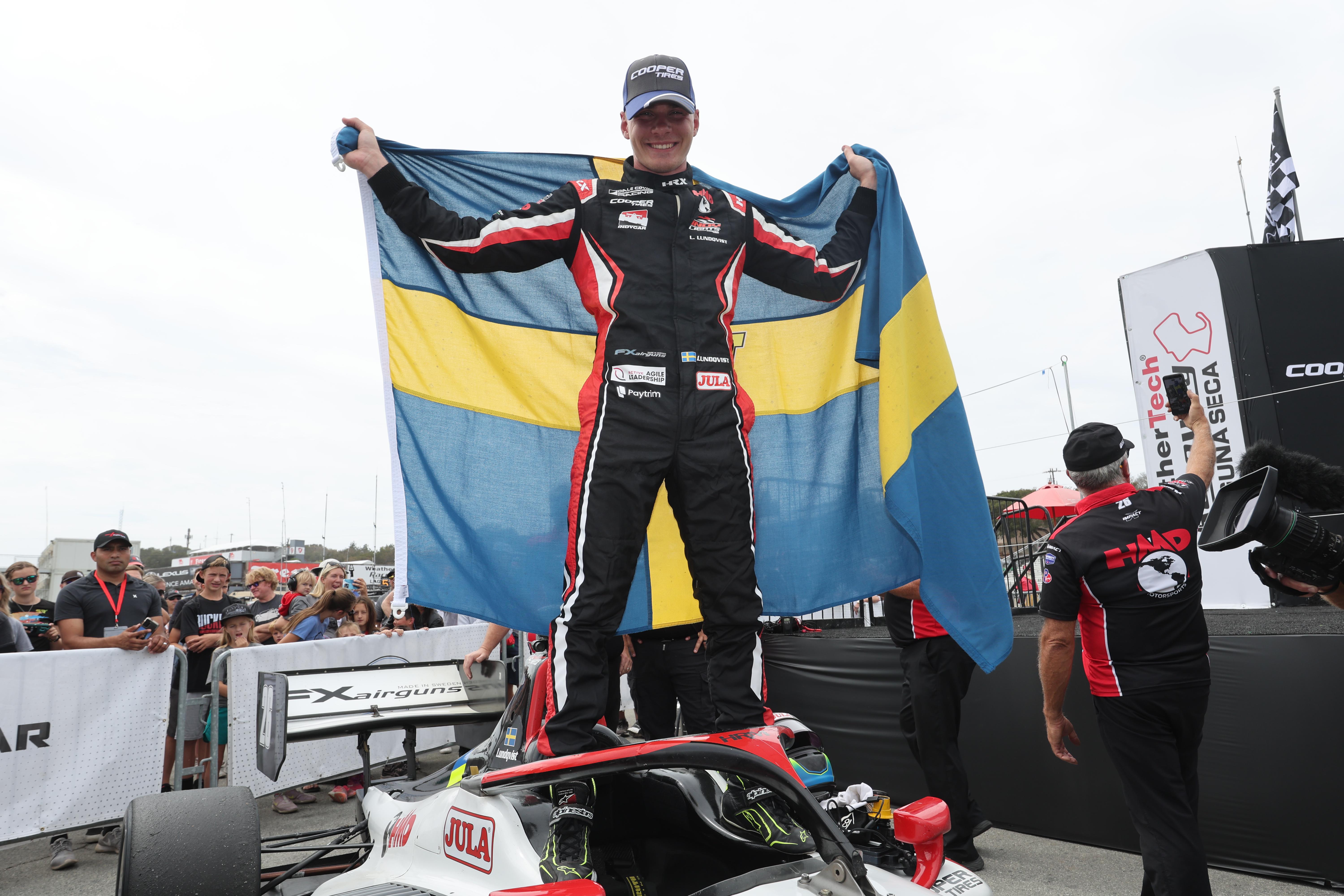 It’s not difficult to see how much harder that makes things; the $500,000 is just about enough to cover one race entry, but even if Lundqvist got that under the proviso that a good showing would earn him another outing, that’s an extra (unnecessary) headache for a driver that’s scrambling just to get a third of the chance he might previously have expected. It’s a small consideration, but a not insignificant one – and represents the vision of an underfunded driver living the American dream in its crumbled reality. 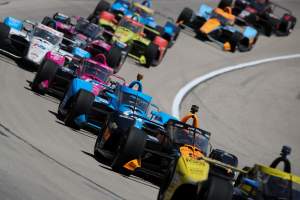 What seems most perverse about the situation is the way it’s been communicated – or not communicated, in this case.

The suggestion is discussions about the prize fund, while always well-mannered and polite, have been led by driver and team and not the promoter. This also includes months of indecision and non-commitment, while details such as engine and tyre deals were being worked on, though it’s claimed that the amount promised all that time would be at least the same as the $1.2m Kyle Kirkwood scooped for winning the Lights title in 2021.

And even now there’s been no announcement of the final, lower amount (a figure that’s said to have come as a surprise to IndyCar teams, too), although IndyCar has confirmed the distribution. It’s understood Lundqvist had to ask that question after the season before it was finally confirmed to him that it would only be $500,000. 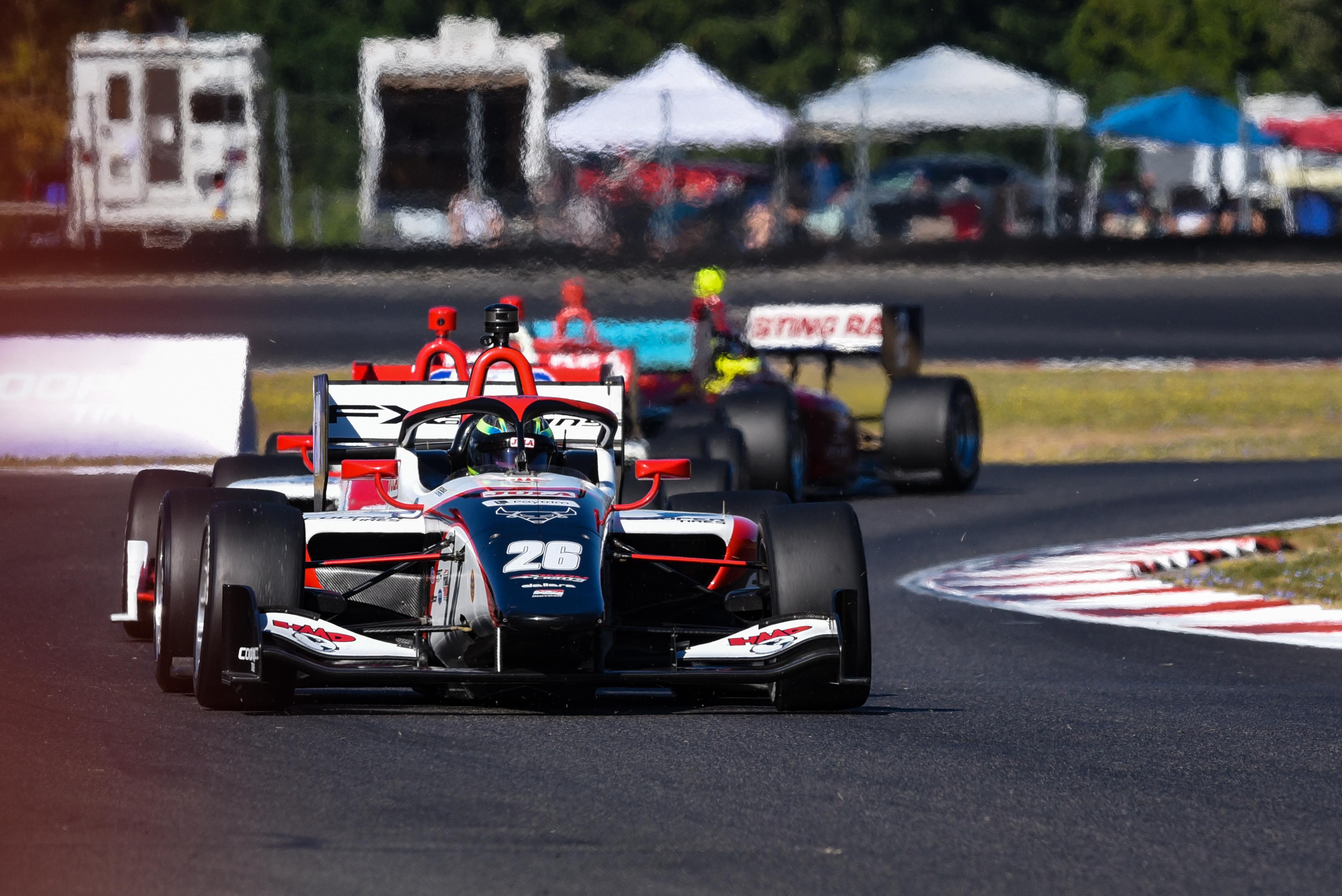 What does it mean for the Road to Indy ladder? Image-wise, it’s not great for the primary feeder series to be awarding its winner less than the $600,000-plus Louis Foster netted for winning the Indy Pro 2000 series, which remains under the watch of Andersen Promotions. Foster’s prize will go towards his seat at Andretti in Indy Lights next year. 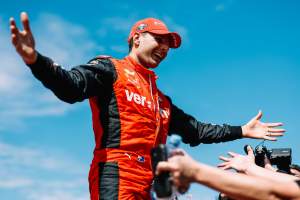 Put simply, it’s a situation that needs IndyCar’s authoritative voice on it, and quickly. The series says it continues to monitor the situation and will evaluate it over the off-season, but teams and drivers need to know what they’re signing up to for 2023 soon; a repeat of committing under one set of conditions, only for another to be in place, is something no one needs.

Indy Lights is an under-appreciated gem in the junior racing landscape; it’s the main player on the the undercard for America’s premier single-seater series, the level of the teams and technical package the Dallara IL-15 offers is high, and it’s finally tackled the problem of small grids (next year’s field is set to comprise 19 cars, something the redistribution of funds towards teams has undoubtedly aided). It’s those factors that attracted the likes of Lundqvist in the first place.

But look at his case, and for an underfunded driver it’s clear the biggest draw was the prize package that had previously been available. If that’s no longer there in the same form it was, it begs the question whether that incentive is worthwhile – especially if the series below is rewarding its champion more – or if it’s enough for those close to agreeing deals for 2023 to reverse their commitments. 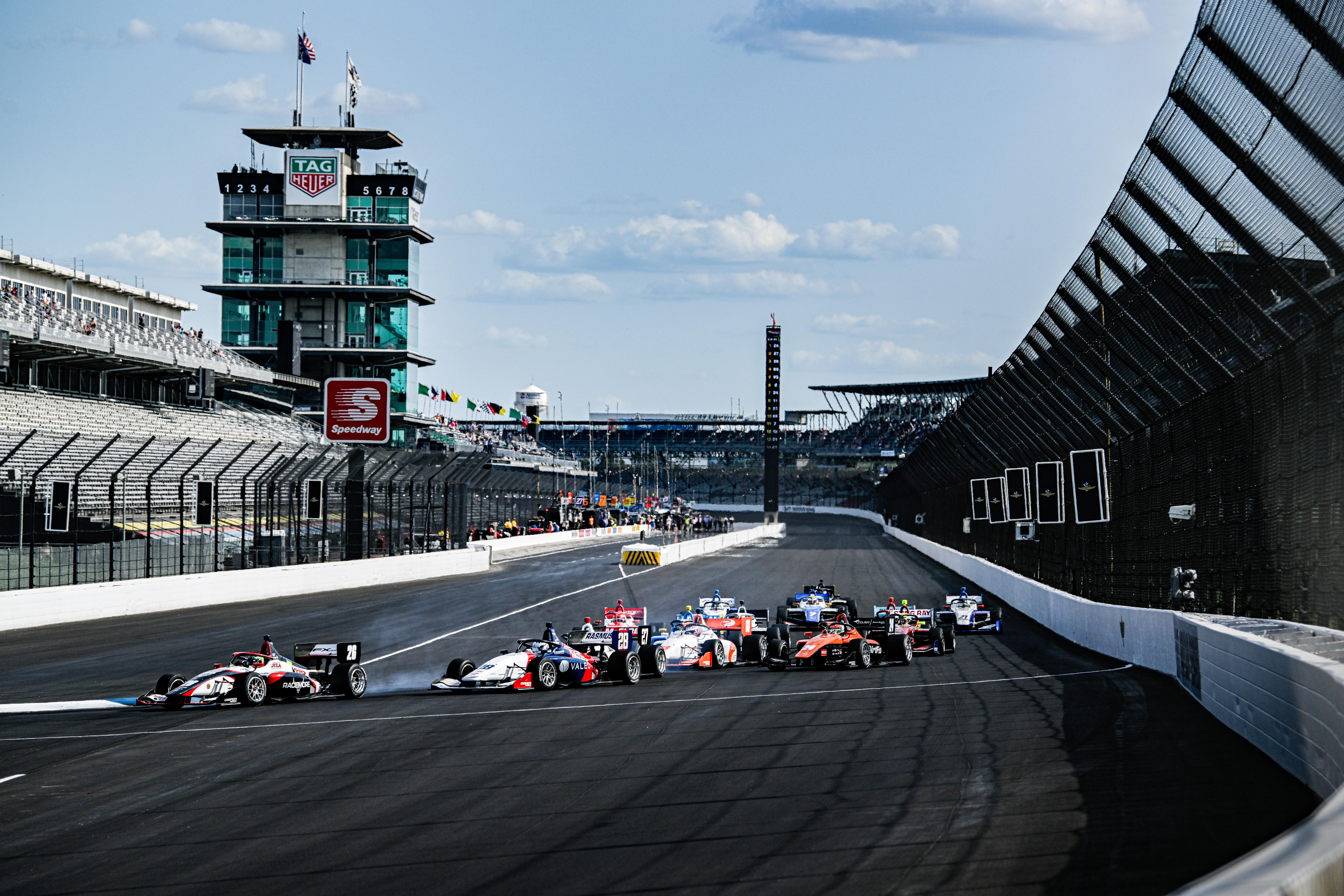 It wouldn’t be unfair for the Lundqvist camp to feel it’s done everything it could’ve to forge the right path for him to reach the end goal of IndyCar, only for the rug lining that path to be pulled from underneath its feet.

However this situation plays out, the fundamental part is money has been spent – or at least committed – by drivers and teams on the basis that the prize would be there. The fact it’s not is unacceptable.