The race carried a sinister weather undertone as rain had delayed practice and forced the cancellation of qualifying meaning the starting grid was set by the championship points order.

Because of the threat of further rain the teams and drivers had one eye on lap 106, after which if the race was halted for rain it could be declared complete. 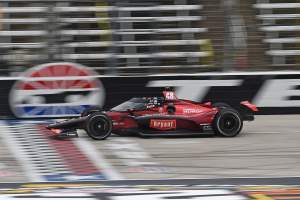 While most of the cars in the field struggled with tyre vibrations, Dixon reported no such issues as he took the lead from his team-mate and polesitter Alex Palou after two laps.

Dixon led through tricky strategy cycles as many contenders around him fell away.

As many cars began to pit for the first time starting on lap 53/212, three tours later seventh-placed Sebastien Bourdais had to lift off in Turn 2 for Colton Herta slowing ahead, and Josef Newgarden behind had nowhere to go in a concertina effect.

Newgarden – who had already lifted before the incident – clipped Bourdais into a spin and he rear-ended the wall for a heavy impact. The car was destroyed but Bourdais was cleared from the medical centre, and Newgarden was penalised and dropped to the back of the lead lap cars in 19th place but without any damage.

Because the leaders hadn’t pitted yet and due to the short nature of the lap putting drivers stopping under green flag conditions a lap down, it was a nightmare situation for the drivers who had pitted before the caution as anyone who hadn’t pitted got a free pitstop. 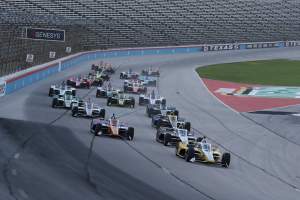 Team Penske’s Will Power (from third to 14th) and his team-mate, sixth-placed Simon Pagenaud (18th after his stop) pitted before the caution. Takuma Sato (ninth to 19th) and Marcus Ericsson one spot behind (dropped to 16th) were also caught out.

From there that set up a two-stop strategy to the end of the race, but such was the degradation of the new Firestone tyre, the undercut was incredibly powerful.

However, as the last stops began Dixon edged away again, while Rosenqvist came under pressure from rookie Scott McLaughlin who had benefitted from that first caution and an undercut in the second to run third.

Before McLaughlin could make a move, Hinchcliffe crashed with 51 laps to go after being lapped by Rosenqvist in a reversal of the 2020 race incident.

That froze the field strategy wise as everyone was able to pit and fill with fuel.

Rosenqvist had to swerve and go on the grass in the pits to avoid Marcus Ericsson, which meant he dropped to 12th promoting McLaughlin to run behind Dixon.

Dixon’s countryman McLaughlin had tested twice before coming to the race weekend but showed no sign of inexperience as he gave Dixon plenty to think about.

However, he couldn’t get close enough to pass on the one-lane track, and Dixon became the first driver to defend a Texas victory in the IndyCar Series.

Rosenqvist’s team-mate Patricio O’Ward went two laps down gambling on an undercut in the second round of stops mid-race, but that and a rapid job on his final pitstop elevated him into third, ahead of Ganassi’s Palou.

Graham Rahal rounded out the top five after passing three cars after the last caution, including Andretti’s top driver Herta. The dominant St Petersburg winner had a brake fire inside the final 20 laps which cost him a top five and a chunk of vital championship points.

Behind Rahal, Newgarden delivered an epic recovery to sixth following that early penalty for that Bourdais incident, mostly achieved by a now familiar mid-race undercut.

Jack Harvey delivered a second top 10 in a row for Meyer Shank Racing in seventh, ahead of Alexander Rossi who had a slow second pitstop which cost him dearly.

Sato bounced back from being caught on the wrong strategy early to take ninth, ahead of fellow-sufferer Pagenaud.

Just outside the top 10, practice pacesetter Tony Kanaan bounced back from downshift and gear ratio issues to take 11th on his season debut, driving Jimmie Johnson’s #48 car on the oval events.

Kansan’s team-mate Ericsson was the only Ganassi driver out of the top 11 as his bad luck at Texas continued.

Last year a broken fuel hose meant he ran out of fuel fighting for a top 10 at the end of the race. In Saturday’s race, Ganassi driver Ericsson left the box without a right-rear wheel while running sixth and finished 19th.

The grid for Sunday’s race two will be set from the championship points following this race, which are listed underneath the race result below.