Just three months after the last season ended, the 2021 running of the Porsche Esports Supercup starts on Saturday with another $200,000 prize pool.

The top 20 finishers in the championship last season all retain their place on the grid with the other 20 spots up for grabs via a qualification process run towards the end of last year.

Max Verstappen was the big name driver on the grid last year, although he only contested two rounds with a best race result of second place.

This year though the most notable big name addition to the virtual grid is Ayhancan Guven, a real-world Porsche Supercup driver who won two races in the real series last year and finished third in the championship.

For the uninitiated the Porsche Esports Supercup would appear to be just like many other esports competitions.

But its standing in the simracing community is much greater than the real-world Porsche Supercup’s position in professional motorsport’s hierarchy.

The major difference between F1 Esports and the Porsche Esports Supercup is the game they are run on, with iRacing generally considered to be one of, if not the, best simulator platforms around whereas Codemasters’ F1 games are more accessible and not hardcore simulators.

Many active racing drivers have been known to compete on iRacing, which is true with other simracing platforms as well but no other platform runs as many events as iRacing that are comparable in terms of their history and size as well as the prize money awarded. 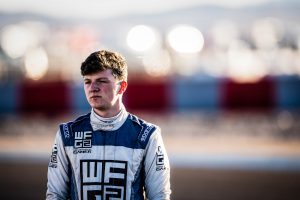 Officially the Porsche Esports Supercup started in 2019 but in reality it’s a replacement for the iRacing World Championship Grand Prix Series which began in 2010.

Therefore the Porsche Esports Supercup is one of the few championships where the really successful drivers can make a living, with last year’s champion Job (below) winning $50,000 from taking the title along with another $5600 in race earnings.

Turning it into a virtual Porsche Supercup series means they no longer race with F1-esque cars, but the series is still considered as one of iRacing’s World Championships.

The Porsche Esports Supercup is the circuit racing world championship with eNASCAR and iRX the oval and rallycross equivalents respectively.

Heading into the latest season of the Porsche Esports Supercup it should still be the same drivers competing at the front, with 2019 champion Josh Rogers looking to take the title back from Job.

Maximilian Benecke was firmly a title contender until the latter stages of last season but ended the championship in fourth, one place behind surprise performer Alejandro Sanchez – who won three races and finished on the lower steps on the podium a total of five times.

A new addition to the broadcasts is the All-Star races, which will take place before the main championship races and will feature some big name simracing YouTubers and Twitch streamers racing against one another.

Each circuit will hold, along with the two All-Star races, a championship sprint and feature race.

The 10 race calendar has also had some changes made from the previous season with Interlagos and Imola making their debuts.

The first round of the season takes place at Interlagos with the first All-Star race commencing at 5:45pm UK time on Saturday January 9.