Verstappen, who has ended up with six wins from 12 races in the series, was spun out of the lead by van der Linde in the first Friday contest, but bagged enough points on the day to end up with a 60-point cushion.

The sixth round of the iRacing series was held in HPD LMP2 machinery at Suzuka.

Van der Linde had beaten Verstappen to pole for the opening race by 0.077s, and saw off the Dutchman at the rolling start. 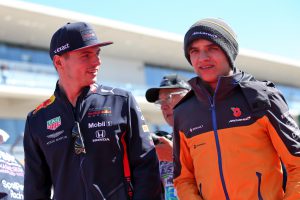 But as a pile-up further into the lap caused Bruno Spengler’s car to flip upside down, Verstappen had moved ahead of van der Linde before the opening lap was out.

Yet Verstappen’s lead proved short-lived as van der Linde lunged down the inside of the Turn 2 right-hander, with Verstappen sent into a spin as a result.

Rejoining the race, Verstappen soon overtook Tom Dillmann for sixth into Spoon only to then spin again in the second part of the corner, dropping down to ninth.

Out front, Nicky Catsburg moved up to second behind van der Linde, but couldn’t find a way past before likewise spinning at Spoon just past the halfway point into the race.

This left van der Linde with a bigger gap to second place – now occupied by Agustin Canapino – and he duly led the Argentine at the chequered flag by 1.223s.

Dani Juncadella completed the podium ahead of Catsburg and Jordan Pepper, who just held off a charging Verstappen.

Norris had started in eighth, but dropped down to 14th after contact with Felix da Costa. He later tapped 13th-placed Audi works driver Christopher Mies as the latter got loose exiting Degner 2, with the contact unsettling Norris and leading to him being collected by IMSA regular Daniel Morad.

Verstappen improved his time by a tenth in second qualifying, but was again denied pole by van der Linde, the ADAC GT Masters champion 0.082s quicker this time.

He kept van der Linde under pressure in the early laps, but soon slipped behind Norris – who had started fourth but picked off Mikkel Jensen at the start – after a moment at Turn 2.

Verstappen was unable to find a way past Norris after that, while the McLaren racer never got close enough to put van der Linde under serious pressure, with the three ultimately finishing as they ran.

Da Costa, who is involved in Team Redline alongside Verstappen and Norris, said of the series: “We had a lot of fun putting this up, massive help from Redline.

“I think it’s been amazing the amount of big names we’ve put here, and we have a big list of guys still wanting to join.

“We might do a little break now just to let everyone rest, but for sure I think given the situation in the world we’ll have time to do another season.”

Listen to the first episode of our designated esports podcast, with special guests Jimmy Broadbent and Dario Franchitti

Listen to “The new normal?” on Spreaker.