Verstappen and Norris clash – and win – in Pro Fun Cup

The Pro Fun Cup, hosted by Team Redline, featured a mixture of real world and sim racing drivers come together for two short races on iRacing. 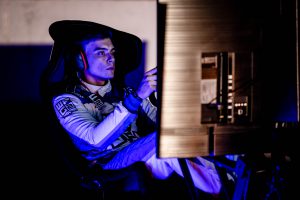 Both races were 12 laps long and held on Daytona International Raceway’s road course, with the first placing everyone in a Porsche 911 RSR.

What resulted was a battle for the race lead between Verstappen and Norris – and it didn’t end cleanly.

Plenty of on track action occurred though before that moment, including Verstappen pushing polesitter and Max Benecke out of the way to take the race lead. Benecke was sent down to seventh and behind Norris.

With 11 laps to go Verstappen, Enzo Bonito and Jonas Wallmeier all ran side by side across the start finish line. Verstappen kept the race lead and Bonito second but in the snaking first few turns Wallmeier’s car hit the side of Bonito’s, which sent him out into the grass and let Norris get even closer to Verstappen.

“I never did anything wrong in our race and I’m very happy” :: Lando Norris

Wallmeier was in the frontrunning pack with the F1 drivers and briefly held the race lead, but he had to hold the outside line for the first corner and had a little wobble as the back of the car threatened to lose all traction.

That cost the sim racer vital seconds and isolated Verstappen and Norris up at the front.

Running along the banking Norris was catching up to Verstappen in the slipstream, but then he made contact with the back of Verstappen’s car – which at that high speed point on the circuit sent Verstappen shooting off and into the wall at the right hand side of the track.

Benecke recovered to finish in second ahead of Wallmeier.

The lack of seriousness to the Pro Fun Cup was captured best by Norris’ jovial post race interview. He joked: “I think that was one of the biggest wins of my life!

“It was a fair race, at stages. I never did anything wrong in our race and I’m very happy.

“I was not expecting to be as quick as I was especially after Max spun down the back straight, don’t know what happened there!

“After he spun I thought I was going to be caught a lot quicker than I did, especially by Max Benecke.

“I was surprised at how well I did but I’m more confident in the F3, but it doesn’t mean I’ll do any better.”

The next race was at the same circuit but with Formula 3 cars instead.

The second race promised to be more like a destruction derby – and that began instantly as two separate spins on the formation lap took out four drivers before the cars had got up to racing speed.

Of the 59 drivers who started the formation lap, only 35 completed the first lap. Among those first lap retirements were real world drivers Daniel Juncadella, Kelvin van der Linde and da Costa.

The draft proved to be very powerful in the single-seaters as Verstappen soon took the race lead from Norris and then Norris took it straight back at the end of the first lap.

In the twisty infield section Norris had both Verstappen and Benecke behind him and looking for a gap. As Norris closed the door on Verstappen he opened it up for Benecke – who went down his inside and took the race lead.

Halfway into the race a clear four car group for the win broke free of the rest, with Benecke, Verstappen, Norris and Viscaal in contention.

But the four car pack soon became three when Norris went out onto the grass out of the first corner, hit a bump and lost control of the car.

In the middle of the race the two Maxes, iRacing world champion Benecke and F1 race winner Verstappen, worked together to let one driver draft past one another to pull away from Viscaal and the other drivers behind.

“We both knew we didn’t want to lead into and out of the Bus Stop, so the only option I had was to try and trick it” :: Max Verstappen

At the start of the final lap Benecke tactically held back from passing Verstappen down into the first corner. Verstappen later returned the favour by lifting off into the final series of corners and holding firm to the first apex of the chicane. That meant Benecke’s run into the left hander was compromised and so he lost momentum and proximity to Verstappen.

The last minute tactics from Verstappen gave him the race win in the F3 cars with Benecke finishing in second ahead of Viscaal.

“Max and myself worked really well together getting the other people out of the draft,” said Verstappen.

“And then of course I think we both knew we didn’t want to lead into and out of the Bus Stop, so the only option I had was to try and trick it.”

When asked about his increased focus on sim racing due to the COVID-19 outbreak, Vestappen added: “I really enjoy sim racing anyway and I did it already a lot over the winter time as well.

“For me it’s fun but also I can keep my skills and practice my skills and try to make them even better, that’s why I love doing it.”

39 mins ago NASCAR No Comments