If the marketing is to be believed then the main reason to buy this year’s official Formula 1 video game is for the Braking Point story mode, which is new to the series for F1 2021.

On the surface, this focus on the story element may seem to be all down to new parent company EA, since F1 2021 is the first F1 game released by Codemasters since it was bought by EA and is published by it as well.

EA also has a track record of integrating story modes into its other sports games, such as the FIFA and Madden NFL franchises.

However, Codemasters first trialled the idea of a story mode in F1 2019 with a brief Formula 2 section involving fictional characters Lukas Weber and Devon Butler, who then follow you into F1 and become two permanent drivers in your career save.

And long before then, the first two TOCA Race Driver games had fully fledged stories integrated into the main game. The first saw you play as Ryan McKane (pictured below) while in the second the cutscenes were all in a first person perspective to make it feel as if you yourself were the actual driver, a style Codemasters reused for the third TOCA Race Driver game.

Since Braking Point is narrative focused and F1 2021 is still brand new, any major plot details that aren’t revealed in the early stages of the story won’t be spoiled in this article.

That said, if you’ve played through TOCA Race Driver 2 and know the plot of that game then you’ll know more or less what to expect in F1 2021’s Braking Point.

You play as one driver and there are two other main drivers you interact with and there’s a lot of tension and animosity created between the three of you.

Braking Point also takes inspiration from a few infamous team-mate rivalries in the sport’s history including – and it’s a comparison that’s drawn by Anthony Davidson in one of the game’s cutscenes – the intra-team battle between Lewis Hamilton and Fernando Alonso at McLaren in 2007.

You play as Aiden Jackson, a young and promising driver who’s just won the 2019 F2 championship, and your team-mate is the highly respected and experienced Casper Akkerman and the two don’t get on with one another from the very beginning.

What is a let down though is the lack of backstory you get for the characters, particularly Akkerman since it’s implied that he has a lot of history in the sport but you’re not given any context for that.

The only time you are is towards the very end of the story when the news screen in the driver room has a written list of Akkerman’s career highlights, which reveal that he’d been racing in F1 since 2002.

That’s easily missable information though and is the sort of detail that should’ve been conveyed at the start for the sake of telling a more compelling story and to better justify Akkerman’s actions and attitude.

Even for Jackson there’s limited backstory, which feels like a missed opportunity. In FIFA’s The Journey mode, for example, at the start you get to see Alex Hunter and Danny Williams work their way into professional football and have both Alex’s mum and grandad there supporting them.

By comparison, you first see Jackson as he’s about to win the F2 championship but that’s it. We have no idea of his background and while his mum does make phone calls in Braking Point, she never appears visually in any cutscenes and we know little about her or how she helped and supported Jackson’s progression into motorsport and then F1. 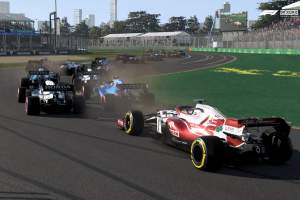 In fairness, it’s far more complicated to replicate motorsport at different levels for a story mode given the variety of tracks, cars and rules packages used on the route to F1. It was easier to achieve this element of the storytelling in FIFA since football, at any age and in any era, plays in more or less the same way.

In FIFA 19, the final game to feature The Journey element, there’s even a small section where you play a part of a match in the 1960s as Jim Hunter, Alex Hunter’s grandad.

To do an equivalent in the F1 games Codemasters would need to licence vintage F1 cars, or at the very least create and model generic replicas. Given that F1 2021 has removed all the classic cars that were in F1 2020, it seems fair to say Codemasters isn’t interesting in going down that route anyway.

A more realistic way of expanding Braking Point would be to take another leaf out of The Journey’s. FIFA 18 and 19 featured Kim Hunter, Alex’s sister, who plays professionally in women’s football. With W Series supporting F1 this year, and leading to calls from many for Codemasters to add both Formula 3 and W Series into the F1 games, gender diversity could become a more viable option for Braking Point to explore in future games.

It’s not all about the number of characters and how many different types of cars you get to drive, fundamentally a story mode needs to do a good job of telling a story in the first place.

There’s little to complain about with regards to the writing, voice acting or the quality of the cutscenes in general, but the Braking Point plot is still quite basic and incredibly predictable.

One highlight in the story is a team dinner scene, even if for no other reason than it’s the only time the story is set outside of the F1 paddock. It’s also one of the few scenes with some character development and it’s a pivotal scene for explaining the change in relationship between Jackson and Akkerman.

Braking Point could do with some expansion of the complexity of the story, especially given the minimal character backstory as well as the lack of multiple endings, in contrast to FIFA 19’s The Journey or Madden 18’s Longshot.

F1 2021 does touch very lightly on some non-F1 specific themes, such as the potential pitfalls of saying the wrong things to journalists, the idea of disingenuous journalism and how the effects of that can be exaggerated by social media. But if you don’t read the in-game emails – and specifically one email from Akkerman’s wife Zoe – all of that would pass you by.

Even if you do notice those themes, the game brushes those ideas to one side. In the early stages of the game, there’s a chain of emails from Jackson’s PA about repeated requests from a journalist to interview him but Aiden’s reluctant to do it.

Eventually though you discover – without any choice from the player or any cutscene showing it – that interview goes ahead and you only find out when you read an email from the team liaison Brian Doyle congratulating him about the successful interview and saying that Aiden came across really well in it. Which begs the question of why there was so much build up to it in the first place.

It feels like Codemasters considered exploring those ideas further, since the emails repeatedly talk about the media and the driver room has a TV with news stories and a phone where you can view a Twitter-like social media, but then stopped short of doing so properly in the final product.

Other tactics used by other sports game franchises include character customisation, which is in the NBA 2K games. But most story modes stay away from being able to alter the appearance of a character or even their name, least of all because it makes it harder to craft a story when the playable character could have any possible appearance or name.

Another idea that’s been explored in the NBA 2K games is the use of professional, big name actors such as Michael B Jordan, Anthony Mackie and Idris Elba who have all been involved in those games’ story modes in the past.

NBA 2K15 made an infamously unsuccessful move to get a lot of NBA players to do a fairly significant amount of voice acting as ‘player mentors’ for the story mode, despite a number of those players not being great as voice actors.

But when given small cameo roles they can add a lot of authenticity and a real-world feel to a story, and both NBA 2K and FIFA have had a number of high profile sports stars to do cameos.

Braking Point gets close to exploring this avenue as well since Esteban Ocon and Lando Norris appear bizarrely often in the cutscenes, but mainly as just background characters. Their inclusion though does explain why neither Alpine nor McLaren are options for which team you can race for in Braking Point.

Functionally speaking Ocon is just a mute background character but Norris has one line of dialogue, Again it’s a blink and you miss it moment.

Considering that Lewis Hamilton had a cameo appearance in Call of Duty: Infinite Warfare and a few F1 drivers have had minor voice acting roles in the Cars films, there’s definitely a possibility that Codemasters could give some actual F1 figures proper roles in a future story mode if it wanted to. 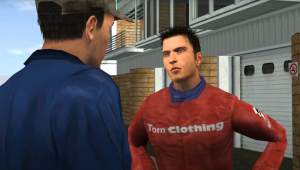 There’s endless scope to criticise areas of Braking Point and suggest improvements for a future edition of it, and certainly F1 2021’s Braking Point ends in a way that suggests it’s going to return in F1 2022.

The big question though isn’t ‘how can Braking Point be improved?’ but more ‘how good is the idea of adding a story mode into an F1 game in the first place?’

EA abandoned The Journey mode after FIFA 19 and the Longshot after NFL 19 and replaced them with scaled down story modes – another reason why Braking Point isn’t necessarily the first sign of EA’s takeover of Codemasters.

Aside from the first two TOCA Race Driver games and many of the Need for Speed titles, it’s hard to think of many racing games that have tried to tell a fully fledged story.

The first two Grid games, the spiritual successor to the TOCA Race Driver games, went for a more cinematic tone and created moments of drama through the use of high tempo music and increased difficulty when racing against the rival Ravenwest team.

They created a genuine rivalry between your own team and Ravenwest despite a complete lack of any cutscenes, words or even any real knowledge about the rival team or its two drivers.

More to the point, the F1 games are enjoyed by online league racers and are used for the F1 Esports competition and that has a totally different player base.

Those players generally have little interest in a story mode or desire for Codemasters to dedicate time to working on one and would rather it improved the online modes or the realism of the cars and tracks instead.