There’s no doubt that RiMS Racing was made by motorbike obsessives and that the game itself will also only really appeal to fanatics of both motorbikes and racing games.

It’s the first game developed by the newly-formed RaceWard Studio, based in Italy and made up largely of former employees of Milestone – who therefore have a lot of experience of developing motorbike racing games, including the MotoGP and Ride titles. 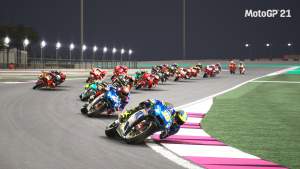 On the surface RiMS Racing would appear to be a rival to the Ride games, but that’s really not the case since both games are completely different in what they intend to achieve and how they go about it.

Ride 4 has often been called the motorbike equivalent of the Forza Motorsport or Gran Turismo games because it’s realistic while still being accessible for newcomers. RiMS Racing though is much more simulation-oriented and tries to capture every aspect of bike racing.

So while Ride 4 has over 170 models of motorbike, RiMS Racing has just eight models with no more than one bike per manufacturer. Those eight bikes are all amongst the fastest road-going bikes available, including the Suzuki GSX-R1000R and the Ducati Panigale V4 R. The key differentiator though is that the level of detail and customisability in RiMS Racing far exceeds that seen in any other bike racing game.

In between races in the career mode you’ll have to perform maintenance on your bike as parts will wear during the races. So depending on how you ride or how often you crash you’ll need to replace some parts sooner than others.

Every time you remove or fit a part to your bike you have to perform a series of button presses and analog stick rotations, meant to in some way replicate the action of screwing or unscrewing of parts from the bike.

In total there are 46 different categories of parts, which include lots of the obvious ones including the exhaust and fairing – but then there are lots of more minor ones that most games ignore, such as the various brands of oils and fluids you wish to use.

As an example, there are multiple different options for brake fluids with the original manufacturer’s available along with two other licensed, and fully 3D-modelled, bottles of brake fluid by Motul and Brembo.

It can sound overwhelming and certainly it takes a little while to get used to because it is a more laborious process to repair your bike than it would be in a normal racing game. That’s because you have to go through the motions of taking off the worn or damaged part, buying a new one from the in-game shop and then pressing more buttons and rotating the analog stick some more to fit the new part to your bike.

Also, while it looks like there’s a lot of different parts you can buy in the shop, in many cases you are heavily limited in what you can fit to your bike. So while you may have eight different exhaust options, for many other parts you are limited to just one or two different components as the rest are only compatible with one of the other seven motorbike models.

Many other racing games have had some form of maintenance aspect but never to the extent that RiMS Racing does and never has it been such a prominent and perpetual part of a career playthrough. If there’s a race where you keep hitting the other bikes or falling off, then you’ll find yourself with extensive repairs to make.

That’s not an unlikely scenario either since it’s far more unforgiving to ride a bike in RiMS Racing than it is in most other games. Lean too much and you’ll fall off, if the front is too far off the ground when going over a dip then you’ll fall off and a trip into the gravel will more than likely cause you to fall off.

For many that’s a breath of fresh air to have a game that replicates the difficulty in riding a high-powered sports bike around a race track, but the game does throw you in at the deep end and simply hopes you’ll swim. The tutorial is one lap of Zolder where it only really teaches you the controls and the first career mode event is very similar except spread over three laps and also teaching you about pitstops.

Since there is little in the way of hand-holding and there are no slower bikes to learn the basics on before riding the faster bikes, RiMS Racing does expect you to either have a certain amount of skill going into it or to get the hang of it very quickly.

There are three different options in terms of the difficulty and the level of physics simulation, and there’s the usual list of optional assists such as automatic gears or combined brakes. Those go some way to easing new players in but even on the medium difficulty setting, semi-pro, the speed of the AI isn’t much of a concern in the beginning of career mode.

One of the earliest career mode events is a seven-lap race around Zolder and it isn’t difficult to go faster than the AI, especially if you know the layout of the track. The challenge lies in staying consistent and not falling off your bike over the distance since if you do then they’ll be right up with you again.

Another early event in the career is a time-trial at Suzuka where you’re given a target time for each of the three sectors. Again, on semi-pro difficulty, those times were quite generous and as long as you don’t fall off your bike then they should be easily achievable.

So, in the early stages of career mode at least, the difficulty shouldn’t be a major obstacle for newcomers to bike racing games but it is certainly demoralising to fall off your bike multiple times in an event even if there’s built-in margin for it.

One omission which goes against the game’s ethos of being a realistic motorbike racing simulation game is that when you fall off you are reset back to your bike and so you don’t have to run back and retrieve it like you can do in the latest MotoGP game. On the other hand though, the ragdoll physics when a rider comes off his bike are quite dynamic and realistic, even if how you return to the bike isn’t.

There are nine licensed race tracks including Laguna Seca, Silverstone and Fuji Speedway along with other previously mentioned venues. There are also five fictional road courses set in different countries, namely Norway, Spain, Italy, Australia and the USA.

Those same road courses have reverse layouts, which takes the total track count, if you include the reverse road courses, up to a total of 19. For comparison, Milestone’s Ride 4 has over 30.

In short it feels like RaceWard Studio spent so long ensuring the modelling of all the bikes and the different attachable parts were pixel perfect and that the simulation of the physics of riding a motorbike was perfect, that it almost forgot to build a game around it.

The career mode is just a linear list of events and while there are research, management and engineering skill trees with different unlockable perks on them, they too aren’t particularly deep.

One comparison you could make is that RiMS Racing is to motorbike racing games what Richard Burns Rally was, and in many ways still is, to rally video games. Both prioritised realism over everything else and that strategy has kept Richard Burns Rally relevant even though it’s nearly 20 years old. Whether RiMS Racing will have the same long lasting appeal though remains to be seen.

If RiMS Racing sounds like the sort of game you would enjoy then it almost certainly is since it proudly boasts about its realistic physics model and the level of customisability with the bikes and all their various different components. In those two aspects alone the game completely succeeds.

However, if you’re still on the fence or if you want a more approachable motorbike orientated racing game then the Ride or MotoGP titles are probably the better options, especially if you’re new to the bike racing game niche.