The first of two races run on Wednesday was at Silverstone and it was an uncharacteristically poor qualifying performance for championship leader Opmeer as he was knocked out in Q1 and started the race from 16th. 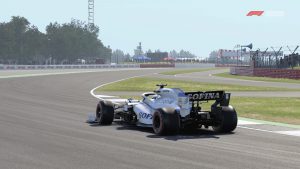 Rasmussen took pole position with Longuet in second and the second Red Bull of Marcel Kiefer in third.

The top three elected to start on the soft compound tyre. McLaren’s Daniel Moreno was among the first to pit as he stopped at the end of the fourth lap to ditch the medium compound tyres in order to do the remaining 14 laps on the softs.

The minimal running on the slower tyre as well as the two lap undercut meant he jumped ahead of Kiefer for third place.

Longuet maintained track position over Moreno and so did Rasmussen who stopped one lap after his team-mate, Kiefer.

With Moreno stuck in a train of cars who had DRS, he wasn’t initially able to use the grippier tyres to move any further up the order.

An opportunity came for him though when Longuet and Rasmussen started fighting for the race win in the final few laps.

With just over two laps to go Longuet passed Rasmussen down the Hangar Straight, a move Rasmussen tried to pull off on the following lap.

Longuet defended his position though as they ran side by side from Stowe to the first corner of the next lap.

The battling meant Moreno was able to challenge Rasmussen into Abbey, forcing the Red Bull driver to the outside of the turn and off the circuit.

Rasmussen kept a hold of second place on track but his off track excursion was counted as exceeding track limits and he was given a three second time penalty.

It's a DEBUT #F1Esports Pro Series win for @NicolasLonguet! *Those* last few laps… that was incredible 🤩

As Rasmussen tried to get back ahead of Longuet on the final lap he ran wide at the exit of the final corner and was passed by Moreno, but the time penalty demoted Rasmussen from third to sixth.

Renault’s Longuet took his maiden F1 Esports win while Moreno, who’s new to the Pro Series this year, finished on the podium for the first time.

The other Red Bull driver Kiefer also had a three second time penalty for pit lane speeding, which meant he crossed the line in fourth but the penalty dropped him down to seventh.

The biggest beneficiary from the penalties was Alfa Romeo’s Daniel Bereznay, who opted for a similar strategy to Moreno, and finished the race on the bottom step of the podium.

This is one EPIC #F1Esports race – watch with us:

Championship leader Opmeer pitted later than the frontrunners and ended the race on a fresh set of soft tyres and was able to utilise them to pass four drivers in the final few laps to end the race in ninth.

Having taken pole position by over a tenth of a second, Rasmussen lead the field away but on the second lap, even before DRS had been activated, Bereznay cleared Rasmussen down the Kemmel Straight for first place.

Just before he pitted Rasmussen returned the favour and was the first of the frontrunners to stop for new tyres.

With Bereznay in first and without DRS to defend his position, Kiefer made it a net Red Bull 1-2 once both drivers pitted.

Similarly to the race at Silverstone, overtakes were rare with everyone apart from the race leader benefitting from DRS.

It wasn’t until the final lap that Bereznay broke apart the Red Bull 1-2, as he dove up the inside of Kiefer under braking for the Bus Stop Chicane and got the better exit to finish the race in second.

Tyre strategy proved to be equally important as the drivers who finished from fourth-sixth were all ones who started on the medium tyres and changed to the softs.

Longuet, two-time F1 Esports champion Brendon Leigh and Opmeer all gained a number of positions by having the grip advantage at the end of the race.

It's round the outside for @BrendonLeigh72 😮

This is on – come and watch the #F1Esports Pro Series with us now:

This cost 2019 champion David Tonizza a number of positions as he was in fourth before the pit stops started and briefly held third as he passed Kiefer on the run up Eau Rouge on the opening lap.

Ending the race on medium tyres meant he was easily overtaken by those who were on the soft compound tyres and finished ninth in what has been a nightmare title defence for the Ferrari driver.

Despite Opmeer gaining positions in both races, his ninth-place finish in Silverstone and sixth at Spa means his championship lead has been reduced from 27 to 11 points.

The race win at Spa means Rasmussen has jumped his team-mate in the drivers’ standings to net second in the championship, but he is only five points ahead of Kiefer.

Despite the Silverstone race win for Longuet and a double podium finish for Bereznay, both drivers have still to reach a triple figure points tally unlike the three ahead of them.

Each round of the 2020 F1 Esports Pro Series is grouped into three races, so after Wednesday’s Silverstone and Spa trips, the round will be concluded with Monza on Thursday evening.