Why was Frijns' Formula E season going so badly? - The Race
Skip to content
Formula E

Why was Frijns’ Formula E season going so badly?

Suppression isn’t a word usually used when writing about the free-flowing talent of Robin Frijns.

But those who will be spending this indeterminate break in Formula E track activity gawping at the current points table may wonder how and why his results are being so contained just now.

Those standings detail that the Envision Virgin driver, a two time E-Prix winner from last season, is languishing 15th with just a single points score from five races to his name.

This places him a chasm away from leader and former team-mate Antonio Felix da Costa, who is 57 points further up the road. Frijns is also 19 points behind current team-mate Sam Bird, who he beat by 21 points to finish fourth in the 2018-19 standings.

So far this campaign Frijns has cut a fairly dejected figure. The first race in Diriyah apart, the season has produced disappointment and derision in equal measure. When Frijns gets stuck in a rut, he does it properly.

That last sentence is unfair because it points to the problem being somehow self-administered when plainly it is not. A combination of being in the wrong place at the wrong time and outlandish ill-luck has contributed to a seemingly never-ending whirlpool-like malaise.

Formula E can play tricks on the mind and mental strength is an asset just as important as an efficient powertrain.

“With this series, first of all I’m used to going into race weekends knowing we are in the top five or we’re not,” Frijns tells The Race.

“So far in my career I was always the guy who ran in the top five, whether it was [Formula] Renault 2.0, World Series, whatever.

“In Formula E you never know where you are, so you go into a race weekend, you think you are well prepared, and then you are in group one in qualifying and you start P12!

“You are then in the middle of mayhem and the race can be done pretty soon. It’s not an easy series to be in, mentally as well. 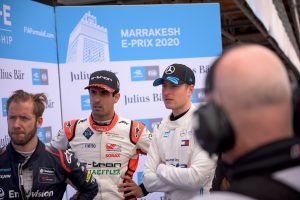 “It’s a different racecraft you need to have from a mental perspective especially.”

Drivers may feel quicker than their adversaries, and let’s face it no one has ever accused Frijns of being anything other than blisteringly quick. But even the true Formula E superstars still have to lift and coast, execute regen and apply all the very specific skills needed to be a winning Formula E driver. It’s not just about raw pace.

Let’s go back very nearly a year now, to springtime in Paris.

Suddenly he was leading the championship and the momentum seemed to be with him.

But that title challenging thrust was phantom-like. After Paris, a crash with Alexander Sims in Monaco put Frijns out of the race and he was awarded a five-place grid penalty for Berlin, where sensor issues also hit. Then he was drop-kicked out of the Berne E-Prix just 50 metres in, which crushed any hope of a real title push. 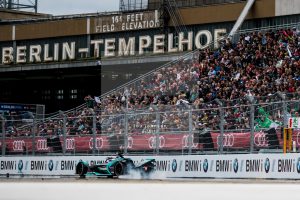 He closed the book on Formula E’s fifth season “pretty well for myself, thinking season six will be good”.

“I’m happy with the team which I’m working with, the car is good, I wouldn’t say we have the best car but we are usually up there if the car runs well,” he adds, reflecting.

“So I was heading to season six thinking, ‘I want to win the championship and I want to compete for the title’.

“The very first [round of the 2019/20 season at Diriyah] went really well, qualified P12, group one, I think it was quite decent, got back to fifth [in the race] which was the best [possible] from group one.”

From then onwards everything went downhill for Frijns and points have been dryer than his own wonderfully arid sense of humour.

“In Diriyah I went off in race two, my own mistake, I was unhappy with the car the whole race long and I was struggling with it.

“I was really pissed off after the first weekend because I had a different perspective of how the weekend should go.”

Santiago – where he had finished fifth one year previous – then “went to shit”, with sensor issues in practice and a driveshaft failure. In qualifying a different Audi rear end was applied and destabilised momentum further.

“I always have good racecraft and race pace. And every time something just goes wrong” :: Robin Frijns

“We went into qualifying with a car I didn’t know, I turned into Turn 1 and the car spun, I had no rear end.

“Then in the race I had a puncture on lap one and I was a lap down. That for me was the lowest point of this season so far.”

Mexico was a different race for Frijns. He had the pace and was just making sure points were scored. Fourth, and comfortably stalking Sebastien Buemi’s Nissan, he was also saving chunks of energy for an expected crack at the podium.

“I was waiting for the last 10 laps, and I got T-boned (by Nyck de Vries),” says a visibly disconsolate Frijns.

“It’s definitely not easy. The season is long but at the end of the day if you have three or four DNFs it’s very hard to come back from that.

“But then again if you look at [Jean-Eric] Vergne last year he had a similar issue. He didn’t score any points in the first three, four races and he won the championship.”

Frijns acknowledges that he is not a top-line single lap qualifier, and doesn’t take offence at a mention of this chink in his armour.

“I’m always coming back in the race. This has never really happened before in my career that I lost the car in the race. Is it pushing too much, is it being annoyed? I don’t think so” :: Robin Frijns

“I always have good racecraft and race pace, I showed that in Mexico. And every time something just goes wrong,” he says.

“The competition is super-high and we as a team always try to get the maximum out of it.

“We learn from our mistakes, we learned from the second race in Riyadh that we pretty much went in the wrong direction on set-up for the race, and then Santiago was a different topic.”

That was followed by 12th in Marrakesh, where he had finished second the season before.

But what of those rarest of sights? Frijns losing a car. It happened in Diriyah and Santiago and it caused double-takes in the press room.

“But this has never really happened before in my career that I lost the car in the race,” he admits.

“Is it pushing too much, is it being annoyed? I don’t think so.

“I’m definitely a driver that drives on feeling only. These are 90 degrees, 180 degrees corners [in Marrakesh], [there’s] not much feel for what’s going on. I’d far rather do Paris, I feel more comfortable with it.”

Football-loving 1980s kids will remember some supremely talented Dutch footballers that made a sumptuous artistic stamp upon the English game, particularly at those provincial miracle clubs that brought previously unheralded silverware to Nottingham Forest and Ipswich Town.

Arnold Muhren, Frans Thijssen and Johnny Metgod brought an ‘oranje glow’ to an often dank period of football. Their flair and skill is remembered to this day, despite it often getting flattened by injury, ill-luck and agricultural defending.

The assumption is that Frijns will start to feed his own expressive driving and attacking racecraft flair with a fightback which, come the end of the eventual end of the currently-paused season, will match his own crowd pleasing brio.