'What the f**k was that?' New York race two's wildest moment - The Race
Skip to content
Formula E

‘What the f**k was that?’ New York race two’s wildest moment

The pair were dicing for fourth position when Evans got a run on the Mercedes EQ driver from Turn 5 to Turn 6 and moved to the inside.

De Vries made his defensive move just before the braking zone with the Jaguar forced into a compression area where the track falls away.

WHAT. A. SAVE. 😮‍💨@mitchevans_ catches a bump and almost spins!

This unsettled Evans, who was strong on carrying speed into the Turn 5 right-hander and forced him to try to wrestle control of the resulting lurid slide. He did so and was able to rejoin without losing a position.

The Kiwi then further articulated his ire but asked for the move to be reported to the stewards, which his Jaguar team did.

“These f***ing idiots aren’t even trying to avoid the collisions.”

Evans then asked for an update on any latest regarding contact with race director Scot Elkins.

After the race Evans was still critical of the incident with De Vries, saying that he “made a move and all of a sudden this massive, well I didn’t notice until I’d hit it, pothole was there”.

Evans, who finished third, felt his chance of battling Antonio Felix da Costa for victory first went wrong “when Nyck made his stupid move on me at the hairpin”.

.@AlexanderSims is nudged through the hairpin by @nyckdevries as he goes for a move on @mitchevans_ 💥

That was a reference to a dive on Evans in which De Vries made contact with both the Jaguar and the Mahindra of Alexander Sims just ahead, which was tapped into a big slide but continued in front of them both.

“I was battling with Alexander and he just went super aggressive,” said Evans of De Vries.

“I guess he was told to overtake me but he had no pace and then I just got shuffled back.

“Then on top of that the pothole lost me a lot of time.

“The car bottomed out and it was right when I had to brake, and I just had a huge moment, I thought I was going down the escape road.”

Evans explained how he “gathered it up” and didn’t lose any positions but suffered from having “huge flat spots on my tyres”.

“It took a few laps to get myself back into a rhythm and we still had a really good pace. To get a podium after that was pretty good.” 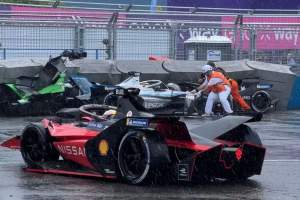 The Jaguar driver also rued that loss of time as he felt he had a strong opportunity to fight eventual winner da Costa and Stoffel Vandoorne.

“I was feeling good and when you’ve got a feeling with the car and you feel like you’ve got a good opportunity, well that was what it felt like today,” he said.

“I leave today satisfied but feeling like what could have been. It could have been better, but also a bit of relief because yesterday we were unlucky, a lot of us were unlucky for the call that was made [with no restart], so we lost out on big points.

“It’s a shame but we had to at least score big in one race and happily we did that today.”

De Vries came in seventh after surviving his own near-identical moment at the same point of the track with a prominent compression, in his case when trying to pass Sims.

Another miraculous save, this time from @nyckdevries 🤯

“I heard that he was criticising me, but I think he probably didn’t know what actually happened,” De Vries told The Race in reference to Evans.

“I tried the same on Sims later on, and the same bump caught me out as well. That just caught me by surprise, because I didn’t know it was there and then I kind of lost control and that was it.”

So much drama 🤯@nyckdevries clips the wall whilst trying to pass @AlexanderSims before picking up a nudge from @sambirdofficial!

De Vries also refuted suggestions that he squeezed Evans too aggressively, saying that “there was space for him, because I even opened up [the steering] eventually.”

“I mean, he even went further than me, so I think it was just the bump that obviously, when you hit the bump and you hit that huge compression and the wheels come off in the air and you lock all four tyres.

“It’s clear you’ve kind of just run in too quickly, but not necessarily Mitch misjudging it but more the fact that the bump makes you lose deceleration, basically.”