After a safety car start due to the track being slightly damp, front row pair Stoffel Vandoorne and Andre Lotterer only got as far as Turn 7 on the first racing lap before colliding as the Porsche tried to pass the Mercedes.

Lotterer was given a 5s time penalty and was able to continue in seventh in a slightly battered car, while Vandoorne had to extract himself from the escape road and dropped right back to 13th.

That handed the lead to Oliver Rowland, but the Nissan driver was already under investigation for exceeding the power limit in an apparent power strike on the first lap and duly got a drivethrough penalty.

His plunge to the back set up the Lucas di Grassi versus Vergne lead battle that then took centre stage. 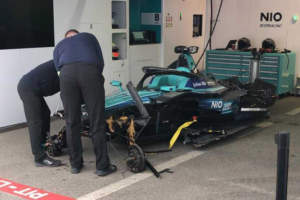 In the first race for the new 2021-powertrain-spec DS Techeetah, freshly rebuilt following Vergne’s involvement in the huge morning practice crash, the double champion took an early first attack mode deployment that seemed to give him the edge.

Di Grassi left it later and was closing back in on Vergne when the DS dived off line for its second attack mode, with di Grassi following suit on the following lap.

Vergne pulled a small cushion by getting past Nyck de Vries – who led as he was yet to take attack mode for a second time – faster than di Grassi could, but once the Mercedes peeled over to the deployment zone the Audi was free to catch Vergne again.

A sublime dive into Turn 4 with just under seven minutes on the clock put di Grassi back into the lead and on course to end the works Audi team’s Formula E win drought.

But then di Grassi then suddenly slowed with a mechanical problem on the kinked straight towards Turn 7.

Live timings and how to watch the race 👉 https://t.co/sHOKGxvLZW#RomeEPrix pic.twitter.com/qAEQd705lp

As the field went to dodge the Audi, Vandoorne – who had got as high as fourth in his recovery charge, hit a bump offline and spun across the track into the wall, with team-mate de Vries smacking the barrier trying to avoid the other Mercedes and having to retire too.

That left Vergne clear to take victory behind the safety car, ahead of the hard-charging Jaguars of Sam Bird and Mitch Evans.

Robin Frijns had been in the thick of the lead battle for Envision Virgin too and claimed fourth.

Sebastien Buemi gave Nissan e.dams the consolation of fifth after Rowland’s penalty, with Rene Rast surging from 20th on the grid to sixth for Audi ahead of Pascal Wehrlein’s Porsche and Mahindra driver Alex Lynn.

Maximilian Guenther survived a wild spin at the same spot where Vandoorne crashed to take ninth, with Nick Cassidy completing the top 10 on the road before being penalised for a collision with Jake Dennis.

Reigning champion Antonio Felix da Costa managed to get into the points positions after his qualifying error only to also sustain damage in the chaos around di Grassi and the Mercedes.

NIO333 was not quite able to get practice crash instigator Oliver Turvey’s new car built up around a spare tub in time for the race.