The story behind a secret ‘completely nuts’ Formula E shunt

News that Formula E could be returning to Donington Park later this year sent The Race reaching for the archives and in particular to investigate a now semi-legendary accident that occurred at the pilot test race held in August 2014.

The incident took place after the chequered flag in a ‘race’ that was ‘won’ by Renault e.dams’ Sebastien Buemi. 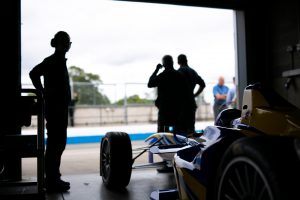 The special event was organised to test all sporting, technical, operational and media protocols before the then nascent series headed off to Beijing for its first ever round five weeks later.

Buemi was returning to his tented garage when he came into collision with Karun Chandhok’s Mahindra Spark-Renault.

Although the damage to the cars was significant, the consequences could have been far worse according to Chandhok – who went on to complete the first full season for Mahindra alongside team-mate Bruno Senna.

“I still think that was the biggest shunt I’ve ever had if I’m honest,” Chandhok tells The Race.

“Although because it was an unofficial race, a secret race and a secret shunt, the world probably doesn’t know it happened if at all!”

All drivers taking part in the test event had been briefed that the mandatory car-swap pitstops would be completed using the tented paddock away from where the main pit buildings are located, in an area further down the straight.

Therefore drivers would complete their pitstop and rejoin the race at Redgate, on the outside of the corner through a special access gate.

Also in this morning briefing drivers were explicitly told that when the race finished they had to “get down to the end of the straight, turn left into the pitlane entry to come in the reverse way down where you would have exited in the race,” according to Chandhok.

Crucially though, Buemi had not attended the briefing as he had been on Toyota World Endurance Championship testing duty and flown into the UK just before the start of the test race.

“We had this big charade of going to see some sort of fake race officials, I can’t remember who, and they gave him a fake warning because of the fake race!” :: Karun Chandhok

While Buemi cruised to Formula E’s very first ‘win’, Chandhok suffered issues at his pitstop and lost a lap on the leaders.

As the Mahindra driver came out of the last corner onto the straight, Chandhok saw the chequered flag as the race finished. But as he went down the straight he suddenly saw Buemi turning sharp left right in front of him.

“Basically, for some reason, he thought it would be a good idea to stop halfway down the straight, and go down the main pit entry, rather than the one we were using at the end of the straight,” remembers Chandhok.

“So he just turned and I nearly T-boned him. Obviously that would have been pretty catastrophic for both of us if it had been a pure T-bone. But luckily I went across to the left and ran into the front part of his car, then went down the whole sidepod of mine, writing off the entire right-hand side, plus the whole front end and the left-hand side of his car.”

From Buemi’s point of view he recalls that missing the briefing undoubtedly contributed to the confusing situation.

“I had to miss the briefing due to WEC clash and I basically drove back through the main one [pitlane] which was 200m before the [test one]. He was a lap down and when I turned after the chequered flag he stayed flat and T-boned me,” Buemi tells The Race.

“But that was after the chequered flag and he did not look ahead.”

Chandhok was at first concerned for Buemi’s welfare but then became angry as a consequence of an immediate fiery response from the Swiss driver.

“I went to him to say ‘are you OK’ and his immediate reaction was “what the fuck are you doing man?” at which point I nearly decked him because it hadn’t even occurred to him that he’d been in the wrong. It was extraordinary,” says Chandhok.

“Then we had this big charade of going to see some sort of fake race officials, I can’t remember who, and they gave him a fake warning because of the fake race!

“It was just the most bizarre thing because he’d obviously got it completely wrong. There were some witnesses to it like Andrew van de Burgt [The Race’s Global Head of Motorsport who was at the time Formula E’s communications chief] who, amongst others, saw it. It was just completely nuts.”

As well as this drama, Chandhok also remembers with a mixture of wonder and trepidation the uncertainty caused by the weather at this inaugural test.

“All the teams had received one out of their four cars by that stage and so we all get to the circuit and it is absolutely pissing with rain. I mean it was proper Donington, English weather,” he says.

“We all sort of stood there, looking at each other going ‘well I don’t want to go first to go out’ because none of us knew if you could drive [in those conditions].

“It sounds weird none of us knew if it was safe to drive these cars in the rain. Obviously it was, but it was such an unknown back then.

“I remember I was quite happy when Bruno went first for our team. I think we had a coin toss or something to decide, but Bruno ended up going first, which I was glad about.”

Then there was the legend of Formula E’s collective charging having shutdown the entire supply of Castle Donington!

“So then, when we put all 40 cars on charge together, we shut down the power grid of the town. And I remember having some local residents came along and the circuit guys having some awkward conversations with them about how we managed to shut their electricity down!”