The task that Hankook had to tackle when it was awarded, somewhat surprisingly, the tender to supply the entire Formula E grid with tyres for the Gen3 period cannot be underestimated.

The company had never delivered an all-weather product for a single-seater – or indeed for any other category save for the traditional intermediate – in its long racing history.

The first testing of a special ‘mule’ car, which is believed to be a 2019 spec Formula 2 car, albeit heavily modified and weighted, took place in late summer of 2021.

From there the first real test and development FE car, minus bodywork, was track tested.

But in reality Hankook had already done a mountain of work with its designers and engineers, many of which had recent DTM and Formula 3 experience. 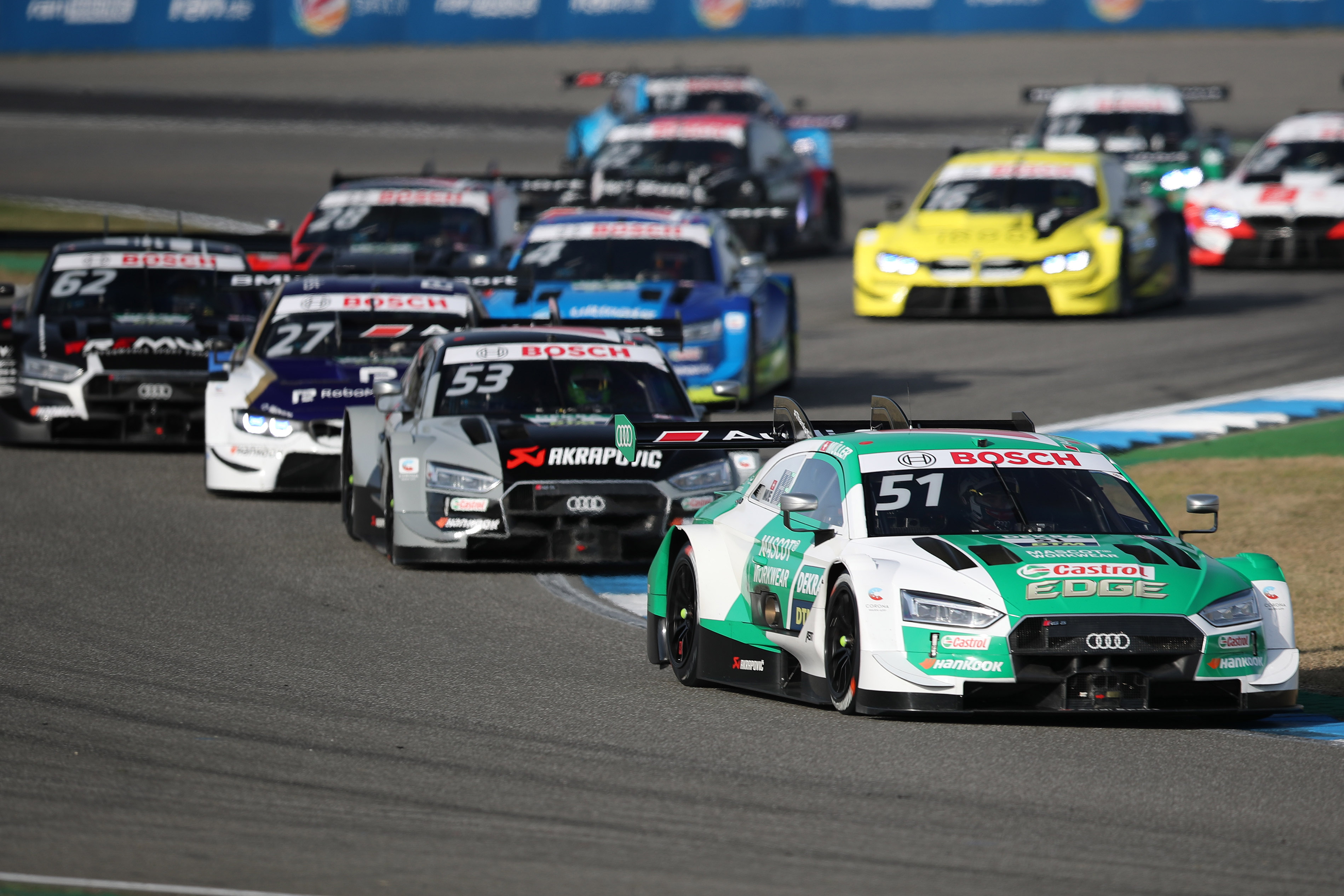 Leading the team as it moves into Formula E is chief engineer Thomas Baltes, who was previously working in the DTM.

He talks about “a pretty good compromise” regarding the new product, as he thinks that “for the drivers it’s going to be pretty challenging”.

When you add into the mix the new cars plus the movement of drivers, with 13 of the 22-strong 2022 grid driving for a different team going into 2023, “their whole world has completely changed and the cars have completely changed,” Baltes tells The Race.

The disruption to some of the testing has clearly been above and beyond what is normal in a new technical rules set, and it has impacted on Hankook to some degree. 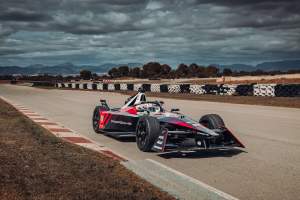 But Baltes feels that a combined work ethic for the greater good of the championship has been both a necessary stance and had a positive impact.

“We had technical issues [with the car] but all of us, also from the tyre side, we give our best to have the best solution for the package ready,” he says.

The preparations for Hankook started in the 2020/21 period when Baltes and others from the company, notably Hankook’s motorsport director, Manfred Sandbichler, began visiting the Formula E paddock.

At a variety of races Baltes and his colleagues sourced as much information as possible from the track surface. From the smoothness of Mexico City, the billiard smoothness of a constantly resurfaced Monaco, to the quirky, ancient surface of Tempelhof, Formula E throws up a vast array of racing dancefloors. 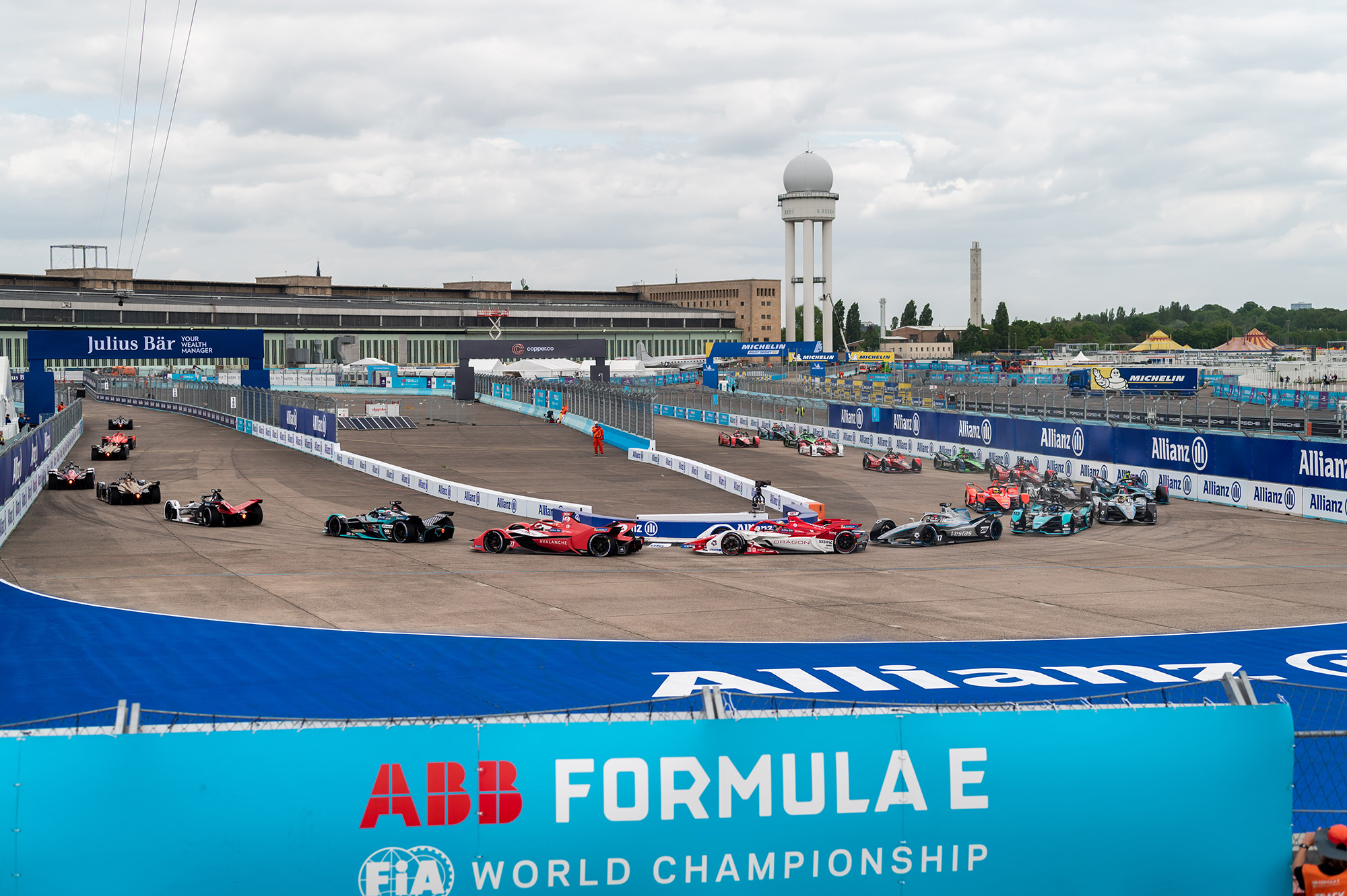 But there will also be at least three unknowns to everyone in 2023: Hyderabad, Cape Town and Sao Paulo, all of which play out in the first five events of the season. That’s a massive challenge.

“We also take our measurements from the Tarmac [of previous tracks used] so for sure it’s completely different with other projects because the Tarmac on a street surface is not completely smooth depending on the location where we are,” says Baltes.

“But it’s not only the tyre, it’s the whole technical package where they have to also find some solutions for the battery, for the powertrains and so on. I think still there is a lot of homework to do for all of us.

“I would say we’re on a quite good base which is also even tested by most of the teams and they agreed that it can go like this.

“We have no heating, nothing, so the tyres should come back pretty fast and should get more or less in the same performance window. This is, at the moment, possible.” 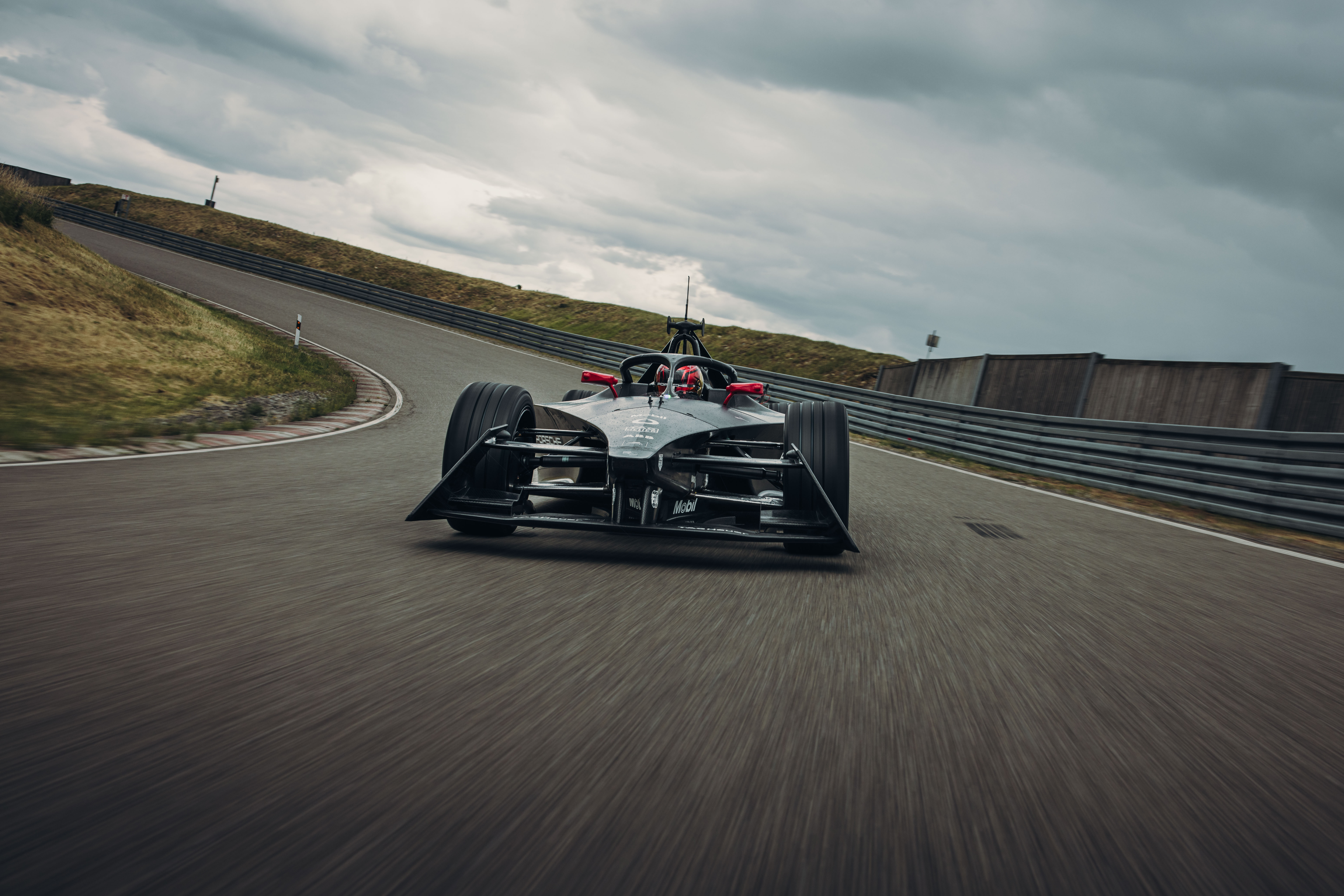 The feedback from teams and drivers was initially mixed at best. Since then several engineers have indicated to The Race that Hankook, under the circumstances, has produced a strong product.

The final spec of compound to be used came relatively late (early November), with other alternatives known to have been tried out.

It is understood that the main concern was in wet conditions where the grip levels were said by one team engineer to be “minimal”.

So, the different compound chemistries and constructions have been evaluated and the teams will now have scope for understanding more and developing their own strategies, cambers and pressures to ensure they find windows of performance they can exploit.

“We will also have something like a minimum pressure which we’re given from the FIA guys during the weekend,” said Baltes

“It is not yet finally decided, but it will be published also during the weekend so the teams have to accept and follow it.

“I would say, most important is to get the performance window under control; this is now the biggest homework regarding the tyres.

“From the pressure side, the teams are more or less open. We don’t give so many values that they have to accept, it’s only our minimum pressure.

“This is what we even have seen during the first testing rounds, that many teams are really testing different things, also what is able to get back the tyre to work, into the performance window, so for sure we will see different possibilities.” 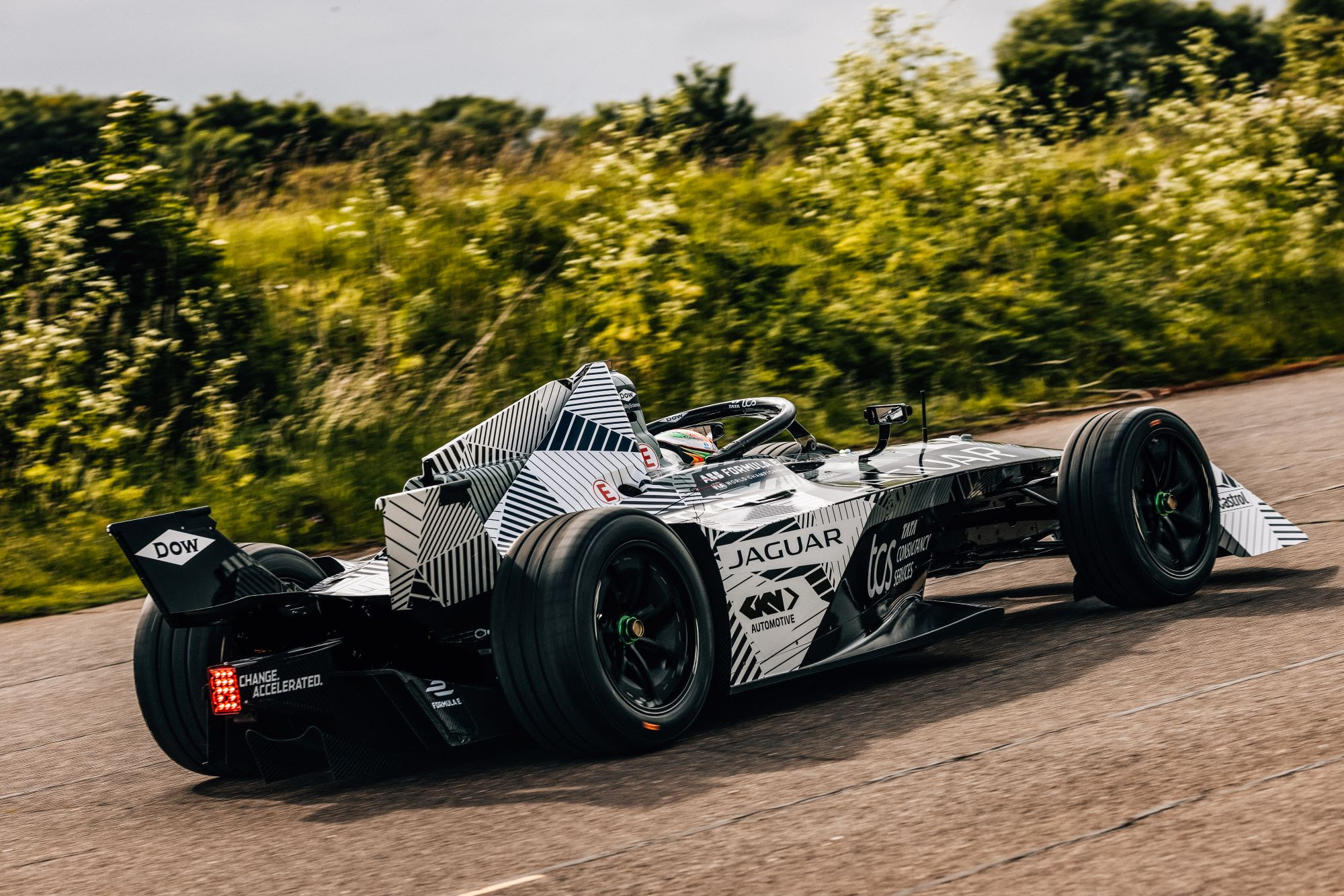 This provides a real challenge to the engineers, primarily in attempting to match up their vehicle dynamics to what they have systems-wise on the powertrain and software.

The Hankooks are durable with a low wear rate and early indications are that they recover from locking episodes.

The teams obviously are being coy about what they have learned so far in testing but there are basics such as if the front tyre is working hard it’s likely also to be overheating the rears, or if the front tyre is not being worked enough, so it’s understeering a lot. The teams and drivers haven’t got a good balance with the two axles yet.

The initial journeys in understanding how the Gen3 car works with the Hankooks will involve putting the two axles roughly in the right zone to see how they get the tyres, which remember do not have the benefit of tyre warmers, up to a workable temperature. 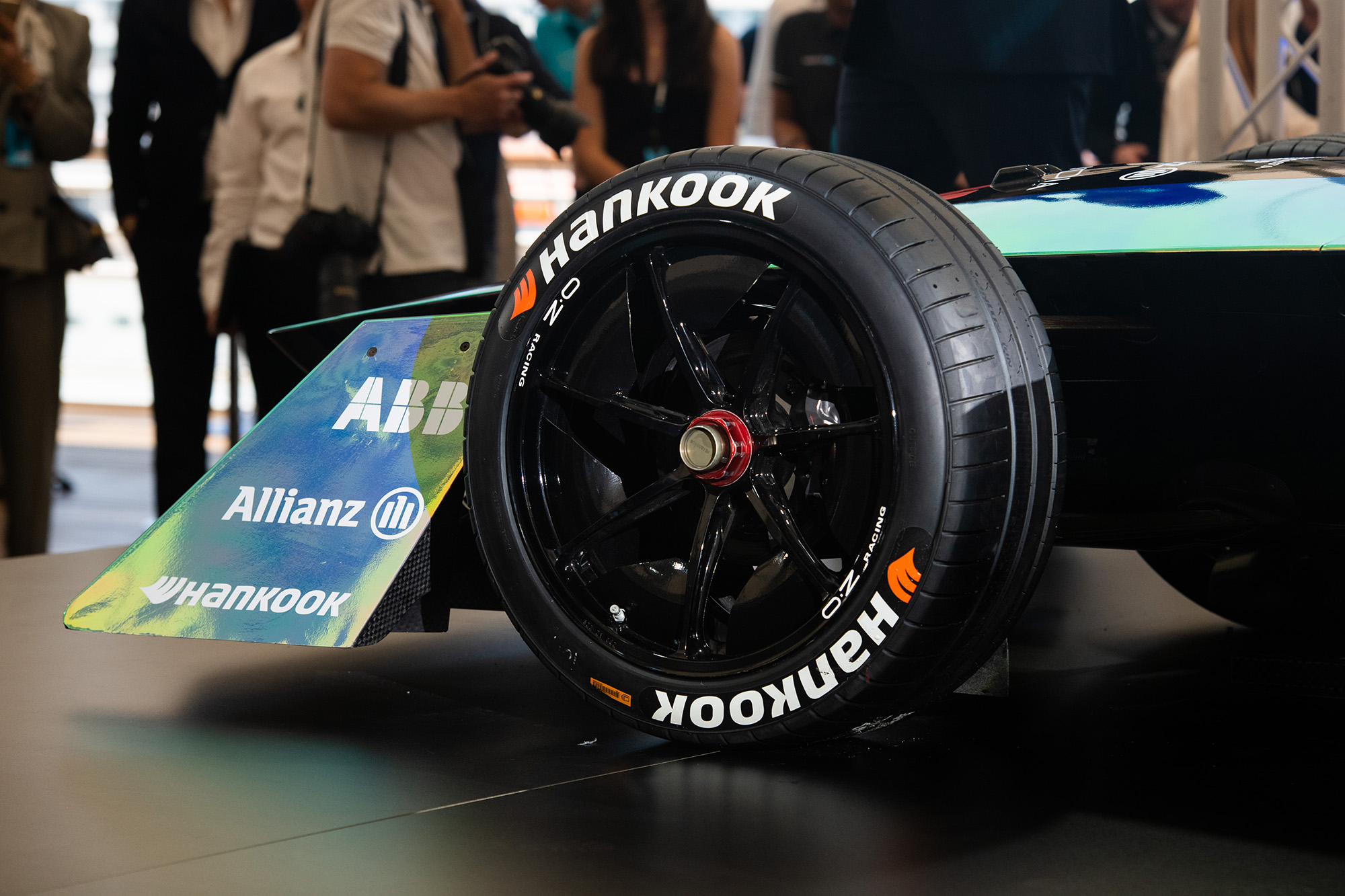 Hankook promises that its everyday consumers will benefit from the development of the new Formula E race tyres through technology transfer. The new iON road tyres for both summer (Hankook iON evo) and winter (Hankook iON Winter), will provide ‘resource-friendly mobility to be fitted on modern, premium electric cars’.

The significantly lower rolling resistance will also add ‘more range, high traction, even on wet roads and very good braking power for top safety and a high level of durability notably reflect the demands that electric cars place on their tyres’.

In a nutshell, that is the major reason Hankook bid for and won the tender. It made it happen so it could work on a marketing and technical strategy centred upon a sustainability series because it has triggered a sustainability revolution in its own company.

Sustaining the goodwill of the teams and in particular the drivers though will be a whole different challenge in Formula E.

Hankook has had a strong start but Gen3 is showing no signs yet of discarding some throbbing growing pains, particularly in the battery and spares areas of the project.

For everyone in the Formula E paddock, 2023 will therefore be a season of learning, adapting and storing knowledge for the seasons of Gen3 to come.

Hankook will be a major part of that and is likely, for 2023 at least, to have a major say in which team and which driver can find the advantages that will make the difference in the only all-electric world championship.