Rene Rast admitted his dramatic last-lap pass on Andre Lotterer to claim a maiden Formula E podium was a “dive-bomb” move but said it was motivated by having been a “punch-ball” in his early races.

Rast snatched the position with a robust move on Lotterer’s Porsche halfway around the final lap of the fifth Berlin race.

Called up by Audi after it split with Daniel Abt following the esports imposter controversy, DTM champion Rast felt he had lost out in wheel-to-wheel combat in the initial Berlin races and didn’t wish to be a “punch-ball” again. 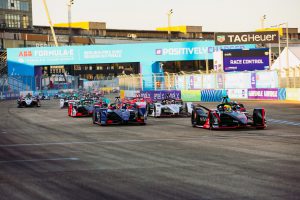 “The team told me that I had a half a percent more energy left for the last lap on Andre and I saw he was struggling in sector two and he was lifting way early,” said Rast.

“So I tried to dive-bomb him a little bit.

“There was a bit of rubbing, but I learned in the last four races that rubbing is racing in Formula E.

“So I tried today and had a much better result.”

Both Rast and Lotterer were placed under investigation for the incident but Lotterer’s demeanour post-race was not overly critical, and ultimately no action was taken.

“He was aggressive and I didn’t have much chance, he just came inside and drove a bit into me,” Lotterer said.

“There was a bit of rubbing but he just had that little bit of extra energy and managed to get the edge.”

Rast has a deal with Audi only for the Berlin races but the team is expected to make a decision on who partners Lucas di Grassi for the 2021 season within the next few weeks.

Double DTM champion Rast has said that the current Tempelhof races are a test run to see if he adapts to the unique demands of the all-electric series.

“For me at the moment the first six races are just to try to see if in Formula E I can manage somehow,” he said.

“I think today we showed that we have the pace and also we learned a lot in the last four races. So let’s see what happens next.”

Rast has so far scored 16 points from the five races in Berlin and has helped Audi to maintain sixth position in the teams’ standings.