Mercedes Formula E team to relocate to Brackley F1 base

The Mercedes Formula E team is making changes to the way it operates for its long-term future in Formula E and will relocate to a base at the Mercedes F1 team’s premises in Brackley for the start of the 2021/22 season.

The Race can reveal that the restructuring means the team will use a single permanent base in the UK after a transitioning phase is completed throughout 2021.

Presently the Mercedes FE operation stretches across several sites with its race operations based at HWA’s headquarters in Affalterbach, southern Germany.

The powertrain is designed and managed through the Mercedes AMG High-Performance Powertrains company located in Brixworth and it also utilises the Mercedes F1 facilities in Brackley.

The future set-up of the Mercedes FE squad will be concentrated into one area of the Brackley site but the present team structure will remain for the entirety of the upcoming seventh Formula E campaign, which starts with a Santiago double-header on January 16/17.

The roots of the team’s set-up and future changes come from both Mercedes’ decision to complete a taster season with HWA in 2019-20, and the upcoming cost-cap legislation which will be introduced to Formula 1 in 2021.

That cost cap will come in to effect on January 1 and teams will be regulated to a $175m spend during the 2021 F1 season.

After the July 2017 confirmation that Mercedes would enter a factory team in FE, HWA became a conduit for an experience gathering exercise for the first Gen2 season in 2018/19. 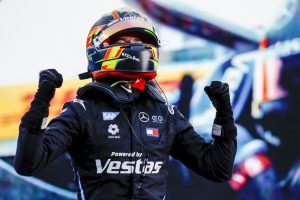 Mercedes’ withdrawal from the DTM at the end of 2018, announced earlier that year, led HWA to be the initial operational and technical arm of Mercedes’ entry due to its significant motorsport experience.

This then morphed into the Mercedes entity in 2019, when it still used the Affalterbach facility as a race operations hub.

Speaking to The Race about the new plans, Mercedes FE team principal, Ian James said the multi-site set-up of the team “made absolute sense to utilise that experience to get up and running in Formula E”, but having five different sites in two different countries “isn’t the most efficient set-up, if I’m honest.”

“First and foremost it’s a Formula E decision but it’s done with the broader motorsport picture in mind.

“For season eight, we will locate the race trackside operations to the UK, in Brackley. So that’s really just to leverage those opportunities and those synergies that we’ve got with the wider Mercedes Benz motorsport family.”

All of Formula E’s current manufacturers are expected to make decisions on commitments to the third iteration of Formula E’s rules for the 2022-23 season.

Mercedes is expected to confirm its intention to continue its Formula E programme in the first half of 2021 and James confirmed that the Mercedes Grand Prix and HPP facilities will be where the R&D will take place.

“We’ve got the homologation freeze for season eight [2021/22], so there’s not quite as much pressure on that.

“We’re yet to we get to see any key details on that perspective, for Gen3.

“There’s no final decision to be made on that at this stage, but the intention is to transition the vast majority of that [R&D] over to Brackley as well,” he confirmed.

HWA is set to play some part in the programme, and James started that Mercedes’ success in its first full-season “has been very much credit to HWA’s experience, and also their flexibility in terms of the way that they’re set up, and for that reason, they will still remain very much part of the programme going forward.

“So there’s certain elements that they will continue to take responsibility for in continuing a collaboration for season eight and beyond.”

Mercedes announced last week that it would race from the start of the new Formula E season with a new powertrain and with an unchanged line-up of Stoffel Vandoorne and Nyck de Vries.