A horrendous opening lap of the first London E-Prix of the weekend curtailed the races of Jaguar’s Formula E title hopefuls Sam Bird and Mitch Evans.

Bird leapt from 13th in the championship to the top of the standings after claiming his second victory for Jaguar at the previous round in New York, but London has so far proved a frustrating affair for the winner of the second ever London E-Prix in 2015. 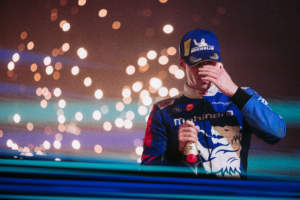 With the worst of the track conditions in group one, Bird qualified in a lowly 18th place at a circuit that prior to the race, he said needed significant modifications in the future to allow for overtaking opportunities.

However, Bird’s progress was immediately halted with an opening lap shunt that gave his Jaguar I-Type 5 terminal damage and led to his seventh non-score in 12 races.

“We’ve been quick here but we’ve been dealt a bad hand here,” Sam Bird told The Race. “There’s nothing I can really do about it.

“The qualifying performance was pretty decent. In the race, four into one doesn’t go around Turn 5.

“Somebody had to be worse off, and unfortunately, somebody has hit me up the back and put me in the wall. It’s damaged the track rod and that was the end of the race.”

Alexander Sims was sent into the wall on the first lap and multiple cars were involved in the follow up on the tight twisty track – including Bird’s Jaguar team-mate Mitch Evans. 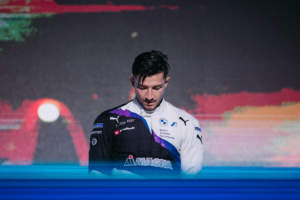 “I just got tapped from behind and hit the wall,” Sims told the Race. “All I’ve heard is [Rene] Rast hit Mitch and Mitch hit me.”

Rain is forecasted for the second race tomorrow and the part-indoor, part-outdoor venue could throw up a number of surprises and disrupt the usual convention of the qualifying groups getting faster and faster.

That forecast prompted the decision for Jaguar not to return Bird to the circuit after he made his way back to the pits following his first lap crash.

“Could have run around at the back but looks like tomorrow’s race will be wet, so why do that? I’ve basically saved a set of tyres, so that could be quite good for us,” Bird added.

For Evans, opening lap contact left him visiting the pits and he eventually finished in 14th place – albeit with the fastest lap of the race.

It marks the third consecutive race outside of the points for Evans, who lost a likely Jaguar 1-2 in the second race in New York with late-race drama.

“I had a good start,” Evans told The Race. “I got passed [Joel] Eriksson, and was sort of just following [Nyck] de Vries and the battle ahead.

“Out of Turn 5, it just really checked up, Sims had contact, did his driveshaft or something I don’t know. Then he just stopped completely.

“I got hit from behind, and then my front wing was damaged. One lap later, it gave up and went under the floor.”

While Bird holds onto his championship lead by a single point, Evans has dropped to 13th in the drivers’ championship and will run in group three for qualifying ahead of the second race of the weekend.

“It’s up and down,” Evans added. “Peaking too early is not good, at least we can make hay, and if you’re in group 1 at tracks where you can make superpole from group 1, that’s the only way you can make progress.

“We’ve had a strong season but now I’m down in 13th out of nowhere. Unfortunately, it’s just not falling our way just yet.”

The 2020/21 season will conclude with the second London race and a double-header in Berlin next month.

Jaguar’s title charge last year fell apart with six difficult races in the German capital. Evans says the team will be making significant changes ahead of its return.

“We’ve got things in the pipeline, but we won’t know until we get there. I wouldn’t say it’s worrying, if I could choose other tracks to go to, I’d definitely choose elsewhere to finish the season but it is what it is, you’ve got to try to take it on the chin.

“Everyone’s got their bogey tracks of the year and that’s ours.”