How Audi so nearly pulled off its pitlane cut-through win

Lucas di Grassi and Audi were only denied an outrageous Formula E win at the second London E-Prix by a tiny wheel speed measurement that proved the Brazilian didn’t fully stop while attempting a controversial pitlane cut-through manoeuvre.

The Race understands that the FIA’s wheel speed sensors detected that di Grassi’s Audi e-tron FE06 was still travelling before he released his brake and hit the throttle to exit his pit and rejoin the race behind the safety car.

Audi had noticed before the London E-Prix meeting began that the delta time in cutting through the pitlane, an official part of the racetrack, could gain a significant advantage in a safety car period.

And… @LucasdiGrassi is in the lead? 😅

Di Grassi was positioned in eighth place when the safety car was deployed to recover Antonio Felix da Costa’s crashed car at Turn 1.

Audi team principal Allan McNish himself sanctioned the move for di Grassi to come through the pitlane and stop so that he could then rejoin in an attempt to gain position on the pack, whose pace was being dictated by the safety car.

The plan, which led to di Grassi just rejoining in the lead, worked “better than we actually expected” according to McNish, who also told The Race that “it was always considered to do it if fitted in to our strategies”.

Di Grassi then went on to execute his second attack mode and moved back into the race lead when he passed Nyck de Vries’ Mercedes into Turn 1.

Audi, and probably many other teams, have been eyeing up an opportunity to employ such a tactic all season. Ever since Mahindra and Nissan e.dams pioneered it in Berlin last year, teams have considered it. Audi executed it.

Why? Because it could.

The great irony is that you cannot employ the same method under a full course yellow because this was tightened up by the FIA after the little-reported Berlin incident last August.

“You look through the regulations and clearly last year in Berlin, it was flagged up that there was an area that needed to be tightened up, which was under a full course yellow in Germany,” added McNish. 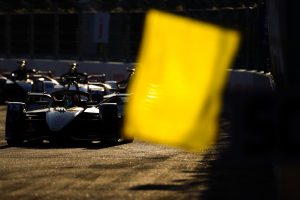 In terms of the benefit you could have by coming into the pitlane, stopping and going back out again, it was clear you’d make up a bunch of positions.

Even better if it was for an incident down at Turn 1, which this was, because the safety car would inevitably slow down there as snatch vehicles attempted to recover the stricken DS E-TENSE FE21.

“We’ve prepared for this scenario, but on this occasion, the safety car was super slow.

“It was quite clear that we could maybe take a few positions up but actually, it was a bit better than expected, very honestly, from a strategic point of view.”

The Race understands that Audi was among at least three teams that have practised such scenarios in simulations over recent races.

It could only have happened if the safety car was travelling slower than a full course yellow designated speed of 50km/h and at certain stages of the lap in which di Grassi pitted that was the case.

As acknowledged by McNish the plan worked remarkably well, apart from the fact that di Grassi didn’t come completely to a halt.

UNSEEN FOOTAGE!@Lucasdigrassi almost pulled off an audacious move after nipping through the pitlane to grab the lead during a safety car period.

But it was ruled he didn't come to a stop before exiting the pit and was black flagged for declining a drive-through penalty. pic.twitter.com/DeXEI11K0V

A designated observer is also positioned in the pits but it is believed that the official FIA data, which is provided by Magneti Marelli, proved categorically that di Grassi’s rear wheels were never not in motion.

“It’s kind of black and white in their view,” said McNish.

“Stopping clearly means ‘zero-zero’ in every area and that’s not what we were able to achieve with the rear wheel.”

Part of the reason for this was certainly the use of a standard flooring in the ExCeL pits, which was crucially not the epoxy-sand finish that made up the race surface.

Di Grassi told The Race that “we lost a very smart victory today” and that “it was a massive shame.”

“I stopped according to the rules and from my perspective the front wheels stopped rotating,” he said.

“But because this floor is extremely slippery I think the FIA probably understood that the car itself didn’t stop the wheels, but the car was still sliding a bit.

“That was the only reason why it was deemed illegal.

“But it was a great call from the team and very creative, obeying 100% the rules.”

McNish also explained his dramatic sprint down the back of the pitlane which was captured on the official TV feed.

“A drivethrough [penalty] cannot be appealed, so you can’t do anything about it, and like I said, we believed at that point the car was stopped,” said McNish.

It was at this point that the steward showed McNish the data that showed di Grassi had still been slightly in motion. Then di Grassi was given the black flag for failing to take the drivethrough.

Di Grassi didn’t take the drivethrough penalty because his Audi team deliberately didn’t inform the 2016/17 Formula E champion of the penalty – breaching the sporting regulations and earning the team a €50,000 fine.

Audi carved out a cute move that exploited another hole in Formula E’s regulations that now surely have to be tightened up so this incident doesn’t set a precedent for future incidents where teams could be as cunning and as clever as Audi.