Antonio Giovinazzi finally delivered a highlight in an otherwise miserable rookie Formula E season by qualifying third on the grid for the second race of the London double-header weekend.

Ex-Formula 1 driver Giovinazzi was yet to make it through to the duel phase of qualifying during his rookie Formula E season with Dragon Penske and had a best race finish of 16th at Monaco. 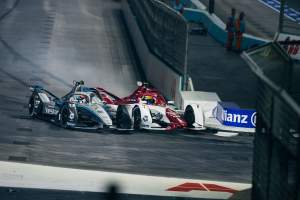 But he was able to follow up his team-mate Sergio Sette Camara’s starring Saturday role by breaking into the duels and beating reigning champion Nyck de Vries to claim his spot in the semi-finals.

He wasn’t able to overcome Venturi’s Lucas di Grassi in their duel but he was faster than the other semi-final loser Antonio Felix da Costa and thusly secured third place on the grid for Sunday’s race.

He’ll be hoping to avoid the fate of team-mate Sette Camara who was cruelly denied points on and was made “to look like a clown”.

Di Grassi was defeated in the final duel by Jake Dennis, who secured a brace of pole positions for the Avalanche Andretti team by smashing di Grassi’s error-strewn lap by 1.1s.

De Vries was the fastest of the quarter final losers and will line up in fifth place ahead of Sebastien Buemi (Nissan e.dams) and Nick Cassidy (Envision).

Dennis’ team-mate Oliver Askew hit the wall in his quarter-final duel and drops three further places on the grid to 11th for crossing the pit exit line.

Points leader Stoffel Vandoorne failed to make the duels but so did all of his championship rivals.

The Mercedes EQ driver took 13th on the grid while his nearest rival Mitch Evans (24 points adrift) will start alongside him on the seventh row.

Jean-Eric Vergne has fallen 45 points back but he’ll start as the highest-placed of the championship top four in ninth place following Askew’s penalty.

Fellow Mercedes-powered runner Edoardo Mortara, who is third in the points, is down in 17th place.