Jaguar’s Mitch Evans goes into the Formula E finale in a commanding position to snatch the championship after qualifying third in Berlin – six places clear of any of the other 12 title contenders.

Mercedes driver Stoffel Vandoorne and Nissan racer Oliver Rowland will share the front row, but both fell out of the title hunt in Saturday’s race.

Evans goes into the race fourth in the championship, only five points behind leader Nyck Vries – whose Mercedes is down in 13th.

Though the track evolution in qualifying on the reversed Berlin layout was not as brutal towards the early groups as is usually the case in Formula E, those running later still had an advantage and Evans’ group one lap only kept him in superpole by 0.005s and none of his title rivals made the cut.

Just 0.242s covered the six championship leaders in group one, but in an incredibly close qualifying session that was the difference between Evans reaching superpole and Robin Frijns being 21st on the grid.

Jake Dennis (currently third in the points) is the next best title contender behind Evans, with his BMW starting ninth behind Andre Lotterer and Sebastien Buemi. 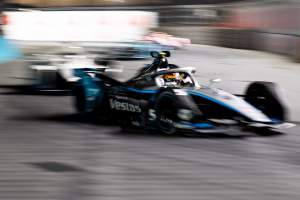 Pascal Wehrlein’s championship hopes are all but over as he is 24 points off the lead with 26 available from the race. His Porsche starts 10th ahead of second-in-the-championship Edoardo Mortara’s Venturi Mercedes.

Saturday front row duo Antonio Felix da Costa and Jean-Eric Vergne share the eighth row for DS Techeetah this time, while race one winner Lucas di Grassi‘s Audi is behind them in 17th.

Maximilian Guenther needed all four bonus points from qualifying to keep his remote title hopes alive. Instead he’ll start 18th and the championship fight is down to ‘only’ 13 drivers.

Four of the final six drivers on the grid are still in championship contention: Rene Rast in 19th, Frijns in 21st, Sam Bird in 22nd and Nick Cassidy in last place.

Tom Blomqvist did an extraordinary job to get his NIO333 into superpole and starts fifth. The team is in a compromised state this weekend due to personnel having to isolate after a positive COVID test result among them.

Venturi’s Norman Nato made it into superpole only for his Mercedes to fail to start for the pole shootout. He is still able to take up sixth on the grid.

Catch up with the Berlin opener
Thank you for your feedback!