Jake Dennis will get a second season of Formula E action in 2022 and his win in London last month helped make up Andretti’s mind to keep him.

His team-mate could be an American driver, with IndyCar racer Oliver Askew among those under consideration, if Andretti decides against retaining Maximilian Guenther.

Dennis, who also won at Valencia in April, recently agreed terms to drive for what will be a new-look Andretti entry next season.

This is because the team will run as a solo entity as last December BMW decided to withdraw its factory involvement in the world championship after the 2021 season.

His two victories mean he sits fourth in the standings heading into the title-deciding Berlin E-Prix double-header this weekend.

Andretti will maintain the use of BMW powertrains next season but will use its base in Banbury in the UK more for the operational running of its team. It will also continue to use the BMW driver-in-the-loop simulator in Germany.

Team principal Roger Griffiths said Dennis’s performances in London did influence the decision to re-sign him.

“I think that kind of sealed the deal really because it came in the middle of negotiations and he was excellent all weekend,” Griffiths told The Race in Berlin this morning.

Another key reason that Dennis has been re-signed is down to continuity with the already homologated BMW powertrain. 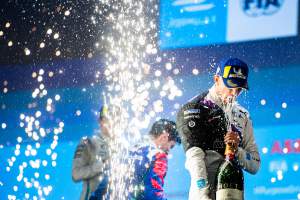 This, in addition to several staff changes and a complete restructuring of the teams make-up were, said Griffiths, “significant factors”.

“One of the things I was really persistent on in the discussions with the other members of Andretti Autosport was retaining knowledge of the BMW car,” said Griffiths.

“If we were to have a driver line-up that didn’t feature either of the current team members, it would be a huge challenge.

“So because some of the Andretti staff are changing as well, with new personnel coming in and replacing BMW engineers, if we didn’t have some continuity on the driving front it would be very tough.”

The situation over the seat next to Dennis is less clear but Maximilian Guenther is still in contention for what could be an unchanged line-up.

Griffiths stated that “no decision has been taken” and that “Max is under consideration but we’re also looking at other possible drivers to come in, whether it is US nationals or somebody else, not sure.

“So we’re not in such a hurry to confirm that.

“I don’t think you’ll see any announcements on that before the end of this month, and maybe later on.”

Andretti is understood to have been considering former IndyCar driver Oliver Askew recently.

Griffiths confirmed Askew is in a pool of drivers for the seat but the ultimate decision will come down to team owner Michael Andretti.

Askew won the 2019 Indy Lights title for Andretti before racing for the Arrow McLaren SP squad for most of 2020. 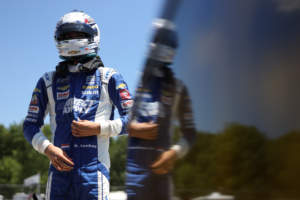 However, an accident at the Indianapolis 500 and subsequent concussion symptoms ended his campaign early, and he was dropped for 2021.

Earlier this year he stood in for an injured Felix Rosenqvist at AMSP and then also raced at Road America in a one-off event with Ed Carpenter Racing.

Andretti also has Kyle Kirkwood on its books.

The Race understands that the current Indy Lights points leader, who tested its FE car last year, is highly unlikely to be chosen for the seat. If he wins the Lights title, he will have scholarship money to take to an IndyCar programme.

But Askew could be drafted in for Formula E depending on the commercial element of the team.

“His name has come up and Michael is very keen to have an American in the team,” said Griffiths.

“He’s somebody that we know because he won the lights championship with us.

“We believe he’s very quick and an IndyCar he had a bit of misfortune last year.”