Though there were times when de Vries was under moderate pressure from Porsche’s Pascal Wehrlein or Audi’s Rene Rast, he was able to make crucial rapid breaks both in the opening laps and on the restarts from the race’s two safety car periods and ultimately won by a comfortable four seconds. 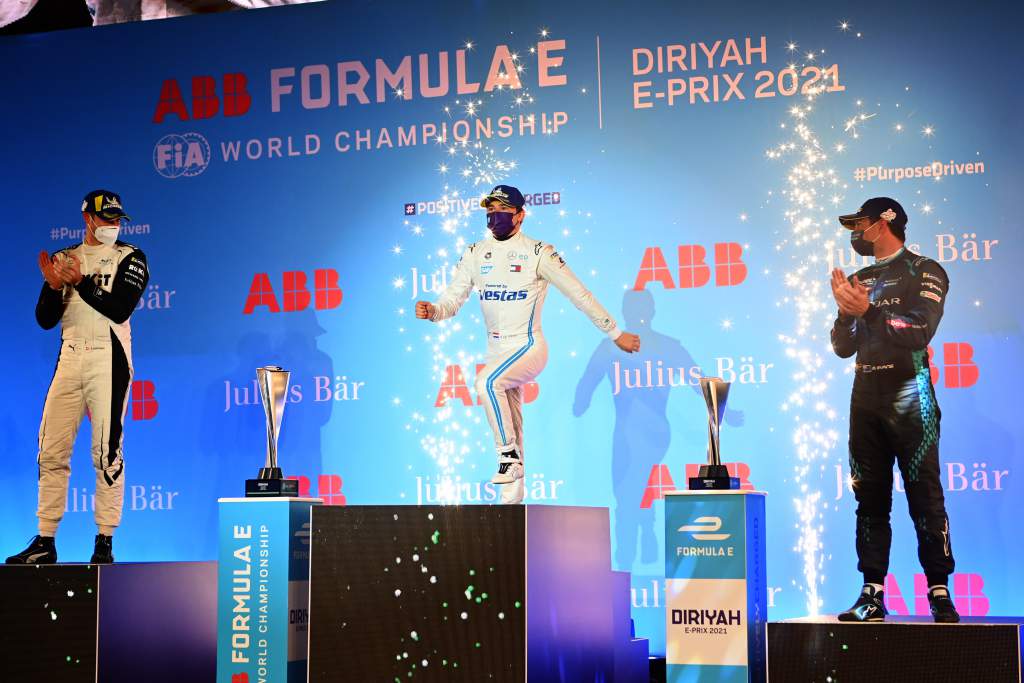 Mercedes therefore starts the 2021 season in the same commanding way it had ended the 2019/20 campaign in Berlin, where it won last August’s finale with Stoffel Vandoorne.

Edoardo Mortara made it a Mercedes 1-2 with a battling drive for its customer team Venturi.

Mortara set up that result by overtaking Wehrlein and Mitch Evans’ Jaguar in a sublime two-at-once move in which he zig-zagged diagonally through a narrowing gap between them when using attack mode.

That placed him third and he later outfoxed Rast during the attack mode deployments, with Evans demoting the Audi off the podium soon afterwards.

OH NO! Former teammates @sambirdofficial and @alexlynnracing collide in Diriyah 😦

The second Jaguar of Sam Bird was involved in the first of the safety car prompting shunts, ending up entangled with Alex Lynn’s Mahindra as they fought over sixth.

Maximilian Guenther caused the second safety car with 11 minutes to go when he heavily smacked the wall in his BMW.

This is the moment where @maxg_official slides off the racing line and into the barriers, bringing his race to an end and gives us another Safety Car…

Wehrlein fended off aggressive late attacks from Oliver Rowland’s Nissan to take fifth on his Porsche debut, chased by Alexander Sims and Vandoorne.

The other Porsche of Andre Lotterer was in top six contention before having to pit to replace a punctured tyre. He finished 16th.

Lucas di Grassi progressed from 16th on the grid to ninth, while behind him Oliver Turvey ended NIO333’s long points drought with 10th.

Reigning champion Antonio Felix da Costa could only make it as far as 11th after qualifying down in 18th. His DS Techeetah team-mate Jean-Eric Vergne was 15th.