Bird won the second race of the season in Diriyah and finished on the podium in the following race in Rome but hadn’t returned to the podium since then prior to the weekend.

His “rollercoaster” Saturday featured a crash in practice, a collision with Oliver Rowland in qualifying and then s charge to ninth place in the race. 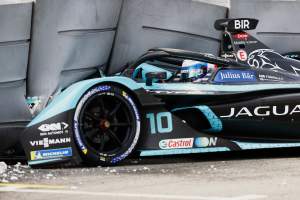 On Sunday, he claimed his first pole with Jaguar and converted that into a comfortable victory on the streets of the American city.

The 25 points for victory skyrocket Bird into the lead of the drivers’ championship from ninth place – and he had been down in 13th at the start of the day before getting the bonus points for pole.

Bird’s team-mate Mitch Evans was on course to complete a 1-2 for Jaguar until he suddenly slid wide on the exit of the Turn 4/5 left-hander and dropped down to fifth place with two minutes remaining. Evans told the team by radio that he had damaged the car. Had he remained in second place he would have moved up to second in the points standings.

This allowed Nick Cassidy to claim second place to match his best result of his rookie season with Envision Virgin. He fended off pressure from defending champion Antonio Felix da Costa of DS Techeetah, who earns his first podium finish since his spectacular Monaco win.

Pascal Wehrlein was the lead Porsche driver over the line in fourth place ahead of team-mate Andre Lotterer.

Alexander Sims finished in a distant sixth place for Mahindra while Dragon Penske’s Sergio Sette Camara earned his first points finish since the second race of the season, with a solid run to seventh place from fifth on the grid.

The latest chapter in Lucas di Grassi and Sebastien Buemi’s long-standing rivalry produced another collision between the duo, who also came together earlier in the season in Rome. 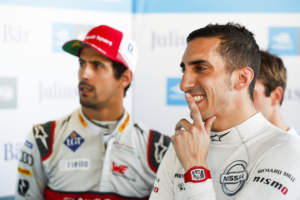 Di Grassi attacked Buemi’s ninth place on the inside of the Turn 6 chicane and Buemi was sent into a spin while di Grassi continued.

However, the stewards slapped di Grassi with a 10 second penalty and the 2016/17 champion dropped from ninth at the chequered flag to 14th position – one place ahead of Buemi.

Di Grassi’s penalty promoted Venturi’s Norman Nato into seventh place – his second points finish of the season despite having a part of a rival’s diffuser lodged in the front of his Mercedes for the majority of the race.

Robin Frijns was tied at the top of the drivers’ championship heading into the race, and he added four points to his tally with a late-race pass on the second Mahindra of Alex Lynn, who was ninth.

Race one victor Maximilian Guenther started on the back row of the grid and nicked the final point for BMW Andretti.

Outgoing championship leader Edoardo Mortara found himself in the barriers at the Turn 6/7 chicane after contact with the BMW Andretti of Jake Dennis.

The championship leader is in the barrier! 😱

He gets going again but is now running P21…

Mortara rejoined the race but finished well down the order in 17th place.

Jean-Eric Vergne’s miserable day continued. He lost power in qualifying and couldn’t set a lap and in the race, the two-time FE champion couldn’t even get off the line.