Hamilton was coasting out front in the opening stages of the Monza race when the Haas of Kevin Magnussen triggered a safety car period by stopping at the approach to the pitlane, with the championship leader using it to make a pitstop.

However, Hamilton – along with Alfa Romeo’s Antonio Giovinazzi – entered the pits when they had been closed due to the position of the Haas, which resulted in a severe 10-second stop-and-go penalty. 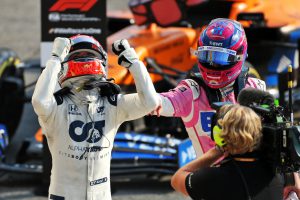 Hamilton served it after a post-red-flag restart and would recover to seventh at the finish, minimising his losses in the points standings, but was clearly dismayed and confused by the situation.

“It was a weird sequence of events, I must say that,” Wolff said after the race.

“Maybe we could have spotted [the pitlane entry was closed] earlier. But the decisions that were taken were highly unusual, but they were absolutely within the rules.

“So what happened is that one of the Haases was parked to the right, almost near the entry, behind the rail on the inside of Parabolica, and there was a single yellow [flag].

“But it [the panel] wasn’t exactly red, it was two yellow crosses on the outside, and no light on inside. And we spotted that last-minute at home.

“One of the strategists just shouted into the radio whilst we were entering the pitlane.

“And there was confusion, because you prepare yourself for the pitstop to make it good, everybody on the pitlane including myself, we were looking at this situation.

“Nobody looks at page four [the race control messages] that the pitlane is closed, we can’t see the signs and this is just a sequence of events that screwed Lewis’s race.

“Not happy but you have to take it on the chin.” 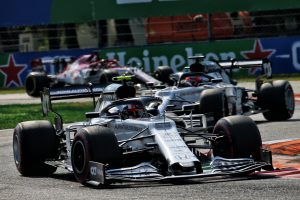 Was Monza 2020 the best race of F1’s hybrid era? Our verdict
Read more

Asked by The Race to clarify whether Mercedes was unaware what the yellow crosses meant, Wolff said: “There was no pitlane light at all. And obviously from the pitwall you can’t see these yellow crosses.

“And if the driver doesn’t spot them, the only way you can see that the pitlane was closed was on page four of the FIA communication system, and nobody looks at that page when a safety car is deployed and the driver is just about to come into the pits.

“Everything is concentrated around the pitstop. So, unlucky I would say, and a very unusual decision to just close the pitlane.”

The closure of the pitlane entry seemed to be motivated by the need to push Magnussen’s stricken Haas into the pits.

Hamilton was seen going in to talk to FIA race director Michael Masi during the red flag stoppage for Charles Leclerc’s barrier-destroying accident.

“We discussed it because he said he didn’t see it,” Wolff explained.

“Which is certainly true, he [Hamilton] would never say something that wasn’t true.

“Those yellow crosses were on the outside of the corner. Nothing on the inside, no red light on the pitlane entry and this is why he went to see Michael and told him, ‘I didn’t see it’.”

Hamilton suggested after the race that the error was more down to him than the team.

“Honestly I didn’t see those boards, so I take responsibility for that. Something I will learn from,” he told Sky Sports F1.