Verstappen was among a number of drivers to improve on his qualifying position and thusly his starting position for Sunday’s race.

However, some drivers weren’t as lucky and have compromised their grand prix starting positions with mistakes in the sprint race.

Our writers assess the winners and losers from the first 17-lap Silverstone sprint race.

The biggest winner of F1’s first sprint has to be Verstappen. Having controlled the title fight in recent races, he was usurped by Hamilton in Friday evening qualifying yesterday.

The best way possible to respond was to storm past Hamilton with the perfect getaway off the line, place his car perfectly on the opening lap to hold the lead, and then dominate the 100km race thereafter – and that’s exactly what the Red Bull driver was able to do.

Verstappen will still have a tough task on Sunday and must avoid Hamilton getting his revenge with an opening pass of his own tomorrow but he has a brilliant chance of extending his championship lead even further and delivering a bruising blow for Hamilton on his home soil. – Josh Suttill

Though Leclerc is the kind of driver you might expect to make up ground with a sprint charge, qualifying fourth already meant he didn’t have much scope to – nor did he need to in the context of who Ferrari is fighting with.

Valtteri Bottas’s tyres crumbling and opening the door for a Leclerc podium, or the Ferrari making an amazing first lap and getting among the title contenders for a bit, would’ve been the only way it might’ve been better.

Leclerc comes away today with fourth on the grid easily preserved, and now going into Sunday without the second Red Bull right on his tail. That’s a result. – Matt Beer

Alonso’s glorious progress from 11th on the grid to fifth by the end of the first sector was partly due to having a set of fresh softs and partly due to his wonderful racing imagination.

He was a great advert for what the sprint is all about: throwing caution to the wind and trying to put a slower car further up the grid for Sunday.

The fact Alonso shipped 19s to Lando Norris in 12 laps after being overtaken underlined the pace deficit the Alpine driver was grappling with. The fact he still finished seventh underlined how brilliant this drive was.

With both its cars taking this strategy, Alpine deserves credit for making something happen, and it got Esteban Ocon up from 13th to 10th (ninth after George Russell’s penalty) too.

But really this was all about Alonso giving the best reminder yet of why it’s so wonderful to have him back in F1. – MB

Along with the Alpines, Raikkonen was a fellow beneficiary of the bold soft-tyre call, banking on enhanced opening-lap performance being more valuable than long-run pace.

The gamble paid off. Raikkonen’s prodigious start record meant he would’ve probably gained positions off the line either way, but the effect of the softs in the initial launch was clear from his onboard.

Having already moved up, he then stayed impressively undeterred by Carlos Sainz’s return to the track nearly spearing him off, and used the softs’ still-superior grip to pick Lance Stroll’s pocket into Copse.

Honestly, I am not sure he should keep the position – Stroll’s retaliation attempt through Maggotts and Becketts was met with what can charitably be described as a ‘robust’ defence, leading to minor contact, and Raikkonen then made a mockery of track limits in defending at Stowe.

But with no investigation opened, it looks like the Finn got away with it – and a four-place improvement for Sunday is ultimately fine work. – Valentin Khorounzhiy

Mercedes’ tactic of splitting tyre compounds looked perfectly poised to ensure a sprint race win. Looking at what happened to the Alpines and Raikkonen, Bottas should’ve either led the opening lap, or at least slotted in between Hamilton and Verstappen, giving his title-contending team-mate a buffer. 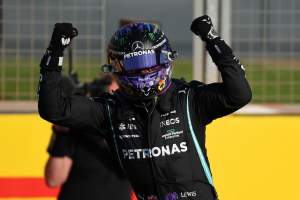 Obviously, it fell apart immediately. And though there’s probably not much to be read into the fact that Hamilton was subsequently unable to get past Verstappen (as passing beyond the opening lap looked problematic even for those with a tyre offset), it’ll sting to have allowed the Dutchman to add another point to his gap following Friday’s morale-boosting ‘non-pole’.

The good news is, Verstappen’s pace and tyres didn’t look bulletproof (obviously neither did Hamilton’s) and Mercedes will at least get another chance at outfoxing him on an opening lap.

The bad news is, Verstappen seems to have a better handle on starts this year than ever before. – VK

If you thought that trailing Verstappen by seven tenths in Friday qualifying was a terrible response to a really poor error-strewn Styrian GP, today showed you ain’t seen nothing yet.

The Mexican qualified in fifth place on Friday but then slipped in between the McLarens and behind Alonso on the opening lap.

While trying to recover he spun on the entry to the Hangar Straight and did well to not connect his Red Bull with the wall. He then retired from 18th place due to “vibrations” – although his team boss Christian Horner told Channel 4 that the retirement was “tactical” after the race.

Perez has built up a lot of goodwill in being a near-instant upgrade on Pierre Gasly and Alex Albon, but he’s hitting a bad patch of form, and the timing couldn’t be much worse given there’s still no 2022 deal in place. – VK

Sainz deserves credit for his comeback charge from 17th to 11th, and having only qualified ninth on Friday anyway it’s not like he’s lost a brilliant grid spot due to the events of the sprint.

But his tone on the radio post-race showed how negatively he felt about his Saturday.

Unhappy with the startline performance of the Ferrari, but particularly enraged with the eventually-penalised Russell over the contact, the quality of the recovery drive was zero comfort to a man who now starts the main event six places behind a team-mate who has a podium shot. – MB

He lost control of his Haas into the Village right-hander and slammed into Mick Schumacher. Mazepin continued but finished as the last car running in 19th place – and he’ll face a post-race investigation.

The duo’s first major on-track contact with each other has arguably been a long time coming after they almost had a last lap aeroplane crash in Baku.

Although he’s not lost anything with this error, the repair bill for the broken parts will be most unwelcome at Haas. – JS

The star of Friday qualifying held his own in Saturday’s sprint race to cross the line in ninth place, but an opening lap collision with Sainz’s Ferrari ruined most of that hard work.

Russell lost eighth place to a charging Fernando Alonso on the opening lap and Sainz tried to attack him around the outside of the Brooklands left-hander, only for Russell to lock up, understeer wide and collect Sainz.

Russell was largely unaffected by the incident and would have started tomorrow’s grand prix from inside the points-paying positions had the stewards not slapped him with a three-place grid penalty for causing a collision, dropping him to 12th.

Regardless of whether you think it’s a fair penalty – Russell thought it was a racing incident while Sainz was adamant it required punishment – it has cost Russell his third successive top-10 start, and compromised another great chance for him to end Williams’ 36-race pointless streak. – JS