Max Verstappen and Red Bull got their title challenge back on track with a convincing victory in front of the partisan crowd at the Dutch GP, although Lewis Hamilton and Mercedes did at least succeed in making it a race.

Verstappen is (spoilers) an expected presence in the ‘winners’ section in our regular column, and he is joined by a driver many believe should’ve been picked as his 2022 team-mate – while it was a particularly painful weekend for two teams lower down the grid in terms of their constructors’ battles.

The championship lead returns to Max Verstappen after back-to-back collisions at Silverstone and Budapest negated his sublime domination of the triple-header.

He crucially held his lead into the opening turn and drove a measured race, thereafter, pumping in the quick laps when it mattered and never allowing Hamilton to get close enough to pounce or undercut.

A home victory is a win that Verstappen will likely never forget, but more important is that it gets his title hunt back on track after a couple of incidents that he can’t take much blame for.

Red Bull seemingly had a slight advantage over Mercedes this weekend, but then again, Verstappen’s team-mate Sergio Perez never even got close – even compared to recent standards. – Josh Suttill

For a second-best result of his team’s season so far, it was a shockingly straightforward run to fourth place for Gasly, especially given the minimal attrition. 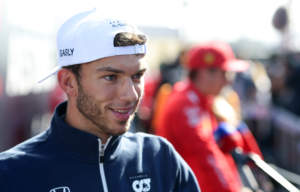 He put some distance between himself and the Ferraris early on, and tackled a long second (and final) stint on the mediums with minimal fuss, never allowing Charles Leclerc within anywhere near striking distance.

Considering it capped off a weekend in which he thoroughly obliterated rookie team-mate Yuki Tsunoda once again, it left an extremely positive impression of the level Gasly’s currently operating on. – Valentin Khorounzhiy

This was a great result for Alpine, getting two cars in the points and splitting the Ferraris thanks to Fernando Alonso’s persistence and final-lap pass on Carlos Sainz.

It was vital that Alpine execute a good race with Pierre Gasly starting fourth and poised to bring home decent points for Alpine’s nearest rival in the championship AlphaTauri.

That almost went belly-up within a few seconds of the start as Alonso and team-mate Esteban Ocon got way too close for comfort on the run to Turn 2 and even made contact.

But they avoided anything race-ending and Alonso won track position at the next corner, sweeping around the outside of the banked Turn 3.

It was a long, long race from then on but one that rewarded the team very well indeed. – Scott Mitchell

No Friday practice, no regular mileage in the car, no prior experience of the track in its current state.

Kubica was never going to score points here, but a top-15 finish is well worthy of a recognition, considering he produced competitive pace and kept his nose clean throughout. He’s clearly a solid reserve to have. – VK

Mercedes had no answer for the pace of Verstappen, no matter what strategy it threw at the home hero.

Valtteri Bottas was unable to make Verstappen’s difficult at the first round of pitstops, having to avoid the spun Sebastian Vettel.

Mercedes then had to order Bottas to slow down while he was on his fastest lap attempt, and it brought Hamilton in with two laps to go to salvage the bonus point and ensure Verstappen’s lead is three rather than four points.

It was smart strategical thinking and it’s debatable whether more of that thinking would have helped earlier in the race – or if Mercedes was simply too slow. – JS

Perez started from the pitlane after his embarrassing Q1 exit and he struggled to get past Nikita Mazepin’s Haas early on.

He locked his brakes and badly flat-spotted his hard tyres, but did recover to charge through to eighth place, passing Ocon’s Alpine late on.

However, four points on a weekend his team-mate dominated the race is not good enough – and it feels particularly poignant on the same weekend as one of Gasly’s strongest performances. – JS

A race to forget for McLaren, which has lost third place in the constructors’ championship and just had a horrible Sunday in which both cars looked completely stuck.

Lando Norris did well enough to retrieve a top-10 finish given his Q2 exit and the lack of retirements ahead although what befell Daniel Ricciardo and prompted his poor pace is unclear.

With Ferrari so comfortable in the top six (well, until the very end at least…) this was a damaging one for McLaren and a great one championship-wise for the Scuderia.

Where there will be cause for concern at Ferrari is in Carlos Sainz’s slump. He was quite close to Leclerc most of the race before falling back dramatically in the final part of the grand prix.

What should have been fifth and sixth became fifth and seventh after Alonso’s last-lap move on Sainz. – SM

Just a total bummer for the Italian, whose reputation for failing to capitalise on decent grid positions is likely to be added to here – even though he really didn’t seem to do all that much wrong.

Giovinazzi can count himself unfortunate to have been rather harshly chopped by Sainz through Turn 5 on the opening lap, and doubly unfortunate to be caught up behind Alonso’s subsequent Turn 6 wobble as a result. Without that sequence of events, he would’ve ended the first lap seventh rather than tenth.

But it may not have mattered, given the race was effectively undone by a puncture forcing a second pitstop shortly after the first. – VK

It’s easy to be critical of/glib about Vettel’s latest addition to his gallery of spins, but the fact is there was very little to lose in attempting a bonkers Hugenholtz manoeuvre given where he was running. But where he was running was a direct consequence of qualifying – and even before that run-in with the Haas cars, Vettel was not on pace to make it out of Q1.

Ultimately, it’s just the latest race in a stretch that makes for seriously grim reading for Aston Martin. In the last seven races, the team’s added just 16 points to its tally, and both Alpine and AlphaTauri now look increasingly out of reach. – VK