Williams CEO Jost Capito has indicated that Nico Hulkenberg is among the drivers on the team’s long list of potential candidates for a 2022 Formula 1 drive.

Capito was asked if Hulkenberg was a candidate should the team need to change its line-up next year and did not rule him out, suggesting that he’s among a large group of drivers who are under consideration.

The Race understands that Hulkenberg is seen as a viable option for Williams, but that the team is casting the net wide to ensure it has the best available lead driver next year.

There a strong possibility with George Russell is potentially on his way to Mercedes and team-mate Nicholas Latifi yet to be confirmed for next year that Williams could need to make at least one change to its line-up, although Latifi is well-backed and could well stay on.

While Capito has offered little to go on there, it makes sense for him not to rule out an experienced, proven driver like Hulkenberg who would have a lot to offer the team.

It is true that there are multiple drivers in consideration and this does not mean Hulkenberg is at the top of the list. Should Russell move to Mercedes, the driver he replaces, Valtteri Bottas, could prove to be the strongest candidate for a team that is in the process of rebuilding.

Alpine reserve Daniil Kvyat is also understood to be a contender given the need for Williams to have an experienced driver should it need to replace Russell as its de facto leader.

But it is logical to have Hulkenberg, who is currently on Aston Martin’s books as reserve driver, among the candidates given his strong track record in F1. 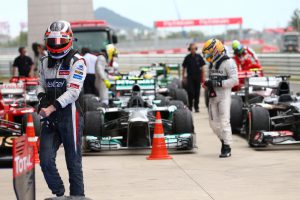 Hulkenberg was Mercedes’ ‘next choice’ after Hamilton
Read more

There are relatively few available drivers with significant F1 experience on the market, but Williams is understood to be open to signing whichever it feels offers the best performance level.

Despite being most famous for his record of 179 starts without a podium finish, the 33-year does have a strong record in F1 even though he has fallen short of the high expectations established following a stellar junior career and promising early years in F1.

He also knows the team, albeit from more than a decade ago, having raced for it 2010 after initially signing as a test driver in December 2007.

Following a shaky start, Hulkenberg compared well to experienced team-mate Rubens Barrichello during the second half of the 2010 season. He also took a shock pole position in the Brazilian Grand Prix, excelling in damp conditions in Q3 to set two lap times good enough for top spot.

Hulkenberg was dropped by Williams for 2011 to accommodate GP2 champion Pastor Maldonado, who brought substantial backing from Venezuelan oil and gas giant PDVSA.

He moved to Force India as third driver before landing a full-time seat there in 2012. After a year with Sauber in 2013, he returned to Force India for two more years before switching to Renault.

Last year, he had three outings as a stand-in at Racing Point, finishing eighth in the Eifel Grand Prix at the Nurburgring after being thrown into action only at the start of qualifying in place of Lance Stroll.