Williams has shaken down its 2021 Formula 1 car – the Williams FW43B – at Silverstone today ahead of its launch in early March.

Both George Russell and Nicholas Latifi are understood to have driven the car in wet conditions, making Williams the second team after McLaren to run its 2021 machine.

Williams has not released any images of the car, which will not be launched or decked in its real livery until March 5, but has released a teaser video on social media showing Latifi watching the car on track from the pitwall. 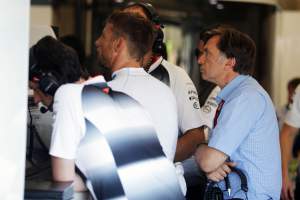 The shakedown is being conducted on one of Williams’s two permitted promotional days, which are limited to 100km of running using Pirelli demo tyres.

This is the first new car to have run since Dorilton Capital took over the ownership of the team last year, as well as the first under new chief executive officer Jost Capito, who started work with Williams earlier this month.

While expectations for this year are very much in check given the carryover car and the fact Williams finished last in the championship in both 2019 and ’20, it is hoped that progress can be made as it takes its first step towards the long-term goal of re-emerging as a race-winning team.

“I’m confident we will make a step forward next year,” Latifi told The Race in December last year.

“Realistically, I don’t think we’re going to make as big a step as we did from 2019 to 2020, simply because of the nature of the car carrying over to next year, and obviously so much will change.

“I’m quite looking forward to seeing where we can get to. I feel like always the development is never as quick as you want it to be and I’m sure every team wants the lap time to come quicker, but we can make step forwards.”

McLaren is due to run the MCL35M that it launched on Monday for a second time at Silverstone tomorrow, with AlphaTauri the next team scheduled to launch its car on Friday.