Why Williams picked a rally specialist to be F1 tech chief

New signing Francois-Xavier Demaison was the first choice for Williams CEO Jost Capito as technical director of the Formula 1 team despite the vast majority of his motorsport experience being in rallying.

Former Volkswagen Motorsport boss Capito worked closely with Demaison on the all-conquering VW World Rally Championship programme, meaning “he was always top of the list” to bring in to steer the Williams team’s hoped-for climb back up the Formula 1 grid.

Demaison is available to work at Williams from the start of April and Capito has no doubts he can translate his effectiveness as technical director with Volkswagen into F1, especially given the depth of F1 experience already in the company.

“I’ve known him for a while, I worked very successfully with him, I fully trust him and I’ve seen his engineering capabilities that are fantastic,” Capito tells The Race.

“He is one of the best engineers I’ve ever met. He is a workaholic, he works day and night, he is keen on taking decisions.

“We have a lot of Formula 1 engineering know-how here in the team and we have huge talents and I don’t think it’s necessary to have somebody in who changes all that and goes in different directions.

While those skills were all showcased in rallying, Capito also cites two other areas where Demaison’s experience can have an impact at Williams that are rooted in the recent Volkswagen I.D.R project.

This is an electric car that set a series of records at various venues, notably the Nurburgring Nordschleife and Pikes Peak. This gave him experience of electric vehicles and simulation technology, as well as the ground effect aerodynamics that will have a far bigger role in F1 in 2022.

“There are two other reasons,” says Capito of the reasons Demaison was first choice. “They did the I.D.R recently and that was done from project approval to Pikes Peak in six months.

“You can’t practice upfront the whole track, so that needed a huge simulation [project], and they did their own batteries and so on. So the car was completely simulated before it was built. That’s a way where Formula 1 can improve still.

“So bringing somebody in who has huge experience on simulation and has recent experience of the latest technology on ground effect cars adds some skills and experience to the team that is not there in that way.”

While Demaison will attend some races this year as technical director, his primary focus will be on the all-important 2022 car – pictured below using a Williams mock-up from when the rules were first announced.

Next year’s cars will be built to completely different regulations, with the major design project already well under way for all 10 teams. Given Williams’s recent struggles, these new rules combined with financial changes such as the cost cap and more equitable distribution of the F1 revenue shared by the teams – on top of the investment from the team’s new owner Dorilton Capital – make 2022 the logical priority.

“That must be his major focus,” says Capito. “If there is something needed on the ’21 car that is obvious and we can improve, then of course, we will do that and he will be in charge of that as well.

“They were reliable and they were phenomenally light and had a fantastic centre of gravity. This car was absolutely fantastic and these are exactly the skills you need for Formula 1″ :: Jost Capito

Capito’s point about Demaison’s aerodynamic experience is a valid one. In F1, aerodynamics remain the key performance differentiator but Demaison also has plenty of experience in this area.

In 2017, a new World Rally Championship rules cycle put more emphasis on, and allowed more freedom in, aerodynamics than ever before with larger rear spoilers, diffusers and winglets adorning the series’ fastest-ever cars.

The 2017 VW Polo R WRC – which was designed but never competed after Volkswagen pulled out following the company’s ‘dieselgate’ scandal – required a huge aero development push under Demaison as technical director.

Capito has no doubts that Demaison has the grounding in aerodynamics, reliability and understanding the whole concept of a car required for F1.

“If you have to make the aero and go to Finland so that the car jumps properly for more than 50 metres, that’s a huge challenge to make it not land on the nose,” says Capito of Demaison’s aerodynamic expertise.

“They were reliable and they were phenomenally light and had a fantastic centre of gravity. So, from the whole concept, this car was absolutely fantastic and these are exactly the skills you need for Formula 1.”

Capito does not see the step from heading up VW Motorsport as technical director into an F1 team as a major one. While the VW team was smaller, Capito stresses this was more down to the relative lack of in-house production than a significant difference in design and development resources.

While Williams will take a supply of Mercedes gearboxes and hydraulics next year rather than producing its own, the majority of the car will both be designed and built at its Grove base.

With the strong existing technical structure already in place, Demaison’s task will be to bring his skills as a manager into ensuring the key topline decisions are made, something he already has plenty of experience as. 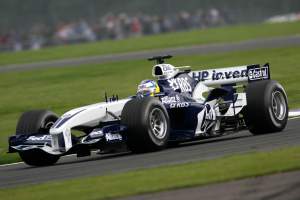 Can Williams be an F1 works team again – and when?
Read more

“It’s bigger, but it has the same functions,” says Capito of the differences between Williams and VW Motorsport.

“That’s why the team is smaller, because you don’t have the production side. But that means higher discipline on designing because external companies have to produce and build what you design.

“If you look at the people who were overall involved in a rally programme, I don’t think it’s less than you have in Formula 1, including the production side.”

Capito makes a compelling case for Demaison as the ideal candidate for the task. And while he stresses he was his first choice, it was also always likely Williams would have to look outside the box in appointing a technical director given the lack of easily-available F1-experienced candidates.

But it also reflects the support that Dorilton Capital has given to Capito in shaping the team in the way he believes is correct, which is essential if the hoped-for revival is to be a success.

Given the Mercedes-esque success VW had in rallying from 2013-2016, winning all three available titles each season and taking 43 event wins out of 52, it’s hard to argue with any of Capito’s rationale for recreating this partnership in F1.

And while Demaison’s F1 experience is extremely limited, his professionalism and engineering experience – as well as a good reputation for building strong relationships with co-workers – means he will head into his new job with every chance of making a success of it.

He may not be an F1 specialist – yet – but he has the skillset demanded of the technical director of a grand prix team and the capacity to learn very quickly.

As Capito puts it: “I’m sure when he is here the first day, he’ll know the rules in every single detail. That’s the way he works”.