The FIA will be monitoring every Formula 1 car’s rear wing for excessing flexing at this weekend’s Azerbaijan Grand Prix, where the threat of a protest remains real.

F1’s governing body informed teams prior to the previous round in Monaco that increased load tests would soon be incorporated amid concerns the rear wings on some cars, including the championship-leading Red Bull, were deforming too much on-track.

The new tests will only be enforced from the French Grand Prix onwards, so rear wings that might fail under these increased loads could continue to be used in Azerbaijan this weekend and still satisfy that specific part of the rules (Article 3.9 in the technical regulations). 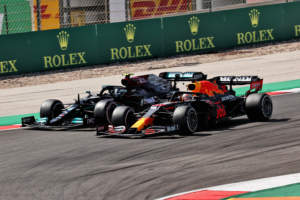 Teams get flexi-wing ‘clarification’ but will it stop protest?
Read more

McLaren and Mercedes were very unhappy at the delayed introduction of those tests but they also feel the load tests only satisfy part of the regulations, and that previous footage of some rear wings bending excessively on track was evidence they breached Article 3.8, which governs car parts with aerodynamic influence.

The flexi-wings are a seriously controversial topic in Baku because there will be a greater advantage in having a rear wing that bends to a lower angle on the long straights then snaps back into shape for the corners.

McLaren and Mercedes did not understand why the FIA has identified the wings like that of the Red Bull as potentially deflecting excessively, but effectively permitted their use in the interim.

The FIA did indicate they would begin to use video footage to monitor anomalous deflection on-track though, to help with the policing of Article 3.8 independent of the beefed-up load tests that govern Article 3.9, and that has been brought forward to this weekend in Baku.

Coloured dots (see below) have been added to the rear wings which will give the FIA a reference point to monitor how much they move.

McLaren team principal Andreas Seidl said that any deflection as severe as that seen in video footage of some cars at the Spanish GP should merit action but added the FIA has not communicated to the team what its definition of excessive deflection will be.

Seidl also suggested the FIA should be scrutinising whether teams have designs that are deliberately circumventing the rules.

“That’s a question you have to ask the FIA,” he said when asked by The Race. 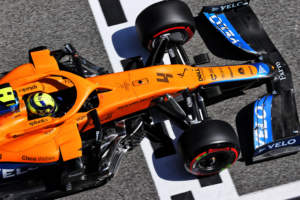 Mark Hughes: Why F1 may have another shock contender in Baku
Read more

“We didn’t get any further definition in detail of what they judge as acceptable for here or not.

“If this deflection gets created by a design that is clearly done for a single test which is in the regulations but creating excessive deflection on purpose that’s obviously not within 3.8.”

McLaren and Mercedes are believed to be unchanged in their positions by the updated FIA technical directive, so retain their Monaco stance that the door is open to a protest.

A protest in Baku would effectively ask the stewards whether they believe there is sufficient evidence of the behaviour of the wings on-track to consider them illegal regardless of the situation around the load tests.

The dots added to the rear wings should help with this as it at least provides a reference for comparing deflections across teams, which may establish what is considered ‘normal’ and what is too much.

Seidl would not confirm whether McLaren will lodge a protest should flexi-wings be used this weekend.

But he did say that if a protest were to occur, it would make more sense to do it after qualifying or the race.

“I don’t want to go into discussion of a protest at the moment,” Seidl said.

“In general, it doesn’t make sense to do anything before the event, because you can change your event on Saturday morning.

“There’s no point in doing anything on a Friday night.”