Why Ricciardo had to do his Dutch GP start wrong-handed

Daniel Ricciardo feared his Dutch Grand Prix was over before it began thanks to a gearbox problem that was actually a clutch paddle issue that forced him to switch to what the McLaren Formula 1 team called a “left-hand launch”.

Ricciardo, who started 10th, completed the practice start and formation lap as normal but when he pulled into his grid slot for the start proper, he could not engage first gear. 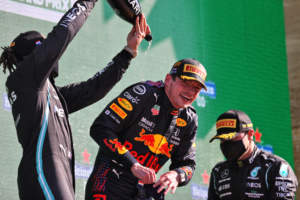 Did Mercedes squander a shot at Dutch GP win? Our verdict
Read more

He reported over the radio that “I can’t get first gear, it went into anti-stall” and also waved to warn the race starter that he had a problem.

However, race engineer Tom Stallard replied with “left-hand launch, left-hand launch” indicating Ricciardo should use the clutch paddle on the other side of the steering wheel.

“We have two clutch paddles, you have your preferred one and if you are right-handed you would probably choose the right-hand one for the start,” said Ricciardo. “That one chose not to work.

“I was on the grid stressing because it was not engaging, so I thought I had a gearbox problem. I was waving my hands and thinking I would have to get pulled off the grid.

“I tried the left one and it worked, so I’m trying to figure out how to do a start with my left hand.”

Although drivers do occasionally do use the paddle on the opposite side, usually they default to their favoured one.

“I gained a position on lap one when I thought I was going to lose many, so that was fun.” :: Daniel Ricciardo

Ricciardo admitted that he should perhaps practice more left-hand launches in the future, even though he adapted well to it in the moment. 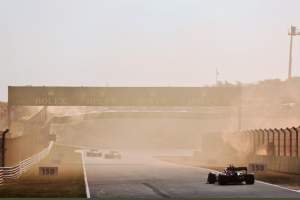 “I should,” said Ricciardo when asked by The Race if he ever practised starts using the left-hand clutch paddle.

“In Monaco, you are forced to do it exiting the pits because you are turning the other way and it is easier with your left hand to turn the wheel.

“I will practice it a few times.”

Ricciardo’s launch went surprisingly well, although the fast-starting George Russell jumped ahead of him quickly.

Aston Martin driver Lance Stroll also passed Ricciardo on the outside of Turn 1, before Ricciardo managed to repass both through Turn 2/3. He then passed Alfa Romeo driver Antonio Giovinazzi to end the lap in ninth having gained a place.

“As expected, Russell got me straight away but actually I managed to get him back, and then Giovinazzi as well in Turn 7,” said Ricciardo. 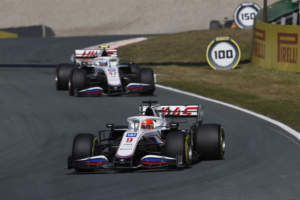 “I gained a position on lap one when I thought I was going to lose many, so that was fun.”

Despite holding ninth place in the first stint, Ricciardo ended the race just outside the points in 11th place having been passed by team-mate Lando Norris and Red Bull driver Sergio Perez, who started from the pits.

Norris overtook Ricciardo on lap 45 just after his sole pitstop having run 13 laps longer in his first stint. This was a result of the team ordering him to let Norris pass, the hope was that both would be able to chase down the Alpine drivers ahead. Ricciardo raised no objections and complied with the order.

He was also asked to hold up Perez for as long as possible later in the race, but was only briefly able to keep the Red bull driver behind.

“With Perez, I tried to hold on but he was quick. In hindsight, I could’ve probably run him off the track, but it was a matter of time until he got around.

“We tried a strategy to help the team and Lando but I don’t think it worked. We will try and analyse that now and see what we could’ve done better.”