Formula 1’s Azerbaijan Grand Prix was red-flagged late on because FIA race director Michael Masi felt a two-lap sprint to the finish was “in the best interest of the sport”.

Long-time race leader Max Verstappen crashed on the start-finish straight after a tyre blowout just as he was about to complete his 46th lap of 51.

His Red Bull team-mate Sergio Perez assumed the lead with five laps to go, but it took almost a minute and a half from Verstappen’s crash for a safety car to be called – a decision that angered Ferrari’s Charles Leclerc, who called it a “joke” and plans to raise it at the next drivers’ briefing in France.

Perez and the rest of the field completed the 47th lap through the pitlane, because of the debris on the straight. The race was then red-flagged, and so the field returned to the pits at the end of the 48th lap.

Masi opted to restart the race after a delay of roughly half an hour, which meant the safety car led the field round for lap 49 and then a full standing start was carried out before the race resumed for laps 50 and 51.

The two-lap dash was the shortest post-red-flag restarted race in F1 so far, beating the five-lap sprint at the end of the 2011 Monaco Grand Prix after Vitaly Petrov and Jamie Alguersuari’s heavy crash (pictured below).

Historically, F1 has had the option to declare races officially over if a stoppage occurs beyond 75% distance.

It could have opted to declare the Baku result as soon as the red flag was shown, or could have finished the race under the safety car.

That last happened in the 2020 Bahrain GP, following Perez’s engine failure, and before that at the 2019 Bahrain GP (the two Renaults retiring with mechanical issues) and the 2015 Chinese GP, when Verstappen’s Toro Rosso stopping on the pits straight meant the final four laps were in safety car conditions.

Masi said this time he prioritised finishing the GP in a full racing situation, and the decision to restart had been taken based on “the number of laps that we had to go, the recovery that was being undertaken, and the fact that there was so much debris on the pit straight”.

“At that point in my opinion the best option was to suspend the race, clean everything up, and then have a race finish,” he said. 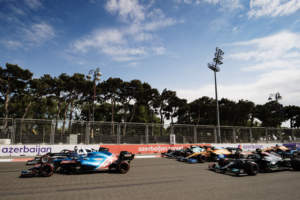 “For a number of years now, we’ve had the race suspension regulations. So going back many, many years ago, when a race was red-flagged after a certain distance, it would go back two laps and so forth.

“But obviously, with the race suspension element, yes, there is an option to not restart, but within the timeframe and within the format of the regulations, we can restart and there was no reason not to.”

A similar incident earlier in the race was not handled with a red flag but with a safety car. Lance Stroll’s left rear tyre failed earlier on the main straight, which triggered a caution period of around 15 minutes.

Masi said that was because time was not a factor at that stage of the grand prix and the recovery process could be undertaken without stopping the race.

“In the middle of the race, there was more than enough time and space on the right hand side of the track when we were recovering it,” said Masi.

“I was confident with the way that could be cleaned up in that fashion.

“When looking at everything [after Verstappen’s crash], we weren’t confident that the recovery on the pit straight and the amount of debris that was everywhere could be cleaned up in the appropriate time.

“So I thought it was in the best interest of the sport to suspend and then restart in that circumstance.”