Why Racing Point picked Hulkenberg, and the hurdles it cleared - The Race
Skip to content
Formula 1

Why Racing Point picked Hulkenberg, and the hurdles it cleared

Racing Point picked Nico Hulkenberg because he could “get up to speed easiest” of its Sergio Perez alternatives, but confirming him for the British Grand Prix “took longer than it should have”.

Perez tested positive for COVID-19 on Thursday which has ruled him out of the Silverstone race and, based on UK coronavirus guidelines, next weekend’s second part of the UK double-header as well.

Racing Point has access to Mercedes’ reserve drivers but Stoffel Vandoorne has the Formula E title-deciding races in Berlin next week and Esteban Gutierrez has not raced in F1 since 2016.

Ex-Renault driver Hulkenberg, who lost his place on the F1 grid for this season, spent several years with Racing Point in its previous guise as Force India. 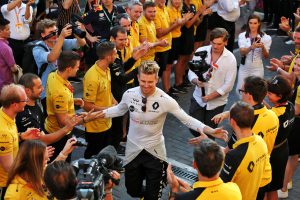 “Only having a day to prepare means that if you know the team, you’re that much further ahead and he knows who we are.

“He knows the engineers. He’s driven our simulator before he drove it this morning. So for him to get up to speed was the easiest out of all the other drivers that were available.

“And not to mention we think he’s got some talent as well.”

Perez had an inconclusive test on Thursday and had to wait for the result of the re-test, a process that does not automatically mean a positive case.

So Racing Point did not know it needed to source a replacement until Thursday afternoon, when it made contact with Hulkenberg – who “was on my way to the Nurburgring for another racing project when the call from Otmar came”.

“We discovered that at 2.20pm yesterday, so it has been about 24 hours, a little bit less, but from 2.20pm to just 10 minutes ago, we didn’t know whether Nico could join us or not,” said Szafnauer.

“You have to, with the virus, make sure that he doesn’t have it, which took some time, longer than we anticipated really and longer than it should have.

“But also we needed to go through the CRB [contract recognition board] and get a superlicence and some other things, so we got all that done.” 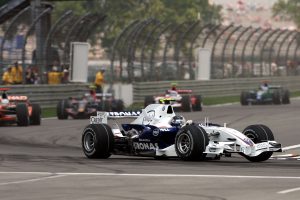 Perez said in a video he posted on his social media channels he flew back to Mexico to visit his mother between F1 races, as she had been in hospital following an accident.

At the season opener in Austria, Ferrari driver Charles Leclerc and Mercedes’ Valtteri Bottas flew to Monaco between races.

Szafnauer said the team and “Formula 1 in general needs to learn from this”.

“The virus is prevalent and we’ve got to take all precautions,” he said. “And when the drivers aren’t with us, for example, or other team members too, I don’t know how vigilant they are [about] wearing their masks for example, washing their hands, all that.

“So I think we have to be a little bit more protective of it and that’s for all team members.”