Lando Norris described his Italian Grand Prix drive as “one of my best in Formula 1” in terms of how he managed the race.

Norris finished seventh, but felt he should have been fifth ahead of Mercedes driver Lewis Hamilton but for several setbacks outside of his control.

Three factors conspired against Norris in the race. He made a bad start thanks to not being able to start in the launch map, suffered a slow first pitstop that cost him crucial seconds, and then made a pitstop under the late safety car that sacrificed a place to Sergio Perez that he never had the chance to take back thanks to the race not restarting.

Norris lined up third on the grid, having set the seventh-fastest time, thanks to penalties that dropped quicker cars behind him. But any chance of holding that position was eliminated when his team realised there was a problem accessing the launch map shortly before the start of the formation lap.

“We’re not in the launch map,” Norris was told over the radio. “We can’t get the launch map on so you can’t do anything about it. So the pre-launch is going to be difficult and you are going to have to control it.” 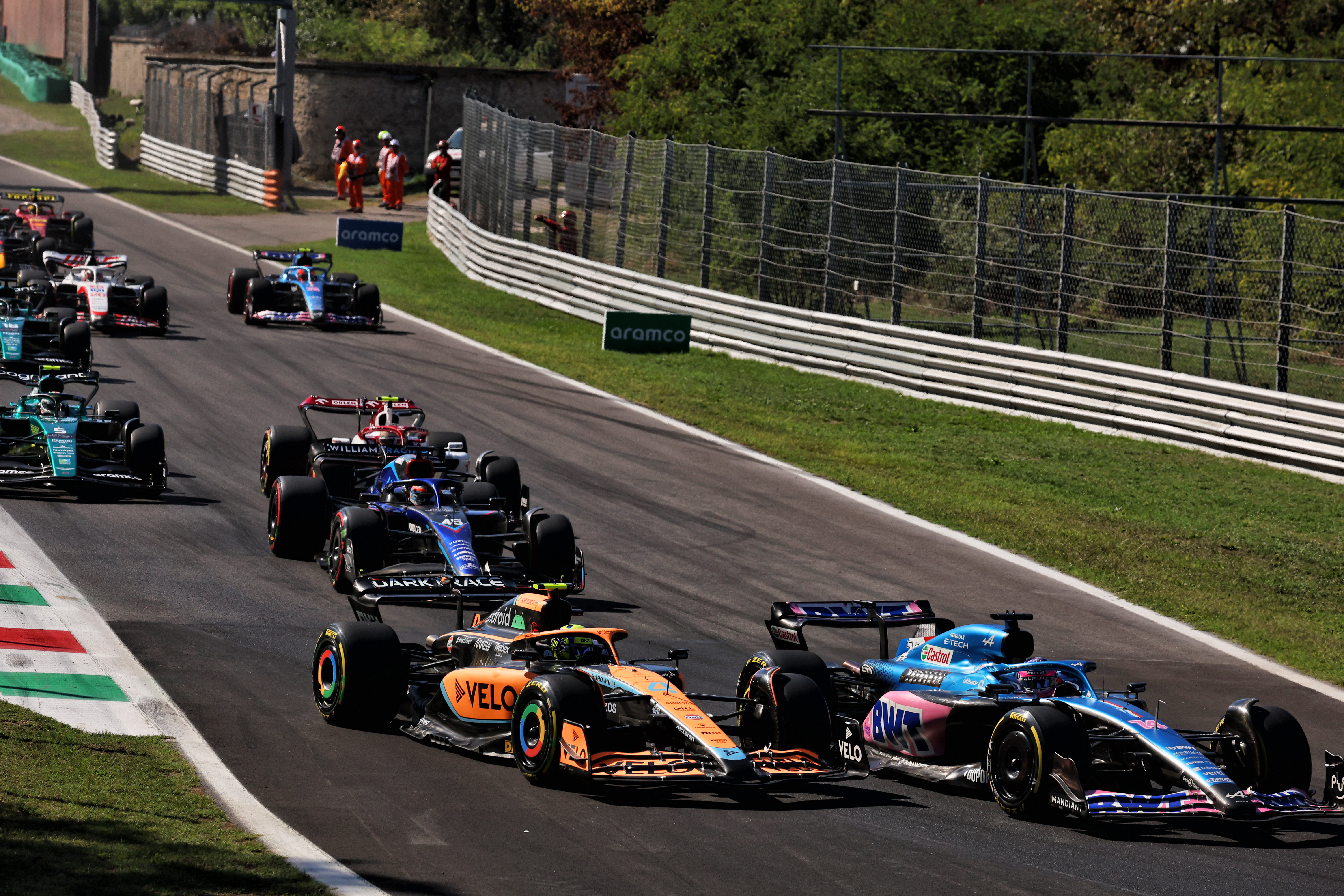 Norris bogged down at the start and was jumped immediately by Daniel Ricciardo, Pierre Gasly, Fernando Alonso and Max Verstappen. He even briefly fell behind F1 debutant Nyck de Vries’s Williams, but got back ahead under braking for the chicane.

“Nothing I could have done,” said Norris of the problem. “It’s just settings for the launch, which you need to have and you can’t adjust.

“I expected something poor. When the lights go out you have to react and you feel you’ve got it going, but [you go backwards]. 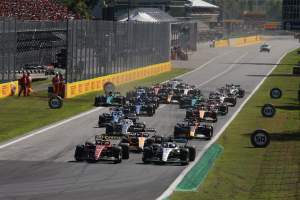 “It’s something that’s never happened [before] and probably will never happen again, hopefully.”

That left Norris seventh, but he was able to retake sixth from Alonso in a move that he started at the second chicane then completed at Lesmo 1.

At this point, three of the five cars ahead of Norris – Charles Leclerc, Verstappen, and George Russell – were not of concern to him as they had a big pace advantage and track position. But Ricciardo and Gasly ahead were beatable. He also had to cover Alonso, something he did achieve but not without an error given he temporarily let Alonso past when he went off at the first chicane after failing to make the best of the VSC restart. 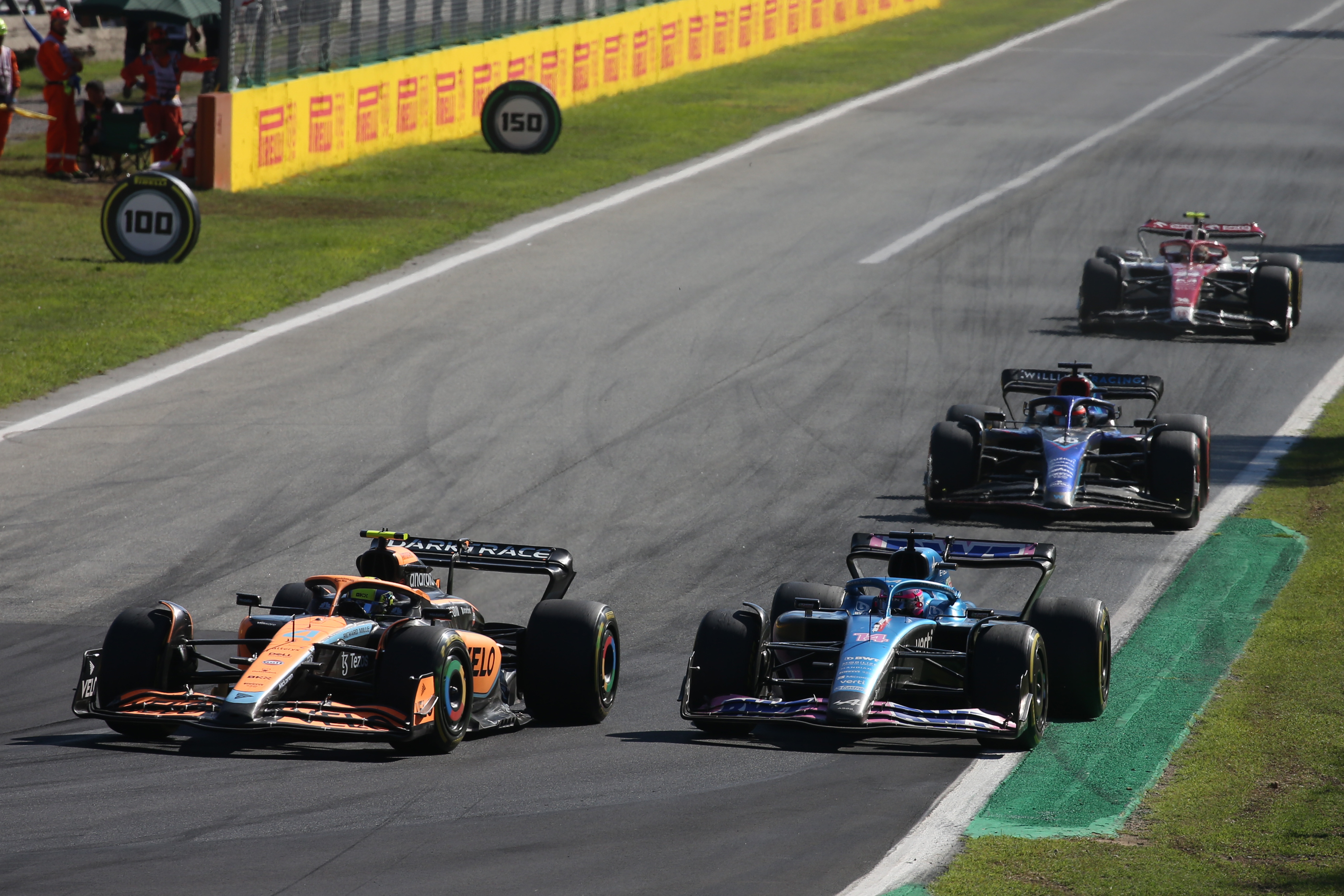 Gasly, suffering from front locking and struggling for traction, pitted at the end of lap 18. AlphaTauri lost around a second in that stop thanks to a slow front-left change, making it certain McLaren should bring in Ricciardo to cover the undercut.

But Norris was left out, opting for a long stint on his starting mediums. He pitted at the end of lap 35, along with Valtteri Bottas the last runner to head for the pits, with this stint the source of his pride in how he managed the race.

“I went extremely long on the first stint,” said Norris. 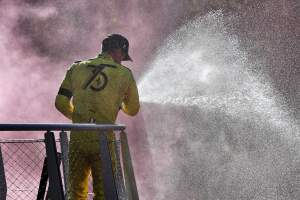 “I would say it was probably one of my best races in Formula 1 in terms of management and being patient with things and so on. One of the best I’ve done definitely this year, almost in Formula 1.”

During the build-up to the pitstop, Ricciardo had been instructed to hold up Gasly fractionally – by as little as a tenth of a second per lap – in order to ensure Norris had a big enough gap to emerge ahead. This was a logical move as it ensured McLaren could finish ahead with both cars. Ricciardo did his job, but the team didn’t.

Norris’s pitstop to change from mediums to softs took two-to-three seconds longer than it should have done, meaning Ricciardo blasted past approaching the chicane, with Gasly overtaking him through Turn 1. Hamilton then passed Norris and Gasly through Curva Grande.

That slow pitstop ensured that Hamilton beat Norris, although it would have been difficult to keep him behind.

“Whether or not he would have passed me after a few laps, quite possibly,” said Norris. “But we would have had a race and an opportunity.

“Maybe I could have hung on until the safety car? So fifth was where we should have been today, but we ended up seventh.”

Norris easily passed Gasly, with Ricciardo ordered to let him past. That put him back to seventh place, which became sixth when Perez made a second pitstop. 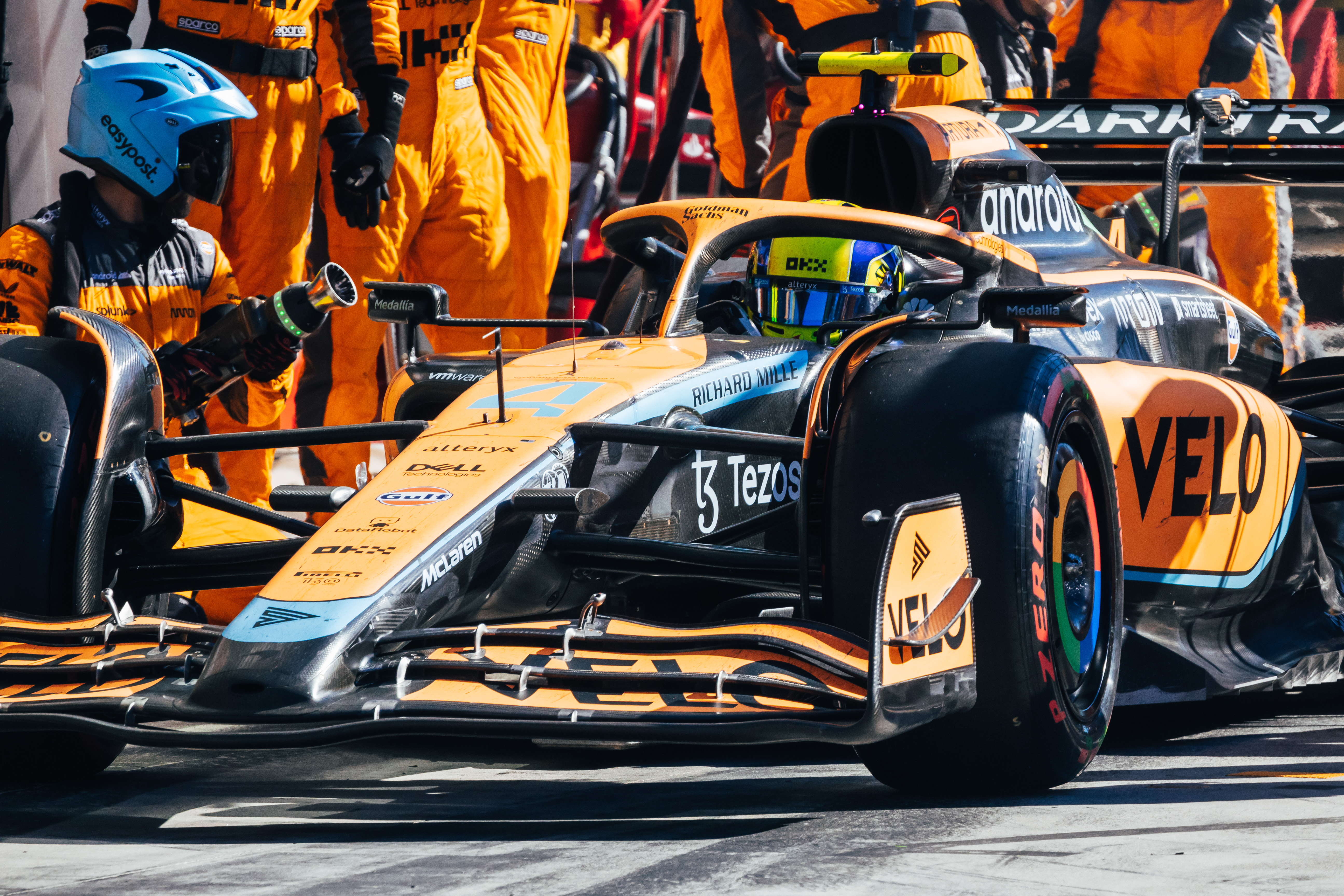 Perez was inching up on Norris when the safety car was deployed to recover Ricciardo’s stricken car. McLaren opted to bring Norris in for a fresh set of softs, ceding position to Perez in the hope of being able to take it back. However, as the race did not restart, that added up to seventh place.

“We probably should have finished fifth today so I’m a bit disappointed,” said Norris.

“Extremely poor launch because of incorrect settings. Nothing I could have done differently really. And then a poor pitstop that probably cost us the position to Lewis.” 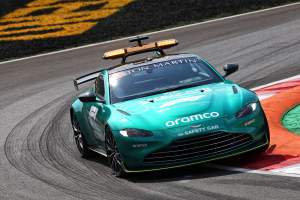 McLaren team principal Andreas Seidl admitted that “it might have been possible” to take fifth, but took the positives of McLaren outpacing Alpine.

“We had an issue with the settings at the start which lost Lando a lot of positions but he was coming back strong,” said Seidl.

“Even after losing the position to Fernando at the virtual safety car restart, we were actually in a position to just overtake him back on track, which was encouraging to see because we expected a lot more problems in terms of pace with our car this weekend. So that was very encouraging.

“And at the pitstop, unfortunately despite having a really good pitstops this year we had one of five seconds with Lando which then put him right into traffic with Gasly, Lewis and Daniel. He couldn’t benefit from the free air that we were supposed to have after the pitstop. 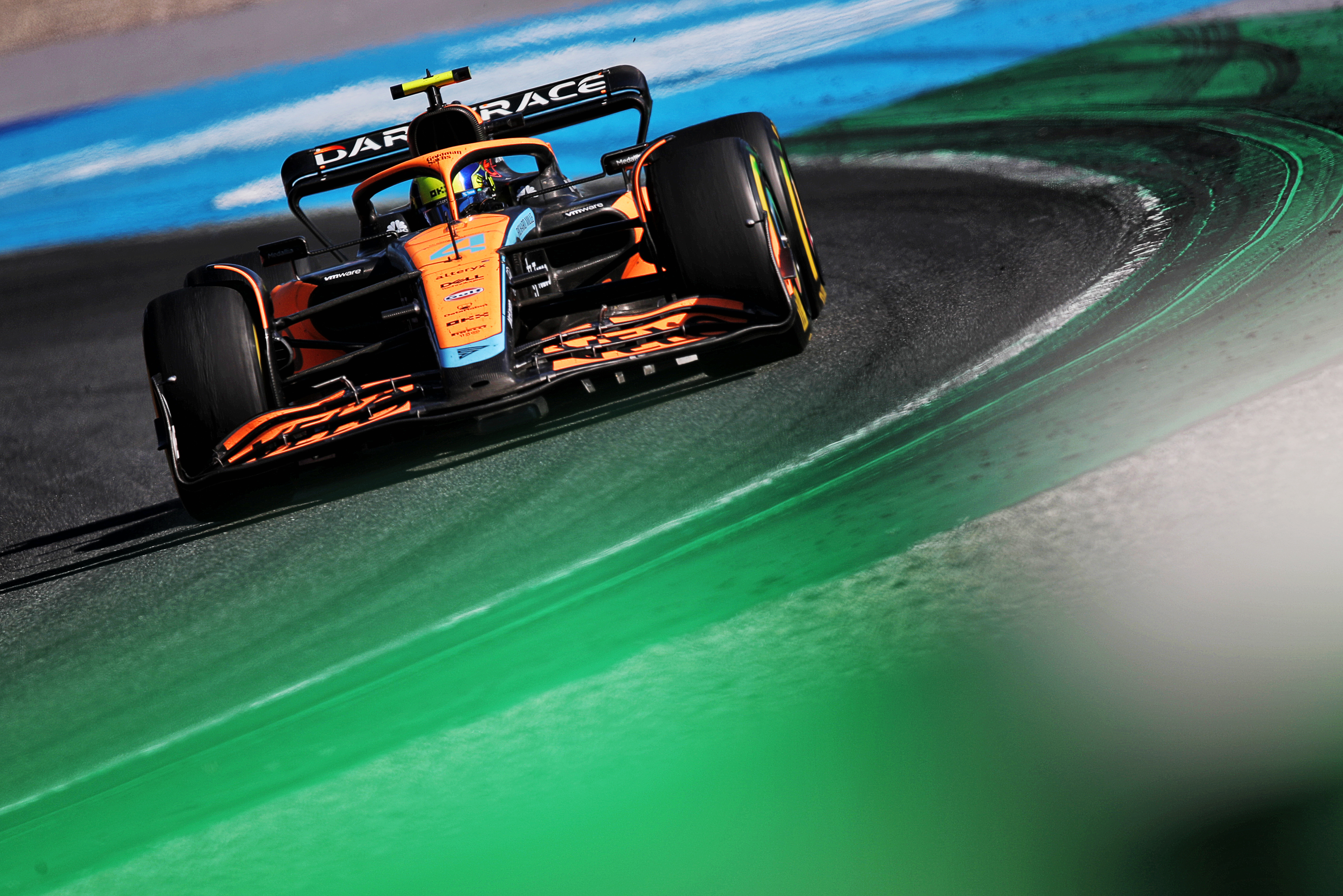 “So not a perfect race. There’s always things to learn to prove and that’s what we will try to do for Singapore.”

Off at the first chicane aside, it was a strong race for Norris – albeit not a perfect one. But it was strong enough to have given him the chance to beat one or two quicker cars that were out of position.

“Seventh doesn’t feel like it accomplishes a lot for what I feel like I did but that’s life,” said Norris.

“It happens and we’ll learn from it and move on.”