Charles Leclerc’s fourth place in the Italian Grand Prix was far from his most obviously spectacular drive in Formula 1, but despite that, he described it as “one of my top five performances”.

On a difficult weekend for Ferrari given it still has a power disadvantage, Leclerc was eighth fastest in qualifying on Friday, lapping 0.048s slower than team-mate Carlos Sainz, having battled an engine-related braking problem. 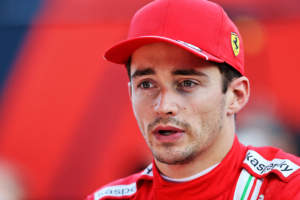 After changing to a previously-used power unit for Saturday’s sprint race, finishing sixth while feeling ill, he finished fifth on-the-road, having been shuffled back from second after the safety car. But he was promoted to fourth by Sergio Perez’s five-second penalty for gaining an advantage when he cut the second chicane while passing Leclerc.

“I gave it my all, really everything,” said Leclerc. “Every opportunity there was, I tried to take it.

“As soon as Valtteri [Bottas] passed me [for fourth] I tried to overtake him and I succeeded but they were just too quick, especially in the third sector and into Turn 1.

“It was very difficult for us to overtake but very easy to get overtaken, so not the easiest of races but if you look at where we were last year and where we are now, it is a big step forward.

“On my own performance, I rate it as one of my top five performances in Formula 1. I really think I’ve given absolutely everything.

“On that, I’m happy. But we need to keep working to be fighting for the win very soon.” 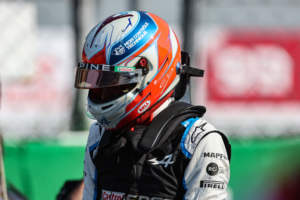 Given Leclerc’s satisfaction is more rooted in the consistent pace he delivered, his speed relative to Sainz is perhaps the most useful metric.

The gap between the pair was only 3.226s at the finish, but the fact the race was ‘reset’ by a safety car eliminated an advantage that had built to 11.2s by the end of lap 24.

That was an average pace advantage of 0.492s per lap, albeit with Sainz’s time loss exaggerated by battling with Perez and around two tenths per lap is a more realistic figure. That might not sound like much, but given Sainz is operating at a high level, it shows how hard Leclerc was pushing.

In the second half of the race, the laptime difference was more like a tenth of a second, although Leclerc was able to stay within five seconds of Perez while Sainz was not and the Monegasque was therefore not running in clear air.

Leclerc also suggested that the way the Ferrari was set up at Monza made it relatively pointy, a characteristic that many drivers struggle with but that he excels at handling. That perhaps explains why Sainz was never 100% comfortable despite being relatively quick.

“It was tricky,” said Leclerc. “I think our pace today was actually quite strong but we had to put quite a bit of front end this weekend, so it makes it quite challenging to drive during the race. 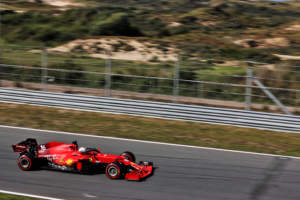 “But I found the right feeling with the car and I really enjoyed the race.

“I feel like I haven’t done many mistakes during the race and it always feels good.

“In all of my race we were really on it so I was happy with my performance after the race.”

Leclerc’s drive lacked anything in the way of dramatic overtaking manoeuvres or a marathon tyre stint. But his pace allowed him to be close to the McLaren, Mercedes and Red Bull machinery that clearly had an advantage.

Leclerc has produced drives based on this in the past, with his crushingly dominant maiden victory for Ferrari at Spa in 2019 springing to mind. At the next race at Monza he took a dominant pole position and then had to drive the wheels off the car to keep Lewis Hamilton at bay.

Leclerc has driven many superb races in his 72-start F1 career. This was undoubtedly among them, even though it will not be conspicuous in the record books.