Why it was Renault or bust for Alonso

Renault would not be Fernando Alonso’s, or anybody else’s, first choice for a Formula 1 drive in 2021.

But beggars can’t be choosers, so it was now or never for the 2005/06 F1 world champion if he wants a shot at a third title. It was accept a berth with a potentially upwardly-mobile midfield team or nothing.

It’s as good as impossible that Renault will be in a position to win the world championship next season, although all bets are off for 2022 given the seismic regulation change that has the potential to shuffle the competitive order dramatically.

But this is all about necessity for Alonso, who does not have the luxury of waiting for a top team to come calling anymore.

You could interpret this decision as proving that he has seen something in Renault that convinces him it’s the place to be. He will have had a very close look at the way the team works and doubtless been given the hard sell.

But all Renault needed to do was to offer him what he needs most of all as a pre-requisite to achieving that elusive third world championship: a foot in the F1 door. 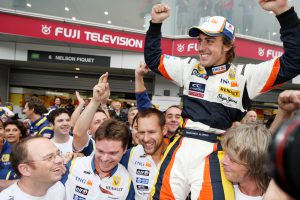 It seems almost insulting to insinuate that a driver who has won 32 grands prix and two world championships is reduced to the status of a rookie chasing his big break, but the curious course of Alonso’s career means that’s his situation.

The days when Alonso had his pick of destinations in F1 are long gone, so he must fight for the opportunity he craves. And Alonso is nothing if not a fighter. For the chance to do that and get back in the game, he has to cut his cloth accordingly.

That doesn’t mean he would simply sign up for any opportunity. But what Renault needed to do is convince him not that it was a surefire title contender over the next three years but simply that, along with that possibility, it had at least to offer him the equipment to show he’s still got it. That will mean he can allay the question marks growing larger against his name while on the sidelines.

Alonso remains a brilliant driver, an all-time great who has enhanced his reputation with his performances outside F1 over the past 18 months. But he will turn 40 during the 2021 season and we haven’t seen anyone in their fifth decade win a grand prix since Nigel Mansell triumphed in Adelaide in 1994. And even that was a one-off, meaning you have go back another quarter of a century to the time when this was remotely commonplace.

Renault is a platform good enough to show the top teams that Alonso’s still there, relevant and as good as ever just in case they have need of him

There’s no reason why Alonso cannot do it at his age. While he is at a point where there’s some unavoidable deterioration, it won’t be significant and his experience will compensate. But that’s theoretical while he stays away from an F1 car having not driven one competitively since the end of 2018.

Had he spent more than two years out of F1, he would have been perceived to be over the hill and out of touch. Whether that’s a fair portrayal or not, it would mean his hopes of ever getting back into a title-challenging car had faded to nothing. Michael Schumacher’s comeback with Mercedes from 2010-12 was not the disaster some portray it to be, but it is a cautionary tale for anyone considering relying on an ageing superstar.

So signing for Renault isn’t just about the hope that it will break through as a race-winning team, although Alonso will certainly be hoping it does. It’s also about having a platform good enough to show the top teams that he’s still there, relevant and as good as ever just in case they have need of him.

Over the past couple of years, Alonso has been a handy ‘spare’. Should any of the big three teams have needed a proven title winner unexpectedly, be it through Nico Rosberg-esque retirement, serious injury or even worse, who else would you call? While it was a long shot, Alonso could cling to the hope one of the powerhouse teams might reluctantly have to cave in and go to him, cap in hand.

But that lustre fades with time and has to be refreshed. To keep himself in contention for one of those top seats, Alonso had to be on the F1 grid in 2021.

He might not be the most effective politician among the drivers given some of the twists and turns that have made his career so bizarre, but he will have been very aware of this when he made his choice. If he delayed his return any longer, there would be no return.

That’s why this is only a partial endorsement of Renault. Alonso will certainly be hoping the team really can fulfil its potential and there’s still an enormous depth of skills and expertise at Enstone. The success Alonso was key to in winning back to back world championships in 2005-6 proves that and there would be a delightful symmetry if they could recapture that glory together. 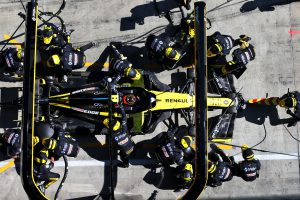 Alonso will have been given a huge depth of insight into goings on both at Enstone and Renault’s engine base at Viry. But he will know that, for all its potential, there’s no guarantee of it breaking through given its stuttering progress over the past 18 months. As for F1, it would only benefit from having Alonso and Renault up front.

The best case scenario is Alonso gets his eye in in 2021 and Renault manages to produce a stunning car the following year so he can fight for the title over the next couple of seasons. You would not bet the farm on that happening, but that doesn’t mean this move will be a failure for Alonso.

In the worst case scenario, Renault would struggle on at its current level of being a minor points finisher and still give him the equipment to prove he’s motivated, sharp, as quick as ever and current.

That will ‘top up’ his credibility with top teams and give him a chance, however slender, of an alternative berth that could give him a title push. Doubly so if he can show he is able to do the job without shining too intense a spotlight on any Renault failings, something that has backfired on him in the past.

This is a marriage of convenience for team and driver. Just as Renault would not have been Alonso’s first choice, so he was the only top gun available to a team that would surely have been happier to sign a Lewis Hamilton or Max Verstappen.

But make no mistake. Alonso is not coming back to F1 to make up the numbers and will bring every iota of his prodigious talent to the table as he chases that elusive and unlikely third world championship. Don’t underestimate his brilliance, or capacity to do something incredible in unpromising circumstances.

What a final chapter it would be for the grand prix career of one of the greats if he really could do it.