With the total absence of real-world motorsports, an increasing number of drivers have taken to virtual racing instead.

Haas Formula 1 driver Romain Grosjean is one of the latest to dip his toes into esports, having recently launched his own esports team that will make its debut this weekend for the iRacing 24 Hours Nurburgring. 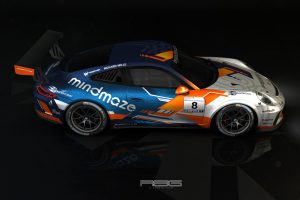 He started sim racing three weeks ago, having not played any racing games in a big way for 10 years.

But while current F1 drivers such as Charles Leclerc, Alex Albon and Lando Norris have all taken part in F1’s Virtual GPs, Grosjean has currently declined joining in despite pressure from F1 to do so.

“The F1 game I’ve tried a little bit and didn’t get a great feel initially so I put it aside and went more into iRacing,” Grosjean told The Race.

“I, for some reason, appreciate the GT cars and I feel iRacing is a little bit more realistic in terms of how the car behaves.

“I think I’m not the only one with that comment I believe.

“I know F1 really wants me to join and I would love to, but still, if it’s me two seconds off the pace it’s a bit tough.

“What you’re missing is the sensation, the feeling of speed that you don’t get, and that’s the same in the simulator, you know with the multi-million [pound] F1 ones, so I guess the limitations are kind of the same in that aspect,” Grosjean said.

“It’s a bit of a full job at the beginning, understanding the fuel level, if you do or don’t change tyres in a race which I didn’t even know how to select in the beginning” :: Romain Grosjean

Having spent a decade away from playing racing games and sims at home, he’s had quite the learning curve getting up to speed on iRacing.

While he admits he’s far from the quickest driver on the platform, he’s enjoyed moving up the ranks and learning all the virtual racing tricks.

“Well it’s great fun, there’s a lot of really interesting stuff like the setup and so on needs to be spot on,” Grosjean said.

“It’s a bit of a full job at the beginning, understanding the fuel level, if you do or don’t change tyres in a race which I didn’t even know how to select in the beginning so I was like ‘why am I so slow in the pitstops?’ and I was told ‘because you’re changing tyres’.

“There’s a lot of things you need to learn but it’s good fun.”

Other motorsport championships have adopted iRacing as their sim of choice for their esports counterparts, including IndyCar and NASCAR.

Norris is set to join the IndyCar iRacing Challenge for this weekend’s event.

Grosjean’s much more interested in participating in those events, although doesn’t yet have the iRacing credentials or experience needed to join in. 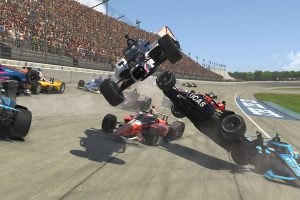 Being a father of three children hasn’t helped his progress on the sim either.

“I need to find the time to do my license because at the moment I don’t think I could do the races on ovals”.

“It’s just as I say timing and having kids at home doesn’t always make it that easy.”

A full breakdown of Grosjean’s new sim racing team and his ambitions for the project is also expected soon.