Alpine approaches Formula 1’s new rules era in 2022 with “a mix of fear and excitement” given the combination of the opportunity presented and the uncertainty of the regulation changes, according to executive director Marcin Budkowski.

Although the brand claimed its first victory in F1 in the Hungarian Grand Prix, which was also the Enstone team’s first win since the start of 2013, it is still firmly an F1 midfielder with the sixth-fastest car on average this season.

That Hungaroring success, with winner Esteban Ocon backed up by Fernando Alonso’s fourth place, lifted it to fifth in the constructors’ championship ahead of AlphaTauri, but since Renault re-acquired what was then called Lotus at the end of 2015 it has never broken clear of F1’s midfield.

But the rule changes next year do offer the chance for Alpine to take a step forward and potentially close on the frontrunners.

“It’s a mix of fear and excitement,” Budkowski told The Race.

“Excitement because the technical team is relishing the challenge because it’s new and there’s freedom. Although the regulations are constrained, you start from almost a white sheet of paper, so it can be quite exciting.

“The fear element is linked to the fact that we know what we are doing but we don’t know what the others are doing. So are we missing a clear direction or a loophole? Are we heading in the right direction?

“You’re working in the dark a little bit. We know what we are doing, but don’t know what other people are doing, and we only going to discover that in February or the beginning of March next year when all the cars hit the track. And that’s the same for everybody.”

Renault has invested heavily in the team over the past five years, bolstering facilities and personnel. But it has still lagged behind F1’s three biggest teams – Red Bull, Mercedes and Ferrari – in terms of budget.

That the new regulations follow the introduction of a cost cap this year does even up the playing field, but despite the opportunity presented Budkowski warned that the leading teams will retain a baked in advantage from historic investment.

“There’s opportunity, but equally when people say there’s a cost cap, everybody spends the same and starts from the same point, well that’s not quite true,” said Budkowski.

“You still have teams that have spent, massively invested in their technical infrastructure, investing in building a team, recruiting people, building the tools, the methodologies, they are using to develop the cars. They still have a big advantage.

“Now they are not able to spend as much as they were before and therefore the gap is not going to increase any further, and with time it should start reducing in terms of the gap between the top teams and the others. But it is certainly not going to be immediate.

“So, the best teams will continue benefiting from all the work and all the investment they’ve done in the last few years. But they could also get it wrong if they choose the wrong development.”

One aspect that Budkowski believes does help the teams playing catch up is the fact the 2022 regulations were delayed from the original plan to introduce them in 2021. This was a result of the COVID-19 pandemic.

But it’s not the extra time that makes the difference, but the fact that it means the development for the new rules was done under the cost cap regulations that came in in 2021. There were no such constraints in 2020 originally, so it would have allowed the teams with the biggest budget to pile resources into the new cars. 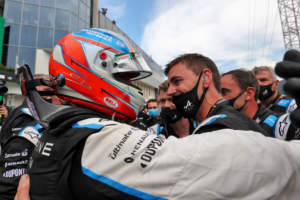 Instead, 2022-car aerodynamic development was suspended until January 1 this year, which eliminated some of that potential advantage.

“There’s one big benefit that came from delaying the technical regs,” said Budkowski. “Initially, the cost cap and the new set of regs were supposed to start in the same year and that means to develop the car for the new regulations, which obviously is more expensive because you have more research and new parts, that would have been done without any limitation of resources.

“It would have favoured the biggest teams with the biggest resources. Now, the development of the 2022 cars is under a cost cap, which for us is positive because at we are not affected by the cost cap [in terms of having to cut back].

“So it means that other people would have been spending a lot more than us and now can’t do that. So that’s a positive.”